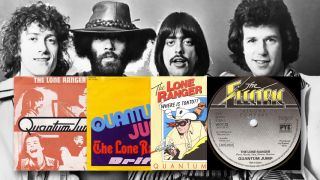 A lot of records Rupert Hine was involved with hit the charts. Only one of his own did though…

First released in 1976, it was banned by the BBC because of its drug and homosexual references. A year later the band split. But the single was reissued in 1979 after Kenny Everett championed it on his TV and radio shows. As a result Quantum Jump reunited to appear on Top Of The Pops, with the single finally selling.

Where did the inspiration for The Lone Ranger come from?

“One has to bear in mind that Quantum Jump’s self-titled album was a relatively serious effort at blending the jazz-rock of the mid 70s with a more song-based concept. In that context The Lone Ranger was a somewhat frivolous last-minute idea; intended to be lighter-hearted to balance some of the more serious, stylistic integration.

“When presented to the record label, it stood out merely because the chorus was memorable and the groove simple. At this point there was no reference to the Maori language.

“The only criticism the label had (because they otherwise thought it had single potential) was that the intro had no real character and the common wisdom of the day was that a single had to have something in the first 15 seconds to grab your attention. I had been told this several times as a producer of songs for other artists and had become somewhat jaded by such repetitious advice.

“This all coincided with a casual flick through a copy of the Guinness Book of World Records whereupon I stumbled across ‘the longest word in the world’. Realising that it had a remarkably unique, percussive quality and having the good fortune to have Manfred Mann in my studio at the time - Chris Thompson, their singer, was from New Zealand and he was tremendously helpful in writing it out phonetically for me. I got more excited when realising that it was so rhythmical it started to have a life of its own and then, light bulb of light bulbs…why didn’t I ‘stuff that up’ the first 15 seconds. That’s interesting!

“And thus the idea was born; a completely arbitrary opening phrase that was instantly adored by the label and recapitulated as a middle-8. Of course. On the one hand I felt I was getting my own back by coming up with such a ludicrous idea - whereas in fact I was merely cementing the truth of their original request.”

“It seemed immediately that the most common reaction to hearing the single was that of a) wondering how on earth I had learnt it i.e. how had I learnt to pronounce and deliver it and b) an insatiable appetite that other people seemed to have, to want to have a go and learn it themselves.”

“The single took a few months climbing up the charts and that meant, for quite a while, I was on Top of the Pops every other week. By the time it reached the top 10, I was indeed, getting recognised on the street and the timing was perfect in that I was just in the process of raising funding for building a recording studio and this ‘successful presence’ was duly noted by the financial team behind the project.”

“Within the perspective of the band, it was a light-hearted excursion from our main oeuvre and as such didn’t really affect the overall balance of its musicality. For the work that I was just about to do on my solo albums for A&M, starting only a year or so later, such superficial japery was an awkward obstacle.”