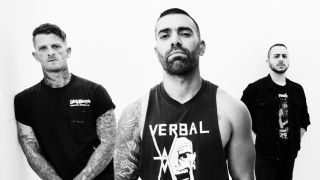 New York crossover thrash metallers Extinction A.D. credit a wide variety of genres, styles and bands as being influential to them, from the obvious ones (Slayer, Metallica, Anthrax, Megadeth) to Vision of Disorder, Biohazard, Black Sabbath, Pantera and L.A. hard rockers, the legendary Guns N' Roses.

Ahead of their UK tour this July (scroll down for tour dates) guitarist and lead vocalist Rick Jimenez counts down the top 10 Guns tracks that made a lasting impression on him and his music.

"Is there any song that sums up the essence of Guns N' Roses more? Calling out the music media of time by name, accusing them of ripping off the fans with lies and then challenging them to physical fights? No band with any notoriety these days would even dream of having the balls to do this. 'Bitchy little ass' is such a rad dig as well."

"In the pre-internet age, you were a bit of a champion if you had seen the absurd video for this song being that it was never a major single. Even though this may be the 'lesser known' of the Use Your Illusion monster ballads, its a fucking masterpiece from start to finish.

"I did a more metal version cover of this song as a commission a few years which is information no one really cares about but it made me appreciate this song even more."

"Talk about a song that just builds and builds and builds. Theres a reason why GN'R has been closing with this song for 100 years and its because its the ultimate climax of a rock song. Slash’s noodling at the end is legendary.

"The countless vocals tracks are so signature to all of Axl’s strengths and of course the whistle. Hey, if you can add a coaches whistle to a song and have it be awesome as opposed to corny as hell, maybe you can sellout Metlife stadium two days in a row, too."

"This was the perfect 1988 MTV song and probably an abomination at karaoke bars across the world. I used to think it was hilarious that all the guys in the video had a human girl with them but Izzy was featured with just his dog. Izzy rocks."

"What a mindfuck this song was, start to finish, when it first came out. When I got UYI 1 I couldn’t understand why there was so much piano on a GN'R record but especially this song, but i kind of liked it anyway. Its an amazing piece of music by everyone involved.

"That one drum fill Sorum does over and over is so simple and perfect and to state the obvious, Slash is a genius with his lead work here. When the video came out, that took the song to a whole new level. 'Hey, what the fuck is this song even about now and why is Axl’s wife’s face cut in half?!' Maybe we can tweet Del James and find out."

"So this is a song that I’ve gotten the whole 'why do you like that one so much?' in the van over the years. I don’t know the goddamn answer. Don’t Cry is very simple and basic and theres not really much to it, I just think this song rules.

"I love the vocal patterns throughout the whole song, the understated (for Slash) guitar solo and the build towards the final chorus/outro of the song. This is one of my favorite songs to sing terribly to when no one else is around as opposed to our own songs that I sing terribly at our shows where there is usually, you know, no one else around either."

4. Welcome To The Jungle

"Obvious choice here. First track on Appetite and the 'Hey world fuck you we’re here!' that made Guns N' Roses Guns N' Roses. Its such a rock music staple now that it should feel old and overplayed and passé, but to me, its still fresh and gets me pumped.

"That guitar sound is so special and pristine. This song is so heavy without really being heavy, especially by modern terms. Theres such vigor and attitude. This song is perfect."

"Being that this is my list, I can say for certain that Patience is my favorite power ballad of all time and a complete work of art. Axl’s whistling here is so iconic to me and the acoustic guitars playing off each other with the GN'R looseness is so signature. The dual vocals at the end is still masterful.

"If you were watching MTV in 1989 and didn’t imitate Axl swinging the mic cable before coming in at the end then you are a complete dork. If you weren’t alive in 1989 then go and rent yourself a Wrestlemania 5 VHS and eat a bag of Doritos while watching it. If you don’t understand any of what i just said then go to Extinction A.D. on Instagram and hit like on something and hit on someone through Tinder maybe."

2. You Could Be Mine

"Any speeding ticket i’ve ever gotten could probably be attributed to this song. This is audio Redbull and as badass of a song that exists. Despite being a late track on UYI 2, its in my opinion the best of the two records and could have easily not just fit in on Appetite, but been one of the standout tracks.

"I’m pretty sure i’m going to convince the rest of the guys to learn this song so we can cover it ourselves right now because its so rad. And if that’s not enough, it was the song attached to Terminator 2 when movies and music were co-promoted heavily. Terminator 2. One of the most badass movies of the 90s. It all makes perfect sense. I may get in my car now and rack up another ticket."

"ASSBEATER! Musically. Lyrically. Energy. Attitude. This song is such a goddamn assbeater its hard to hear it and not immediately wanna smash something or someone. All in good fun but still…smash. I remember getting in trouble in 3rd or 4th grade listening to Appetite in my headphone at lunch and saying out loud 'why don’t you just… FUCK OFF!'