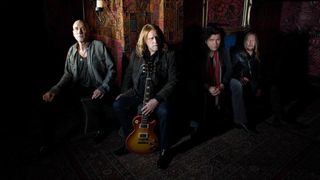 Formed by Allman Brothers Band guitarist Warren Haynes and bassist Allen Woody in 1994 as an offshoot of their man band, Gov’t Mule – or just Mule to their fans – quickly took on a life of their own.

Establishing themselves as part of the jam band scene that included the Grateful Dead, Phish and Dave Matthews Band, Gov’t Mule took pains to ensure no two gigs are the same – an ethos that remains today.

From the outside looking in, theirs is a complex world, full of special guests and punctuated by albums of other people’s material, but should you wish to take a day trip with a view to making a larger commitment, these are the 10 essential songs Mule you need to hear.

When Warren Haynes wrote this infectious pop song it reminded him of Elvis Costello & The Attractions, so he asked Costello to guest on it. “Elvis more conscious of our world than I had expected, he’s a huge fan of the Grateful Dead,” Haynes said. Two versions of this song appear on Mule’s 2013 album, Shout! – the first starring Costello, its companion sung by Warren.

Haynes is revered as a guitar player, and quite rightly so, though the flipside of is that his voice tends to be overlooked. This lovely mid-paced number is built around a forceful yet emotive delivery, which often lends itself to the band veering off into When Doves Cry by Prince when played live.

Later recorded by The Allman Brothers Band when Haynes re-joined the group for the album Hittin’ The Note, this is one of Gov’t Mule’s oldest and best loved tunes, dating back to their self-titled debut. The pumping contribution of Allen Woody, the co-founding bassist who died five years later, is among the many selling points of a belting little blues-rock tune.

The spirit of ZZ Top drips from this tough, propulsive boogie number from the band’s third album, Life Before Insanity. The lyrics – _‘_Come in with the sunrise, who knows where you go/Smellin’ like something, I don’t want to know’ – mix references to canine and female behaviour. Onstage it really comes to life and over the last 16 years it’s become a firm crowd favourite.

Another song that showcases Haynes’ ability as a lead singer. He submerges himself in the dark claustrophobia of its lyrics – _‘_Now I got that sinking feeling/Though I try to brace myself/I can feel me start to surrender, sweet surrender’. An alternate version exists that features Jim James of My Morning Jacket on vocals. It ain’t a patch on the way Warren sings it.

After Haynes and bassist Woody opted against returning to The Allman Brothers Band, making the Mule their main focus, the group noticeably upped their game on a second album, Dose. Blind Man In The Dark is its hugely popular opening track, built upon a decent sized hook but with enough gaps for the band to really kick out the jams onstage.

Another of the band’s earliest tunes, Mule stands as a good example of their modus operandi. On the debut album the song was a little over five minutes long but onstage, fuelled by Haynes’ wonderful fluid slide playing and the group’s quick-change interaction, Mule can stretch out to more than twice as long, but doing so without sounding forced or premeditated.

The unmistakable sound of ZZ Top’s Billy Gibbons dominates this excellent hard rocking funk workout from the album By A Thread. It’s spicy stuff, and no mistake. Haynes and Gibbons exchange solos at length during its closing stages. Indeed, it’s frustrating when the song finally fades out after more than six sizzling minutes.

Strictly speaking, given that this Haynes-penned track first appeared on the Allman Brothers Band’s 1994 album Where It All Begins, Soulshine is an Allmans song. But it’s also a live favourite at shows by the Mule, and rightly so – an uplifting, summery track fashioned around Haynes’ plaintive sing-song guitar melody.

Despite the plaudits showered on Haynes, Gov’t Mule is most definitely a band. A staple of their repertoire since Dose, Thorazine Shuffle allows the entire line-up to excel, drummer Matt Abts revealing deft percussive versatility in tandem with a funky walking bass line and some delicious electric piano work. You can almost feel the rippling of the song’s power, though the control of the players is pretty staggering.