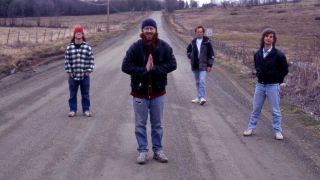 For the UK music fan, the extraordinary success of jam band Phish is one of rock's more curious anomalies. They're almost invisible in The UK, and even in their US homeland they're frequently ignored or derided, part of a scene that appears to exist in complete, glorious isolation from the mainstream.

Yet, successful they are. Formed in 1983. Phish now gross an average of $1.5 million a show. And this weekend they'll host their 11th festival, Curveball, held at the famous Watkins Glen NASCAR racetrack in Schuyler County, New York.

They'll play seven sets over the course of three days, and while there's no support acts, the 'Phans' won't be short of activities, which include a Cornhole Tournament, a WiffleBall Free-For-All, and Survey Says!, a game in which aPHISHianados (we just made that up) answer Phish-related survey questions.

Tickets are sold out, but all three days will be webcast live on livephish.com.

Below are the Top 10 Phish songs

Page McConnell uses George Gershwin’s Rhapsody In Blue as a springboard for this early beauty, co-written by Trey Anastasio and his lyricist friend, Susanna Goodman. Its reflective tone and lysergic verses find Phish in more measured form, although the song later became an improvised live favourite that exceeded the 20-minute mark.

Inspired by the rented Vermont barn in which it was recorded – and lifting its lyrics from the semi-cryptic note that welcomed them: “We have cluster flies this time of year. There is little we can do” – Phish cook up a crowd-pleaser that finds the soft spot between Boston and Bob Marley’s Wailers.

Lyricist Tom Marshall’s rebuke to the mononucleosis that confined him to his sickbed for a time, fleshed out by Trey Anastasio’s P-Funk guitar licks and a strident groove. This also carries the distinction of being the only Phish song to warrant a music video, in which the band scuba dive through an aquarium.

This mutable jam serves as a perfect summation of Phish’s M.O., changing its rhythm and texture freely from one show to another. Initially put together at a 1989 soundcheck, it’s since grown into a live perennial, usually accompanied by the equally impressive Tweezer Reprise. The best song known to man about walk-in refrigeration.

The closest Phish have ever got to a signature tune, its origins date back to Trey Anastasio’s time busking around Europe in the mid ‘80s. The song succeeds as both a free-flowing jam and intricately-arranged piece, finding a new pair of wings in its live setting (see 1989’s A Live One) with all four members contributing to a percussive vocal section.

A near ten-minute epic that steadily morphs from cordial white-boy funk into a grand cosmic flourish, as Trey Anastasio’s guitar frolics over Jon Fishman’s ticking rhythm and Page McConnell’s piano. It all climaxes with the Floyd-ish declaration: “Set the gearshift for the high gear of your soul / You’ve got to run like an antelope, out of control”.

This show-stopping homage to the Boston-based Hood Dairy Company emerged after various band members had lived next door to one of its milk plants. A loping rhythm propels it forwards, leading to a much-loved Phan chant (“You could feel good about Hood!”) and, in its live setting, the unveiling of a sea of glowsticks.

A dense, complex song-suite that follows the travails of a man with an unnamed “horrible disease” with no cure. The tricky arrangements manage to be both tight and fluid, running through prog-folk, jazz and neo-psychedelia as each section – Fluff’s Travels, The Chase, Who Do? We Do!, Clod, Bundle Of Joy and Arrival – gives way to the next.

Having developed from a piece called Log (so named because Trey Anastasio used firewood as percussion), Divided Sky is a glorious 15-minute stretch inspired by the sight of parting clouds while under the influence of magic mushrooms. Shifting time signatures abound, held loosely together by one of the band’s most distinctively melodic hooks.

A hypnotic tour de force from Trey Anastasio, this extended four-part groove encapsulates the full Phish aesthetic: devilish guitar work, soaring peaks, surprising chord changes and downright bizarre lyrics that owe much to the grandmaster of the absurd, Frank Zappa. It also houses one of its creator’s most memorable guitar solos.