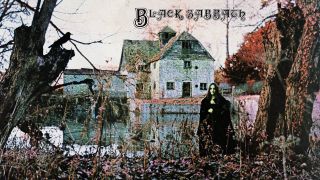 The 1970s was the era that defined everything we know, love and even laugh at when it comes to heavy metal. It was a glorious time when the rules didn’t exist and a free-spirited attitude allowed for the birth of a genre – one that took the hard-edged sound of late 60s bands such as Cream and The Who and twisted it into something new.

Not that anyone called it ‘metal’ back then. It was heavy rock, or hard rock – a fusion of blues, psychedelia and biker attitude. Fans were drawn together by devotion to loud guitars, macho image and something far removed from the trends of pop, disco and punk, which dominate the mainstream.

To be honest, there’s no real definition of 1970s metal, because it encompassed a wide church. And that’s exactly what it was – a religion. It was an era of true pioneers, accentuated by naivety and innocence. When giants were born. And, let’s face it, the great metal bands of that time still reign supreme

The album that sums up not just 70s metal, but the appeal of the whole genre. The title track is the embodiment of everything for which metal stands. Ominous, brooding, mysterious, epic, it’s the closest that any song could possibly get to representing heavy metal with its stark, raging distortion of the blues filtered through a British, working class framework. The fact that the production values are virtually non-existent adds to the timeless quality of songs like The Wizard and N.I.B. This was genius through simplicity, a monument to innovation through lack of resources.

It’s got Highway Star, Space Truckin’ and, in Smoke On The Water, arguably the ultimate guitar riff. Purple Mk II’s finest hour remains a testament to the way that metal can mix evocative atmosphere, stunning musicianship and crushed velvet vocals. Its rapacious mix of virtuoso moments and force of will has inspired countless bands over the last 30 years. Each song has every last drop of inspiration wrenched out, and you’re never left in any doubt that this album showcases one of the all-time great bands at the height of their very considerable powers.

Kiss became a cultural phenomenon with this double live album. It was a last throw of the dice for the band, but it worked. Brilliantly, in fact. Always a huge live draw, they cunningly brought together all the finest anthems from three previous studio records, and let rip before thousands of ecstatic fans. It sounded utterly compulsive. No wonder generations of kids took to standing in front of mirrors, wearing their mum’s make-up and waving clenched fists while hollering along to Rock And Roll All Nite or Strutter. How many of them went on to their own piece of stardom?

“If it’s too loud, you’re too old!” declared the Nuge, as he destroyed eardrums across the globe on this, his solo debut. And it more than lived up to expectations. After carving out a niche with The Amboy Dukes, Nugent threw away all thoughts of subtlety and cranked it up louder than everything else.

This is an album dripping with classic moments, from Stranglehold to Stormtroopin’ and Motor City Madhouse. No prisoners were taken, as Nugent set out to prove he was the craziest mutha ever to wield a Gibson Byrdland guitar in anger – and he was, too.

It was with this album that Priest found their range and inclination and became one of the premier cornerstones of metal. After tripping over their own talents with debut album Rocka Rolla, the band came of age here. The twin guitars of Glenn Tipton and KK Downing locked with both barrels firing, while Rob Halford’s voice soared and burnt. Victim Of Changes, The Ripper, Dreamer Deceiver, Tyrant and Genocide still send shivers down the spine. The album wasn’t just a landmark for the band, but also for the entire genre. It became a template for much that followed.

A concept album based on the writings of obscure right-wing author Ayn Rand and performed by three Canadians, one of whom – drummer Neil Peart – sported a silly moustache. Yep, a recipe for… sheer prog-metal brilliance.

Not only was this the album that broke Rush to an wider audience, but such was the bravura, technique and self-assured perspective that 2112 remains almost untouchable as the pinnacle of conceptual metal. Some misinterpreted it as proof that Rush held staunch right-wing opinions, but metalheads understood: 2112 was artistry turned up to 11.

Wizards, rainbows, mystical women. They were all here on the album that put Rainbow firmly on the map. Ritchie Blackmore’s guitar histrionics found an ideal soulmate in singer Ronnie James Dio, a man at home in a medieval world of cabbages and kings…

If Stargazer was the tour de force, then Tarot Woman, Starstuck and Run With The Wolf also struck telling blows for fantasy. Despite the pretensions of its lyricism and vaulting musical aspirations, it was delivered with such conviction and, yes, genius that no self-respecting metal fan would dare laugh. Even now.

By the end of the decade, metal was in dire need of a shot in the arm – and it got just that from Van Halen. Eddie Van Halen re-invented guitar heroics with his two-handed tapping technique for a new generation of wannabes. David Lee Roth brought humour and showmanship, and every track on their debut was a masterpiece.

Van Halen won their right to spearhead a new era in metal with an album that was like nothing anyone had heard before. Kiss may have been the self-proclaimed ‘hottest band in the world’, but in 1978 these guys were the coolest bunch on the planet.

Completely re-invigorating their sound and style, Germany’s greatest ever metal band found their niche with this remarkable record. You could almost smell the testosterone as they raced through the gears with macho acuity on Another Piece Of Meat, Loving You Sunday Morning and Can’t Get Enough.

Motörhead were the asymmetric cousins of Hawkwind – only dirtier, nastier and more rock’n’roll that Lemmy’s former employers. Overkill convinced a slightly sceptical metal audience that this trio were essential.

Far removed from the more mannered, uniform adversity of so many of their peers, Motörhead just cranked up the volume and let rip. It was high speed, in all senses of the term, and set up Lemmy, ‘Fast’ Eddie Clarke and ‘Philthy Animal’ Taylor as icons for the iconoclasts. No Class, Damage Case, Metropolis, the immortal title track – masterworks all.