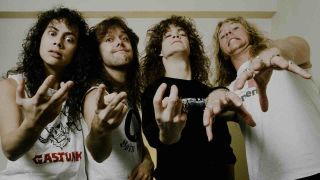 They might be stadium rock superstars now, but just like every other band Metallica started out playing cover versions in a garage. In recognition of the inspiration they’ve received from heroes and peers alike, the quartet have officially released almost 40 covers and, somewhat ridiculously, have even won Grammys for two of them – their takes on Queen’s Stone Cold Crazy and Thin Lizzy’s Whiskey In The Jar. Neither song, however, makes it into our list of the band’s 10 best covers…

8. When A Blind Man Cries (Originally recorded by Deep Purple)

Metallica’s contribution to the 2012 Classic Rock magazine-curated Re-Machined: A Tribute To Deep Purple’s Machine Head collection was originally the B-side of Deep Purple’s 1972 single Never Before. Having first seen the British rock legends in concert at the age of 9, Lars Ulrich inducted the band into the Rock and Roll Hall Of Fame earlier this year, and Metallica’s sensitive treatment of this deep cut is equally respectful.

Nowhere is Metallica’s debt to the NWOBHM more explicit than here, their take on the hard-riffing B-side of Blitzkrieg’s 1981 single Buried Alive. Recorded for the B-side of the Creeping Death single, the Leicester band’s titular anthem was actually the first cover song Metallica played in front of a paying audience, at their debut show in Anaheim, on March 14, 1982 [The Hetfield/Ulrich original Hit The Lights, appropriately, was the world’s introduction to the then LA-based band]

When Lars Ulrich first heard Bob Seger’s Turn The Page (originally featured on the Michigan singer-songwriter’s Back In ’72 album) while driving across San Francisco’s Golden Gate Bridge he heard “James [Hetfield] all over it.” Recorded for the Garage Inc, album in autumn 1998, Hetfield duly instils a sense of quiet nobility into Seger’s meditative lyric about life on the road for a touring musician.

The song that introduced Jason Newsted to Metallica fans, the opening cut on The $5.98 E.P.: Garage Days Re-Revisited, was one of four Diamond Head songs from Lightning To The Nations passed off as Metallica originals at the band’s first ever show. “We got the whole thing about riffs and structuring, the adventure and liberties from them,” admitted Lars Ulrich, acknowledging that “50 per cent” of Metallica’s original blueprint was lifted from the Stourbridge quartet.

What. A. Riff. Having previously tackled Budgie’s Crash Course In Brain Surgery on The $5.98 E.P.: Garage Days Re-Revisited, Metallica revisited the cult Welsh proto-metallers’ catalogue when settling into LA’s One On One studio for the recording of the …And Justice For All album. Released on the B-side of the Harvester Of Sorrow single, this thundering anti-money screed (originally recorded on 1973’s Never Turn Your Back On A Friend album) remains a live Metallica staple.

‘I’ve got something to say. I killed your baby today.’ Opening lines don’t come much more memorable than that. Cliff Burton introduced James Hetfield to New Jersey horror-punks Misfits, and Hetfield discovered Last Caress on the band’s 1980 EP Beware. “They were smashing guitars and singing about some horrible stuff – in pop songs,” the singer noted admiringly.

2. So What (Originally recorded by the Anti-Nowhere League)

The moment where Metallica abandoned their agreed plan to play King Nothing live on the 1996 MTV Europe Music Awards and smashed through Last Caress and the gleefully obscene So What for a gobsmacked audience instead is pure TV gold. The sheer relish with which James Hetfield delivers lyrics about bestiality, STDs, drugs and schoolgirl sex here makes So What the filthiest of guilty pleasures.

1. Am I Evil? (Originally recorded by Diamond Head)

Once upon a time Lars Ulrich slept on Diamond Head guitarist Brian Tatler’s bedroom floor: royalties from Metallica’s four recorded Diamond Head covers have since bought Tatler a new house. Released (alongside Blitzkrieg) on the B-side of the Creeping Death 12 inch single, the labyrinthine Am I Evil? offered a template for Metallica’s own multi-part epics, and having performed the song no fewer than 741 times, the San Franciscan band probably have squatter’s rights on it at this point.