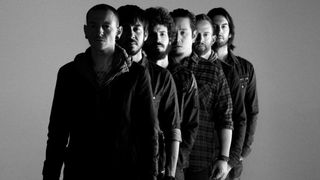 No band has sold more records this millennium than Linkin Park. Initially dismissed by metal’s self-appointed defenders of the faith as merely a ‘boy band with guitars’, the Los Angeles sextet have matured into one of modern rock’s most influential bands, transcending their nu-metal roots to create a body of forward-facing work that continues to inform the generation of bands that followed in their wake. “We always treat every album like it’s our first, because we don’t want to survive off nostalgia,” said Chester Bennington earlier this year: here’s the songs that have given the band that platform to build upon…

“We’re not 18-year-old kids making a loud record, we’re 37-year-old adults making a loud record,” Mike Shinoda declared before Linkin Park released The Hunting Party in 2014, and the album’s first single is a testament both to the band’s self-assurance and a renewed sense of feistiness. It’s a full 90 seconds before the vocals begin – the sextet building tension and drama with portentous piano chords and martial beats – and the opening lyric ‘Tell us all again what you think we should be’ is both a defiant anti-authoritarian challenge and a neat, sarcastic kiss-off to those who think they know Linkin Park better than the band themselves. The chorus, naturally, is a monster, and when old school hip-hop hero Rakim steps in to spit his bars the track catches fire anew.

9. Shadow of the Day

Having sold almost 50 million copies of their first two albums worldwide, Linkin Park were in an understandably bullish mood when they commenced work on Minutes To Midnight, determined to step away from the tried and trusted musical formulas that had served them so well on Hybrid Theory and Meteora. Unrecognisable as ‘nu-metal’, the slow-burning Shadow of The Day is most reminiscent of mid-period U2, not least with the echoes of With Or Without You in its chorus, and stands as one of the tracks which ensured LP’s longevity and set the band up for their second decade.

Originally conceived as an instrumental track by Mike Shinoda, Breaking The Habit is a key track in Linkin Park’s evolution, dispensing with both Shinoda’s rapped vocals and the distorted guitar riffs which had previously been integral to the band’s sound: it’s a measure of Shinoda’s lack of ego that he entrusted the song to his co-vocalist to sing even though the lyrics were his alone. Chester Bennington once identified Breaking The Habit as his favourite Linkin Park song, admitting that when he first read the lyrics he felt that Shinoda was “singing my life.”

One of Linkin Park’s few non-album singles, New Divide was written for the soundtrack to the second Transformers movie, 2009’s Transformers: Revenge of the Fallen. “We knew the movie was going to be epic, so we wanted to make an epic-sounding song,” said Chester Bennington at the time, but he was being generous, for LP’s theme is easily the best thing about the movie, Megan Fox’s denim shorts notwithstanding. It’s a textbook, precision-tooled Linkin Park track, to the point of parody, but that chorus is undeniable.

Woah! He said ‘Fuck!’ That was most people’s first reaction upon hearing the heaviest track on the Minutes To Midnight album, with the LA band abandoned their long-standing ‘no swearing’ policy to let Chester B have a good old rant in the chorus. Cleverly introduced by hand claps, pretty much guaranteeing the song’s status as a future live favourite, Given Up is a pure rager, with Bennington turning in a truly fantastic vocal performance, not least on the epic throat-shredding scream he emits mid-song.

Once again, Bennington kills it here, both in the track’s massive chorus, and in its apoplectic paint-stripping ‘You’re going to listen to me, like it or not’ middle eight. The second single from the band’s second album, Faint adheres pretty tightly to the ‘trademark’ Linkin Park sound (synth stabs-hulking riff-rap verse-skyscraper chorus) but was given a solid makeover on Collision Course, the band’s massively successful mash-up EP with Jay-Z, the recording of which saw the Jigga Man compliment fan-boy Mike Shinoda by stating “That shit is fast as shit! I might have to bring out the young Jay-Z!”

“Even to this day I feel like Papercut is probably the best representation of this band,” Chester Bennington admitted to this writer earlier this year, and it’s easy to understand what the singer means. This is the sound most people have in their heads when they hear the words ‘Linkin Park’, yet for all that Hybrid Theory has now become part of the rock’s cultural wallpaper, the album’s third single still sounds fresh and bold, largely thanks to the magnetic interplay between co-vocalists Bennington and Shinoda.

That Hybrid Theory is the best-selling debut album of the 21st century, having shifted a phenomenal 28 million copies globally, is perhaps down to this one song more than any other. Again, with no disrespect to the band’s creative director Shinoda, this is another stunning showcase for his buddy Chester, who absolutely slays the chorus and rips his heart out of chest on the song’s middle eight. Kept from topping the US Billboard chart by a frankly rubbish J. Lo/Ja Rule collaboration, In The End has sold over 2.5 million copies on its own in the States alone: tidy.

For all the high-tech production lavished on Linkin Park’s studio recordings, many of their finest songs would still hold up beautifully rendered in an ‘unplugged’ format. A case in point: last year someone posted Chester Bennington’s isolated acapella vocals from Numb online , and it sounded even more powerful stripped off all its meticulously layered instrumentation. In the earliest years of this century, there were plenty who questioned Linkin Park’s staying power, and insisted the LA band would disappear after the ‘fluke’ success of Hybrid Theory: Numb dispelled all that talk in just a blush over three minutes.

There’s an old truism that states that you never get a second chance to make a first impression, and what an introduction this was. Nu-metal was already firmly established as rock’s dominant trend when the first single from Hybrid Theory was released, but instantly Linkin Park here cockily announced that they were out to take over the world. With a chorus born of Bennington’s white knuckle frustration with producer Don Gilmore, there’ll always be a strong whiff of adolescent angst to LP’s definitive anthem, but you might level the same accusation at any number of classic songs, and regardless of how evolved and sophisticated Linkin Park’s songwriting might become, they – and indeed any other rock band currently drawing breath – will do well to ever equal the sheer visceral whomp of this debut.