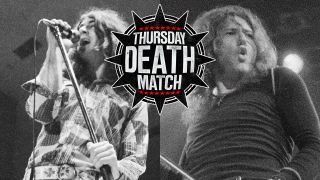 Deep Purple Mk II knew how to rock, perhaps like no other band before or since. Then Ian Gillan and Roger Glover departed, and Deep Purple Mk III introduced David Coverdale, Glenn Hughes, and a bucketload of soul. Which band was better? Geoff Barton comes out of the corner swinging for the former…

Today’s Death Match is so hopelessly mismatched, it’s the equivalent of Floyd Mayweather taking to the ring for a boxing rout with Pee-wee Herman. One flick of Floyd’s little pinkie and that would be it – poor ol’ Pee-wee splayed out gormlessly on the canvas, nose-broken and comatose, game over.

Even in the category marked ‘implosion’ Deep Purple Mk II win handsomely. Look, how many times did the Mk III line-up implode? Answer: just the once, in 1975, after the ill-judged, so-called “shoeshine music” of the Stormbringer album. Whereas Mk II imploded in 1973 after Who Do We Think We Are, in 1989 after The House Of Blue Light, and in 1993 after The Cattle Grazes On. Hell, we’re 3-1 up already!

The only blot on Mk II’s copybook I can recognise is Concerto For Group And Orchestra, keysman Jon Lord’s bloated classical pipedream which heralded the arrival of frontman Ian Gillan and bassist Roger Glover in 1969. After that somewhat misguided exercise in pretension the band saw sense, recorded In Rock, singlehandedly invented the heavy rock genre and embarked on a mission to make everything louder than everything else. Shit, they remarkably reached No.2 in the UK singles chart with Black Night, a song that wasn’t even on the In Rock album. They were kept off the top spot by Freda Payne’s Band Of Gold – but that didn’t matter because, cue drum roll, Purple were about to become a Band Of Platinum (as in record sales). They even scored a second chart single with Strange Kind Of Woman. How many hits did Mk III have? A big fat zero.

After In Rock, Mk II recorded the magnificent Fireball and the peerless Machine Head – three cast-iron classic albums released in a breathless two-year period (1970-1972). An awe-inspiring level of creativity and brilliance, I think you’ll agree.

Oh, how the world laughed when Purple replaced the estimable Ian Gillan with a singing salesman from Redcar in June 1973. Now of course David Coverdale (the aforementioned Teesside-based vendor of loon pants to the gentry) went on to prove his mettle magnificently, that goes without saying. But always lurking in the shadows was Purple’s shrill-voiced replacement for Glover: Glenn Hughes. Mk III would have been so much better with more of Cov’s roaring-like-a-rhino-isms, and less of Hughes’ ego-fuelled, crack-brained squeaking, wouldn’t you agree?

Then Hughes took it upon himself to exert an unseemly degree of influence on the aforementioned Stormbringer. Blackmore’s attention was wavering, so Glenneth came up with You Can’t Do It Right (With The One You Love), Ritchie suddenly started playing like Nile Rodgers, and Jon Lord turned into Stevie Wonder. Please make it stop! Or as Ian Gillan might say: “Sometimes I feel like screaming.”

The bongos were also sadly missed. When Mk II went off into one of their epic flights of musical fancy, Ian Gillan often found himself twiddling his thumbs backstage with nothing to do. Blackmore and Lord were sparring away merrily, Ian Paice was doing his groovin’ Buddy Rich thing on the drums, and Glover was prowling the stage determinedly, cradling his bass like a World War Two rifle (in the manner of Corporal Jones on a foray to flush out Germans from a nearby haystack).

There was only one solution: bring on to the stage an Afro-Cuban percussion instrument or several. And truthfully, the sight of Gillan in full-on bongo fury – all sweat, gurning and greasy, flailing hair – was something to behold. Can you imagine Coverdale blatting away on the bongos? “No, darling, that is not one’s bag at all.”

It should also be noted that Cov’s own stage gimmick – an L-shaped microphone stand, as seen at the California Jam – was extremely short-lived. Mic-stand-twirling proved to be unwieldy and impractical; he might as well have been using a rotary washing line.

As mentioned before, Purple Mk II reconvened on two occasions, to varying degrees of success. But Mk III couldn’t even manage that. Coverdale recently said of an aborted reunion: “After several discussions with Ritchie’s manager I felt I didn’t share their vision of the project. I sincerely wished them well and respectfully withdrew.”

Pshaw! Gillan and Blackmore didn’t see eye-to-eye either, but at least they gave it a go (make that two goes). Of course, when Gillan was drafted in to replace Joe Lynn Turner for one final throw of the dice, and then Blackmore succumbed to the lure of filthy lucre and jumped ship to re-form Rainbow, it was Purple’s darkest hour. A complete and utter disaster of unedifying proportions. But isn’t that what we all secretly like about the Mk II line-up? That beneath the music lurked tensions, tantrums and traumas aplenty? And that ‘triple-T factor’, in turn, lit the blue touchpaper and – like a skin-blistering, flame-on backdraft – drove Purple’s music to unprecedented heights of conflagration.

I do not wish to denigrate DP Mk III unduly. I Iove the Burn album like a brother – but this Death Match was over before it began.

As for Pee-wee Herman, the prognosis isn’t good.

..**.and Dave Ling comes out brawling for the Mk III line-up. Ready to throw in the towel? Not a chance. **

“Shoeshine music” – that’s what Blackmore famously called it whilst heading disdainfully for the door upon completion of Deep Purple’s 1974 album, Stormbringer, bringing the band’s Mk III line-up came to an ignominious end as he did so.

With just two albums to their name, the line-up comprising The Man In Black, plus frontman David Coverdale, bassist/vocalist Glenn Hughes, keyboard player Jon Lord and drummer Ian Paice burned brightly and for a short space of time – less than 18 months.

Of course, Purple’s preceding incarnation, featuring Ian Gillan on vocals and Roger Glover as bassist, was also remarkable in its own right. From the call and response displayed by Gillan and guitarist Blackers on Strange Kind Of Woman to the sprawling, incendiary, unpredictability of Space Truckin’ and via more immediate and succinct moments such as Black Night, Fireball and Pictures Of Home, it had seemed that all bases were well and truly covered. But what Burn and especially Stormbringer taught us was that Purple Mk II didn’t have a clue about passion and soul.

41 years on, Burn remains a truly incredible record. Heralded by a breathtaking, hard rocking title cut that was the match of anything Purple had recorded before, it had moments of familiarity but also introduced untold new strengths. With a grittier set of pipes than Gillan, Coverdale roared out his heart on the epic Mistreated, while the likes of Might Just Take Your Life, You Fool No One and Lay Down, Stay Down were driven by a different kind of groove.

But behind the scenes, Blackmore was contemptuous of the group’s ever-growing obsession with funk and soul. Stormbringer would be a bridge too far.

Back in 1999, Hughes told this writer: “Purple were hugely successful but they were so unhappy, so I saw this as a green light for me – this new, younger, long-haired cat who was so full of himself – to come in and take over… just a little bit!”

Stormbringer, my own all-time favourite album by the band, crackles with tension. As an established name (at least comparatively so), ex-Trapeze man Hughes admits that he had fancied the job of lead singer for himself. So far the decision to overlook Paul Rodgers and go for an unknown had paid off. On Burn, Coverdale, who in pre-Purps days had served customers in a boutique in Redcar and by night worked the North East’s cabaret circuit with a group called the Fabuloso Brothers, had performed as though his very life depended upon it. With Stormbringer, which saw the bass player take the mic alone for Holy Man, their rivalry escalated by several notches (“the pressure wasn’t on me, it was on David” added Hughes in that same conversation back in ’99).

Given Blackmore’s fouler-than-usual mood, it’s astonishing that band could pull so deeply from within to create a masterpiece of Stormbringer’s calibre. Hughes still remembers asking the temperamental figure to play some slide guitar on Holy Man, the song that he delivered solo. “Ritchie just looked at me strangely, used a screwdriver to play the part and left the room. I knew he’d never come back.”

It’s incredible, then, that Blackmore’s contribution is possessed of such swing and vibe. Sure, he rocks out as usual on the album’s masterful title track and Lady Double Dealer, but the super-funky You Can’t Do It Right (With The One You Love) and Gypsy were unlike anything the group had attempted before. And you can hear the emotion brimming over as Coverdale delivers its swansong of Soldier Of Fortune all alone.

If Blackmore’s heart wasn’t in these songs then he still managed to make a mockery of the versions cut by two guitarists on Whitesnake’s new album of re-recordings, The Purple Album.

Fast forward to the present and three members of Mk II (Gillan, Glover and Paice) remain firmly in charge of Purple’s legacy. They’re making creditable new music and playing shows that vary in quality – largely due to the effect of the years upon Ian’s voice. And yet… respect is due. Nobody’s getting any younger, eh?

However, hand me the keys to a time machine and there’s no question which part of Deep Purple’s history I’d revisit. Set the controls for 1974: it’s gotta be Mk III all the way.