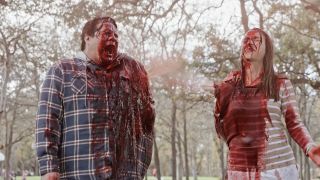 Do you know what we love? Over the top gore and blood splatters. We also love heavy metal and a bit of occutlism, so the short movie Death Metal was always going to be right up our darkened alley.

Described by filmmaker Chris McInroy as "a practical effects driven horror comedy about a metalhead who inherits a Satanic guitar that riffs to shreds," we knew we had to give Death Metal a watch... and it's the most claret we've seen spilled in five minutes since the last time Watain came to town.

A busking metalhead struggling to make any money gets his hands a Satanic guitar, but before listening to the rules laid down by Beelzebub himself, he's run off to the park to try and win over passers by. Bad move. In a matter of seconds the guitar turns on him and anyone nearby – even the children!

It's totally NSFW and probably shouldn't be watched if you're eating.