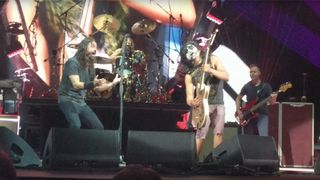 Sometimes dreams do come true. If you don't believe us, just ask Yayo Sanchez (now known to the internet and Dave Grohl as Kiss Guy) who joined Foo Fighters onstage at a recent show in Texas to play Monkey Wrench, after being plucked out of the crowd.

And he absolutely kills it.

While Dave at first seems hesitant, Yayo blows all reservations away in an instant as he runs around stage, shredding his way through Monkey Wrench with precision and flair like Slash on his best day – even causing Grohl to forget the words at one point.

Louder Editor In Chief Scott Rowley was in a band with Sanchez for a week back in 2007 – back when Yayo was just 14 and in London for Rock’N’Roll Fantasy Camp.

“At Fantasy Camp, they through you in at the deep end,” says Rowley. “The very first thing we had to do – minutes after meeting each other – was play Kiss’s Rock And Roll All Nite, without any rehearsal. Yayo sang and played guitar. It was amazing. And our coach was Bruce Kulick – formerly of Kiss. So he’s got proper Kiss Guy credentials, but there’s more to him than that – he was a force of nature even then, totally born to do this.

“He’s a great songwriter too: we had to come up with an original song over four days to play at the end. Yayo wrote three songs – each one better than the last. If you ask me, Foo Fighters could learn a thing or two from him.”

Here's Yayo before the show, looking less sweaty but still very much a Kiss badass.