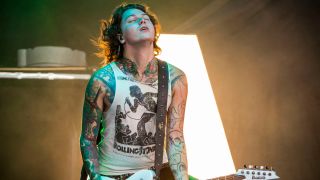 Following a summer on the US Mayhem tour, Asking Alexandria are finally heading back to Blighty. We caught up with guitarist Ben Bruce to get his thoughts on AA's imminent return and the prospect of a new record...

Your UK tour kicks off next week in Norwich: are you ready for this?

“Absolutely. We spent the summer on the Mayhem tour in America, and those were huge shows, 20,000 people a night, so the UK tour is going to be much more intimate and we can get closer to the fans and they won’t be standing a mile away from the stage so to be honest I think it’s going to be a lot more fun.”

Was Mayhem a good tour for you guys?

“Oh, it was incredible. We were on the main stage, which just had four bands – Avenged Sevenfold, Korn, us and Trivium – and we’ve been friends with all those guys for a long time, so it was a lot of fun. There were a lot of people there every day and so it was a great opportunity for us to make new fans and just spend the summer drinking and having a laugh with our mates.”

You’ll have The Ghost Inside, Crown The Empire and Secrets out with you in the UK: were those bands that you hand-picked?

“We hand-picked The Ghost Inside a long time ago because they’re very, very good friends of ours, we’ve known them for about six years, before their band began in fact, because we knew them from other bands. When you’re away from home and away from your family it’s nice to be able to choose a band to tour with that you’re good friends with, it makes the whole thing a little bit easier, so yeah, we chose The Ghost Inside for that reason. Crown The Empire we’ve toured with a few times before and we knew we’d get on with them too, but if I’m completely honest I’d never heard of Secrets before this tour. Our booking agent suggested them and they seem like nice guys, so maybe our fans will discover their new second favourite band.”

When we spoke to you in April you mentioned that you were having your producer Joey Sturgis come out to Mayhem to record some new songs: did that pan out as planned?

“Er, no. He didn’t come out in the end, he was supposed to, but he bailed on us at the last minute, which was quite annoying. So we had another guy come out and we ended up writing about 14 tracks for the new record. It actually worked out really well. We’re going into the studio in January/February, and looking at a July release I believe.”

You mentioned before that your new songs were so heavy that your label was a little concerned: have you mellowed out at all on the newer songs?

“Actually, the rest of the songs we’ve written are nowhere near as heavy as that first batch: we must have been really pissed off when we wrote those! We’re not even sure that those songs will make the record, so I’m trying to persuade our label to put them on iTunes for our fans to download for free. But of course them being a record label they’re like ‘No, we don’t like to give things away for free’, so I’m in a fight about that at the moment!”

What are you most looking forward to about getting back out in front of your UK fans again?

“Honestly, for us, there’s nowhere like the UK. Obviously we have a good time everywhere we go in the world, and the shows are always great, but for some reason there’s just that extra buzz and extra excitement when we’re back home. I don’t know if it’s just us or if the fans seem more excited, but as we spend so much time in America, coming home is a real treat.”