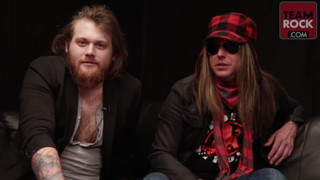 We Are Harlot frontman Danny Worsnop and guitarist Jeff George sat down with TeamRock and reflected on the band’s origins and the themes that informed their self-titled release.

“The overlying theme of the album is about doing it,” says an unusually bashful Worsnop. “It’s about sex.”

“The things that you’re doing at the time [of recording] will usually translate into the record,” adds George, helpfully.

There was us thinking Dirty Little Thing was about an oily engine part. We feel grubby now. Find out about all that and more by watching the video below.

We Are Harlot’s self-titled debut is out now through Roadrunner.