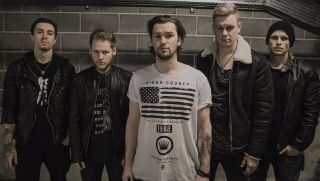 There aren't many bands who can say they’ve toured and recorded songs with their heroes before the release of their first album. That said, The Fallen State are not most bands.

Formed in Devon in 2013, from the start the band decided to “release music smaller, and more often,” says drummer Rich Walker. “If you throw an album out from day one there’s the potential for people to forget you. You can probably look at a year for a tour cycle for one album, so that’s a long time before you can put new music out”.

Five EPs later, it appears to be paying off. Nova, the first single from their latest EP The View From Ruin, caught the attention of Chris Robertson, lead singer of Black Stone Cherry, who The Fallen State toured with in 2015.

“We released Nova in February 2017, and after its release Chris reached out to us saying how much he liked the song,” says rhythm guitarist Dan Oke. “A few months later we decided to invite him  to play on the track and he was really happy to do so.” Not only did Robertson lend his signature bluesy guitar flair to the verses, and harmonies to Nova’s anthemic chorus, he also re-recorded the second verse.

The View From Ruin is The Fallen State’s fifth EP, and it’s likely to be their last for a while. Summer 2018 will see them finally head into the studio to record their debut album. It’s been a long time coming because of their busy touring schedule - they’ve been on the road with Halestorm, The Treatment, Heaven’s Basement, Black Stone Cherry and more recently 3 Doors Down - but also because it’s only recently that they’ve felt ready to record an album.

“I don’t think we could have written an album before now. We didn’t know what our sound was; we just wrote songs here and there, put together and launched an EP. Now we feel like we’re ready to do it,” says lead singer Ben Stenning.

So did they have a sound or style they were aiming for with the album?

“No,” laughs Stenning. “We wrote the first song and it was really different to what we’d written before. It was a totally different style that was a bit more progressive, and then we just went song by song. Because the process hasn’t been interrupted with gigs here and there, but three months of solid writing, it’s flowed out naturally and the songs fit together really well.”

“You’ve got more room to say what you want to say on an album, that’s what we’re learning,” adds Walker. “There’s room to tell a story, as opposed to trying to put everything in one song as a single.”

“We used to think ‘let’s write a pop song’, or ‘let’s write a fucking heavy head-banging song’, whereas now we think, ‘‘what do we want to say in this song and how are we going to do that?’” says Stenning.

Hopefully, it won’t be long before we find out. The Fallen State start recording this summer, after one more tour. From 28th June - 5th July they will be supporting US rockers Tremonti on their upcoming UK dates.

“We are all really excited for the Tremonti tour,” says Oke, “but myself in particular, as Mark Tremonti has been a huge influence on how and why I play guitar today. We can’t wait to get on the road with them.”

Tickets are available now for Tremonti supported by The Fallen State from Ticketmaster.