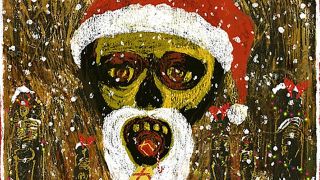 Christmas cards are pretty rubbish, aren’t they? Oh look it’s a robin! Oh look it’s a snowman! Oh look it’s a hilarious quip about Santa being late or eating too much or getting lost HAHAHAHAHAHA. What these festive greetings really need is a hefty dose of heavy metal and that’s what artist Dominic Sohor has done.

“A couple of years ago I was listening to Reign In Blood in the lead-up to Christmas and had the phrase ‘Reindeer Blood’ pop into my head which gave me the idea for the first parody card,” Dominic tells Hammer. “I thought juxtaposing Slayer, the archetypal ‘evil’ band with something wholesome like Christmas would be amusing. So, I drew it up, posted it online and it got a great reaction.”

“I then followed this up with the Season’s Greetings In The Abyss card last year and this year’s Elf Awaits which I hope is similarly well received. I hope Father Christmas doesn’t get too annoyed with me and sends me a lump of coal this year.”

You can check out more of Dominic’s artwork on his official website and buy the cards here.