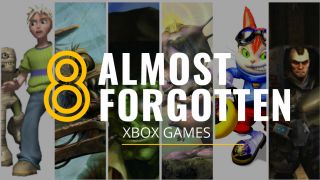 November 2001 marked an historic time in recent video game history. Microsoft released the Xbox, taking the console war to a whole new level. The Xbox wasn’t sleek nor pretty but, goddamn, was it powerful. The Xbox was the first console to kiss goodbye to memory cards and have a built-in hard disk for storage. It had an integrated Ethernet port, which allowed for online play, giving Microsoft an early foothold in what was to become the future of multiplayer gaming.

As well as boasting these incredible new features, the Xbox also had a host of exclusive games, developed specifically for the console. However, the sheer exclusivity of these games, combined with a console that didn’t do all that well commercially, led to a lot of awesome titles becoming obsolete. Allow us to take you back to the early noughties, and bring back some of the games that were almost lost to a short-lived, yet brilliant console…

Stubbs the Zombie in Rebel Without a Pulse

Without a doubt, one of my favourite games of all time. Stubbs the Zombie dropped in 2005 but was vastly overshadowed by the release of the Xbox 360 only a month later. Unlike other apocalyptic zombie games, Edward ‘Stubbs’ Stubblefield is the only zombie and he’s out to seek his revenge on a multi-billionaire industrialist.

The aim is to travel through an endearing, retro-futuristic recreation of 1950’s America, eating the brains of other humans, in order to create a zombie army. The tone of the game is humorous, and although the campaign is relatively short, it’s incredibly entertaining. As well as eating brains, Stubbs can beat other characters to death, summon a zombie hoard to do the work for him, and even use his detached arm as a separate weapon, to gain control of humans. The campaign also had a two player co-op mode.

Stubbs the Zombie received pretty favourable reviews, but a combination of development problems, and a poorly timed release, meant that this game was destined to become a zombie itself. A port of the game was released for the Xbox 360, but was shortly recalled due to a number of tech problems.

Yes, there was a third Toejam & Earl game. Yes, it was pretty disappointing. But it happened, and weirdly, a lot of Toejam & Earl fans don’t know that. After the unforeseen demise of the Dreamcast, the franchises dependent on Sega had to find somewhere else to release their games.

Toejam, Earl and their new mate Latisha have to travel to Earth, to retrieve the twelve Sacred Albums of Funk, from the game’s antagonist – The Anti-Funk. Each level represents a part of the Earth’s ecosystem, all reasonably well structured and designed. The game itself looked nice and wasn’t terrible to play, but the cheesy ‘hip-hop’ cliché it pandered to had become obsolete by the time the game was released, leaving it to be torn apart by critics.

Mission To Earth did its very best to stay true to the whimsy and coolness of the first two Toejam & Earl games, but it desperately lacked finesse, leaving a once-treasured franchise in an arbitrary funk.

Here we go: a game that was actually a launch title for the Xbox. Munch’s Oddysee was originally intended to be a Playstation 2 release, but ended up coming out with the Xbox console in November 2001. Although it’s technically the third Oddworld game, it’s set AFTER Abe’s Oddysee, and before Abe’s Exodus, which… makes some sense, somewhere.

Anyway, Munch is a rare breed of creature in the Oddworld universe, and players switch between him and former protagonist Abe, as you progress throughout a lush, weird environment filled with puzzles and quests. The game is pretty fun if you’re a fan of Oddworld’s other offerings, but as a standalone game, it wasn’t all that epic. However, developer Lorne Lanning’s vision of destroying animal exploitation and profiteering capitalists is still captured perfectly in this instalment of the Oddworld Quintology. Munch’s Oddysee pales in comparison to Stranger’s Wrath, though.

Grabbed By the Ghoulies

An absolute gem from a developer well-known for their brash humour and platforming finesse. After being bought out of Nintendo to become part of Microsoft Games Studios, Rare released Grabbed By The Ghoulies as an Xbox exclusive, in 2003. Players assume the role of Cooper, a young lad assigned the task of rescuing his girlfriend from a mansion filled with monsters. Not that I cared about that in 2003 – I played it because it had a funny title.

Grabbed By The Ghoulies was simple in design but I remember it being pretty unforgiving. The game had regular time-trial missions, where if you didn’t kill every monster in the room, the Grim Reaper would chase the fuck out of you and cut out your soul if you didn’t escape. Pretty grim for a game rated 3+, but I expect nothing less from Rare. The game is now playable on the Xbox One, as part of the ‘Rare Replay’ collection. It’s a glorious, humorous beat ‘em up that’s well worth playing, if you’re into that.

In 2002, the Xbox was in dire need of a mascot. Sony had Crash Bandicoot, Sega had Sonic, and all Microsoft had was the silent, alien slaying maniac, Master Chief. Blinx was a cat, who had the power to manipulate time. His role throughout Blinx: The Time Sweeper is to iron out Time Glitches, before they manifest into Time Monsters. Blinx had a ‘Time vacuum’ which had a number of different controls he used to do a load of stuff.

Actually, the plot itself gets a bit fourth dimensional if you think too hard about it. Let’s just focus on the cute cat with the time hoover.

Blinx: The Time Sweeper was an enjoyable game. It had a lovely art-style and controlled well, but the inherently complicated nature of the ‘Time Mechanics’ in-game rendered it too hard for a lot of young players. This led to poor sales, and Blinx the cat never did become popular enough to assume the role of Xbox mascot, leaving Halo’s Master Chief to reluctantly scoop the title for himself. Blinx: The Time Sweeper became another game destined to be left outside in the cold, behind the cat-flap of unnecessarily complex time mechanics.

Oddworld’s latest and arguably greatest foray into video gaming, and another one of my all-time favourites. Stranger’s Wrath dropped in January 2005, again, only a few months before the release of the Xbox 360. Despite being set in the Oddworld universe, Stranger’s Wrath contained a new protagonist, plot, and a brand new Western styled environment. You assume the role of Stranger, a fairly beige yet enjoyable bounty hunter, on a quest to raise money for an ominous, life-saving operation.

The cool part about romping around with Stranger, was that although the story played out in a linear fashion, the game felt like an open-world RPG. You could pick which missions to do first, how you completed them, and your reward depended on how well you did it. Stranger’s Wrath also made you hunt for your own ammo, which were all Oddworld-styled insects and animals. My favourite weapon was the Fuzzle – a small, hairy ball of teeth that would gnaw to foes to death.

Stranger’s Wrath was lost to the exclusivity of the Xbox for many years, but you can now play the HD remaster on PC and the PS4, and I’d definitely recommend doing so. Oddworld took a risk abandoning their only popular protagonist and I reckon Stranger’s Wrath came out better than all of them!

Unreal Championship was essentially a console version of Unreal Tournament for the PC, but that doesn’t diminish it a single bit. Xbox was paving the way for online console gaming, and they needed a game that would entice players to take full advantage of Xbox Live. It was the Xbox’s answer to games like Quake and Doom, and while Halo provided a great multiplayer experience, something else was needed to lure PC players over to the console.

Championship had a single player campaign, which was reasonably fun but lacking in spectacle, because the game was primarily designed to be an online frag fest. It had a series of classic multiplayer game modes; deathmatch, capture the flag, and survival mode.

In theory, you could play any game in the Unreal series, and get the same experience from it. However, Unreal Championship brought a hefty amount of PC players to Xbox, and the Unreal engine’s seemingly unstoppable growth to become one of the world’s biggest game engines – powering AAA titles and indie games alike – arguably started with Unreal Championship.

Now, here’s a title that perfectly articulates the success of the Xbox. Brute Force was a squad-based third person shooter, where the player must control four different characters in order to combat a hostile alien race. The game dropped in May 2003, and there was a huge amount of hype surrounding it.

After the success of Halo, space-shooters were on the rise, and Brute Force caught a wave of attention so fierce, that it actually outsold Halo in its first week. Selling more copies than Xbox’s biggest title was a huge deal, but that success was short-lived after reviews of the game came flooding in. While the game itself was okay, and the reviews didn’t tear it to shreds, it was met with an air of mediocrity, and Brute Force’s popularity sank faster than it had risen.

The sad part is that Brute Force, as a standalone game, was pretty enjoyable. It (sort of) pioneered team-based strategy in a shooter, and it played well. However, under the shadow of an existing space shooter giant, it was destined to fail. No one is gonna care about the girl that kind of looks like Scarlett Johannson if you squint in the dark after 8 pints, while the real one is stood next to her. Brute Force and Halo were like that. The moral of Brute Force’s story? Don’t specifically aim to outsell the biggest dog on the platform. Or do it quietly, like Unreal Championship did.

So there you are: a list of games that no one had thought about for ten years. The Xbox was great and I’m glad (yet slightly afraid) that we’ve hit an internet era where games like this will never be forgotten about again…

The Rise and Fall of Sonic The Hedgehog