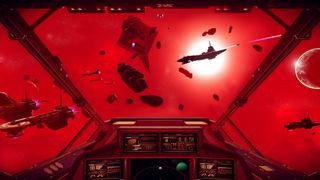 Space. The final frontier. These are the continuing voyages of video games. To seek out new frontiers, create new life and engage gamers in new adventures in the majesty of the universe.

Whether or not you think that’s a load of old bollocks space games have been around since the dawn of gaming. Space Invaders, Galaga and Defender opened up the whole universe developers and gamers a like to explore.

Arcade games aside, space games really began back in the mists of the early eighties. It was a magical time. Dungeons & Dragons was blossoming, thrash metal was killing it and two young game developers called David Braben and Ian Bell who created the now legendary open universe space exploration and trading game Elite.

Elite was pretty simple by today’s standards but it offered gamers a first proper chance to explore the galaxy and build a career in space as a trader, mercenary or a pirate. The galaxy was represented in simple 3D wireframe graphics but it was deeply involving and addictive. Players spent hours seeking out trade, looking for ships to rob or just mining some asteroids. It’s more fun than it sounds and you could listen to Anthrax or Slayer on tape while you were doing it.

As time moved on the nineties ushered in a golden age for space games. It opened with the first game in the awesome space opera series, Wing Commander, which pitted players in a brutal war against a humanoid cat race called the Kilrathi. Wing Commander was truly awesome. It had a way of getting under your skin like a particularly crushing riff. This was because the story changed depending on whether you were winning your missions or losing them. Screw up too much and you’d end up fighting a rear-guard action in the Scimitar, a bucket of bolts that was woefully out-matched by the Kilrathi fighters. Those missions rarely ended well.

Wing Commander wasn’t the only space game series in town during the nineties. LucasArts managed to top the Wing Commander series by bringing two Star Wars themed space combat games in the superb X-Wing and more-surprisingly, TIE Fighter. X-Wing was great but TIE Fighter was absolutely immense. Playing as a member of the Imperial Navy flying combat missions and crushing Rebel scum was a devious and exhilarating experience.

By the end of the nineties interest in space games had died off in favour of first-person shooters but 2000 came around bringing the noise with nu-metal and MMOs. While most nu-metal may now be a footnote in metal history, MMOs are still going strong and there is one space MMO that rules supreme above all others – EVE Online.

EVE took all of what made Elite so addictive and turned it into a massively multiplayer game. Elite plus more human players has made for an impressively popular and supremely entertaining formula. Its defining characteristic is a community that frequently engages epic space battles that would make any big budget movie look like a water-pistol duel. And it has a real-life space-pope!

EVE Online has valiantly carried the torch for space games for over a decade. It’s not alone now though. Elite co-creator David Braben has brought Elite back as an MMO called Elite Dangerous giving gamers a chance to explore the Elite universe again with one hell of a graphical update.

And then there’s No Man’s Sky. It breaks orbit this week with 18 quadrillion planets to explore, all generated by an algorithm creating unique experiences for every single player. Space is finally exciting again.

How 65daysofstatic Ended Up Creating No Man's Sky's Soundtrack