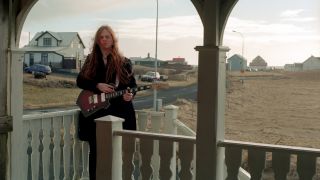 Icelandic whippersnappers The Vintage Caravan have made quite the stir with their psychedelic, bluesy classic rock sounds and their energetic, exuberant live performances. With their brand new album Arrival dropping this week via Nuclear Blast, we catch up with their frontman Óskar Logi to discuss recording in the wilderness, finally being old enough to buy beer and how his hair made him a movie star…

This is your first album recorded for Nuclear Blast. Did that pile on the pressure? “We try not to think too much about it and do it as naturally as possible: otherwise it’s like poison for the mind! We tried to please ourselves more than worry about what others will think. Our last albumVoyage was released in 2012, so we had almost three years to work on Arrival. We widened our spectrum a bit sound-wise. We went a bit heavier, a bit darker, more prog. I think we got a good balance, and I think the songwriting is more mature. We were listening to a lot of Rush!”

How did you find the recording process? “We actually set up a studio in an old ballroom in the countryside in Iceland and worked for two-and-a-half weeks straight. It was pretty intense; we were working from like 9am to 3am every day! It was the first time we had time to really think about the songs, and the performance. We wanted to capture the performance rather than just play the songs. Performing for us is the most important thing: we are a live band.”

**The artwork of Arrival is pretty trippy. Can you explain where it comes from?** “The artist’s name is David Paul Seymour, he’s an American artist. The art really complements the album. It’s kind of gloomy, with the dark colours; kind of weird, with dark elements, but very powerful. In Voyage the caravan was on a voyage; now it’s arrived on a planet – hence the name! The polar bears came from a conversation we once had about polar bears pulling a caravan through the desert, we thought that idea was pretty interesting! Must have come from too many, uh, hamburgers… ha ha ha.”

Recently you were in the Icelandic film Metalhead. How did you become involved with that? “I got a Facebook message one day saying that one of the biggest directors in Iceland wanted to meet up with me! I was surprised because I have no acting history at all, but I basically got the job because of my hair. He said, ‘Do you have a driving permit?’ ‘Yes.’ ‘Do you play guitar?’ ‘Yes.’ ‘Do you have long hair?’ ‘Yes.’ ‘You got it!’ It’s a pretty small role, but it’s important for what the movie is about. Also a lot of people have checked out the band because of the film!”

Ragnar Bragason on new movie Metalhead and his relationship with metal

Do you think that growing up in a place like Iceland has had an effect on you and your music? “Probably. We don’t really realise exactly how because we don’t have the comparison of growing up anywhere else. I think the beautiful landscape has an effect, especially lyrically. A lot of bands have an Icelandic sound too, like Solstafir. But the thing about the scene in Iceland is that you can’t make it in Iceland. So that makes the artist think, ‘Okay, well fuck it I’m gonna do whatever I wanna do!’ You’re not chasing what’s popular to make money because there isn’t any! So that’s probably the reason why a lot of Icelandic bands sound so unique.”

You recently got a new drummer, Stefán Ari Stefánsson. How is he fitting in? “He is probably one of the best metal drummers in Iceland, but he’s been really influenced by retro rock music so he’s definitely at home playing this kind of stuff. We were actually in a jam group together at one period; we were partying somewhere and decided to meet up and do some psychedelic jams and that went really well! So when Guðjón [Reynisson] left the band, I immediately went, I want Stefán! He’s really fitting in musically and gets on well with us.”

What are your plans for 2015? “We’re gonna relocate to Denmark again. We did that last year, and came back to Iceland to record the album and went back to our old jobs for a few months. In Denmark, our kitchen is like our rehearsal space. We have like 20 summer festivals this year! We live close to the border where beer is cheaper than water so we tend to get a shitload of beer! This year I finally became the legal age to drink beer in Iceland, and of course, I had never tasted beer before that…”

Arrival is out now via Nuclear Blast.