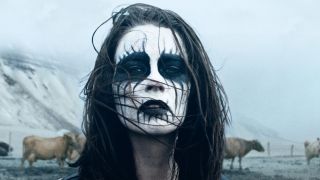 In front of snow-dusted mountains and a gloomy Icelandic sky, the piercing blue eyes of a young woman in corpse paint stare out defiantly, long hair blowing in the wind. It’s a sight that’s rarely seen in popular culture, except as an icky caricature – until now. It’s about time, too.

This striking image can be seen on the poster for Metalhead, the latest film from acclaimed Icelandic director Ragnar Bragason. The film tells the story of a young woman, Hera, still reeling from the loss of her metal-loving older brother Baldur in a horrific accident when she was little. She deals with her grief by drowning it out with heavy sounds, starting with the likes of Priest and Megadeth before delving into the darker world of black metal. The film takes place against a desaturated, blue-hued backdrop of barren, rural Iceland, almost like the visual equivalent of black metal itself: cold, sparse, and frosty, and perfect for amplifying Hera’s sense of isolation.

Metalhead is first and foremost an emotionally-charged, devastating and beautiful depiction of a family’s loss. But it’s also the film that metal fans have been waiting for – one with a nuanced, sensitive portrayal of a young metalhead, not a cartoonish stereotype. Perhaps even more significantly, the film’s protagonist is a girl, and she’s not remotely interested in boning the boys in the band, but rather in picking up a guitar and starting one on her own. For any female metal fan who’s ever been asked where her boyfriend is at a gig or had her integrity scrutinised, this is pretty ground-breaking.

When we sit down to talk to Ragnar, we suggest that, whether he meant to or not, he has made a film that’s quietly a little bit feminist. Why make this Hera’s story, when it could just as easily have been about Baldur?

“Actually, I didn’t put much thought into it,” he admits. “What happened is that I just got this image in my head – I don’t know where it came from – of a girl with a guitar, surrounded by cows.”

We see this image brought to life in one of the film’s more darkly comic scenes in which Hera, who lives on her parents’ farm, is out in the cowshed recording her own demo, Svarthamar (composed by Pétur Ben for the film’s gorgeous soundtrack, which can be heard below). As she turns up the amp and strikes the first chord on her guitar, the cows scatter in all directions (the goats probably love it, though).

“I think a girl with a guitar is a very powerful image,” says Ragnar. “And my favourite musicians are people like PJ Harvey, so for me, a girl with a guitar is really cool. Growing up, I was always fascinated when I met girls who were into metal, because it has these macho connotations, it has that energy about it. But it would have been a much more typical film if it had been a guy, and not that special,” he adds.

“I had that image for a few years, and then by coincidence I was doing a workshop at the Academy of the Arts here in Reykjavik, in the acting department. I just happened to meet this girl, Thorbjörg Helga, (the actress who plays Hera) and instantly thought, maybe she’s that girl, you know? She has that attitude.”

She certainly does. Thorbjörg’s performance as Hera isn’t over-the-top, like that of a petulant child acting out. She carries herself with the faux-punk swagger of a troubled young girl putting on a brave face, trying to hide her vulnerability as she makes mistake after mistake on her journey. As Hera throws on her brother’s old leather and starts to indulge in an increasingly chaotic rock ‘n’ roll rebellion that’s both sad and satisfying to watch, the neighbours start to raise their eyebrows. Why is a pretty young girl like Hera listening to the Devil’s music (when she should be settling down and getting married, is the implication)?

We put it to the director that the beautiful thing about Metalhead is that the answer it provides to this question applies not just to women, but to everyone who loves metal: because it moves her. Metal speaks to the grief and anger and overwhelming feelings inside her, as it does to many of us.

“It’s about emotions,” Ragnar agrees. “Music is the catalyst in the story; she uses it to get over her grief. It’s not just about the coolness of the music, but the emotional impact that it has.”

Of course, that’s not to say that all metal fans must have a similarly tragic story to Hera to appreciate this kind of music. But as Hera’s story progresses and she begins to move on with her life, her attempt to turn her back on metal music is unsuccessful, as she realises it’s a far bigger part of her than just a way to get over Baldur’s death.

Without giving too much away, there’s a point in the film at which Hera is suddenly faced with a choice between her love of metal and a ‘normal’ lifestyle. For Hera it has the potential to be life-changing, but it’s also a moment that’s bound to resonate with all of us who, at some point, have also been forced to make that choice even in the smallest ways, like the guys who tie their long hair back to go into the office or the girls who roll down their sleeves to cover up their ink. Did Ragnar ever face a similar situation in his life?

He considers this for a moment. “Yeah, actually I did, you know,” he says. “There was a point in the late ‘90s where I stopped listening to metal. I thought it was maybe a part of my youth, that it was juvenile or something. But I started listening again in the ‘00s and eventually came to terms with the fact that I am a metalhead, and always will be!” He states this proudly, with a hint of amusement at how silly this confession sounds.

“I think a lot of people go through that,” he continues, “like you said, the guy hiding his tattoos to go to work. But today it’s a lot more acceptable to be a metalhead than it was twenty years ago.”

Twenty years ago is about when the film takes place, as it references the Norwegian church burnings that occurred in the early ‘90s in a scene where Hera and her parents are watching the news – a moment lifted straight out of the director’s own memory of that time. How closely does Hera’s musical journey of discovery mirror Ragnar’s own?

“She’s my age, so the music she listens to is what I listen to,” he explains, although he admits he’s less into black metal than Hera is (“It’s a bit too lo-fi for my tastes”). “And actually when I started writing the script, I went through the history of metal. In an earlier version, she was born on the same day that Black Sabbath released their first album. I kind of wanted her story to be, in some way, the history of metal, but that disappeared as we moved along, you know.”

The inclusion of the church burnings might cause some metallers to roll their eyes, but in any history of metal, there’s no doubting their significance: “That was the first thing that anybody knew about black metal,” says Ragnar.

Today, the Icelandic metal scene boasts the likes of the wonderful Sólstafir, and the increasingly popular Eistnaflug festival. So what does the director think of the current scene compared to back then?

“In Iceland, we didn’t have a metal scene growing up,” he recalls, “and today we probably have about a hundred metal bands. But I think that the top two biggest selling albums last year were both metal. I’ve wanted to go to Eistnaflug for a while, maybe this is the year that I’ll finally get to go!

On the increased visibility and popularity of metal in his homeland, he muses: “I don’t think metal is necessarily more mainstream, but just that more people are ‘coming out of the closet’ now, you know?” He laughs. “They’re admitting they’re metalheads.”

Who knows? Maybe seeing a film like Metalhead will encourage more people to do the same.

Metalhead is available On Demand from 3rd April