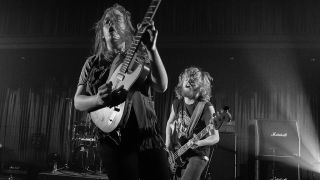 It comes as a shock to leave comparatively sunny England, only to emerge squinting from an aircraft in minus temperatures.

Hammer has arrived in Iceland, here to join a panel of judges gathered from across Europe to determine the victor of the Icelandic leg of the Wacken metal battle 2015. The victor will go on to represent their proud country in an international winner’s battle at the festival proper.

In the days before, we get to experience this rarefied environ, an experience akin to visiting another planet. Its beauty is matched only by its desolation, ice-encrusted planes torn asunder by rends in the earth emitting volcanic plumes, as streams of near-boiling water run innocuously by the roadside. Geysers emit their sulphurous spume, while the wind cuts through mountains with a blade of ice. It takes little imagination to realise why music of such unique soul emerges from such a place.

Located on the docks of capital Reykjavik, Harpa concert hall, the venue for the battle, is an angular glass edifice that reflects light in a dazzling array. It is an impressive sight, a shimmering icon of modernity in a city centre that otherwise feels quaint. The opulence continues inside, an air of dignified civility gleefully besmirched by the rabble of black-clad figures spilling out of the busy concert hall. The battle draws nigh.

First up, youthful bunch Röskun [4] provide a patchy melange of divergent styles with no unifying factor, accompanied with harmonised vocals that are out of key. Their one saving grace is their humble guitarist, unleashing a bellow that would make Scott Kelly proud. They would do well to move him front and centre.

Narthraal [6] have no such problems with identity. They’re an old school death metal band through and through, each member looking like they’d happily drag you kicking and screaming to mutilate you in an abandoned shack. Unfortunately their musical blade proves somewhat blunt, frequently procrastinating without ever providing a lethal finishing blow.

In The Company of Men [8] have been fed a diet of Dillinger Escape Plan and Sikth, shaken around a bit, and then unleashed to agitate. They’re the first to truly ignite the atmosphere, proving thrilling from start to last. You’ve seen their sort before, but their potential is undeniable, and they play like it matters.

Oni [6] have had a nightmare journey, dug out of a snowdrift by the police mere hours before show time. Consummate professionals, they pour everything into their slick brand of progressive stoner rock, but leave an odd impression with a frontman with the moves of Prince and the suit of an office worker.

Churchhouse Creepers [7] play a similar style of traditionally minded stoner rock, but with greater refinement. All signs point to a professional outfit, but they struggle to engage emotionally. Rock’n’roll needs to put one hand down your pants whilst holding a switchblade to your throat, and these guys just don’t feel that dangerous.

The main issue atmospheric black metallers Auðn [7] have is not their music, it’s their self-consciousness. It’s at odds with the primacy that defines the music they play. You cannot play black metal with timidity, and until they find a will of iron to impress remorselessly upon their audience, they have a problem.

With the combatants each having served their time in the arena, the judges, opinions suitably lubricated by too many beers, retreat to reach a verdict, while last year’s winners Ophidian I [8] tear Harpa a new one with their clinically devastating death metal, a professional outfit that go some way to showing the level of skill required to survive at Wacken.

The judges return, taking the stage to announce the winner. In the Company of Men emerge deservedly victorious for an incendiary performance. They will soon play an encore, but not before headliners The Vintage Caravan [10] prove nothing less than a revelation. They remind you of what rock music is supposed to be about: jaw-dropping musicianship coupled with edge-of-your seat tension, playing as if their lives depended upon it. Are they too young to play the blues? Here’s hoping their lives are tough and their hearts are crushed. If they poured every bit of that pain into their music they’d blow our minds.

In the Company Of Men close the night with enthusiastic aplomb, leaving Hammer to celebrate with newfound friends. Shortly, we will get on a plane without having slept, arriving back in blighty with too many layers of clothing on and without the power of speech. It is a privilege to have visited such a magical land, and we wish the winners the best of luck, for the true battle lies ahead. If they carry with them some of what makes their homeland so special, it will serve them well.