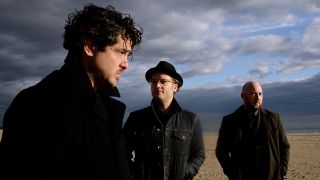 Formed in the aftermath of 9⁄11 as Pela, the band that would become Augustines met through mutual friends busking on the New York subway.

But when Pela fizzled out, founder members Billy McCarthy (vocals/guitar) and multi-instrumentalist Eric Sanderson completed the music they’d started – tapping into their love of travel and foreign culture to add flavour to their unashamedly emotional, anthemic take on indie rock. Augustines’ new album This Is Your Life finds them snapping at the heels of prime-era U2.

Augustines’ first album, 2011’s Rise Ye Sunken Ships, was written following a tragedy [Billy’s brother killed himself shortly before it was made]. What inspired the lyrics for the new record?

Billy: The joy that is to travel and write. I went to Dublin, Devon, and I spent some time in Los Angeles and Brooklyn. I’ve been living in Holland lately, and I’ve been trying to figure out where I fit in. You can be a little isolated going from touring life and recording life, where you have someone around all the time, to being where people are going to their nine-to-five jobs. So I’m kind of feeling isolation on this record.

There are Senegalese vocals on the album. How did you become interested in African music?

Eric: I studied music in Ghana. I wanted to travel and study music outside of my comfort zone. Bill and I both have an affinity for African culture and music. I don’t speak French, so we weren’t able to communicate directly with the singers. It was a beautiful collaboration because it was solely based on music.

Billy, you busked around the world before you formed the band. Have you always been nomadic?

Billy: Yeah. Travelling and experiencing different cultures was a way of offering myself options. I’m speaking to you from Spain; in my early twenties I was busking on the streets here. I learned about architecture. How the Spanish colonised California. I love connecting dots like that. If I can live a life of art and music and be intellectually stimulated and connect things like this, it’s a wonderful thing.

Was the tour documentary, Rise, that you made in 2013 an eye-opener?

Billy: It was! You’ve got to be careful with something like that that you don’t indulge yourself in it. But after the shows the cameraman was interviewing fans. Some of those testimonials were very powerful to watch. You go through life and you love and you do the best you can, but you’re not sure what kind of impression you made or how you’ve made people feel. But being in a music project like this you do get that feedback, and sometimes it makes you speechless.

You’ve gone for a really big sound on the new album. Is that an attempt to attract stadium audiences?

Eric: It’s not that. We’re just being ourselves. On the first record we were going through a difficult time, and the record represented that. At our core all we desire to be is honest. On the second record [Augustines, 2014] we felt that we had overcome the difficult time and that we had arrived at some place of satisfaction. And later on in life we realised that maybe we weren’t quite there yet. We’ve grown a lot, we know who we are, and we’re not afraid to present ourselves with that abstraction.