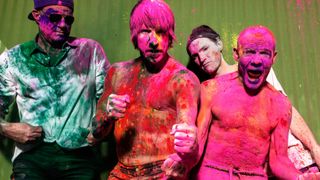 As befits a band who first grabbed global attention by appearing onstage with tube socks sheathing their genitalia, the Red Hot Chili Peppers have always understood the impact and value of a strong visual aesthetic. As a consequence, across their 33-year career the Los Angeles quartet have delivered some of rock’s most iconic and unforgettable promo videos. Here are 10 of their finest…

The most touching track on the Chili Peppers’ tenth album, I’m With You, Brendan’s Death Song is an open-hearted tribute to Scottish-born LA punk promoter (and RHCP biographer) Brendan Mullen, a long-time friend and supporter of the band. It received an appropriately respectful video treatment from director Marc Klasfeld, whose show reel includes videos for Against Me!, Katie Perry, Aerosmith and Charli XCX among others, who took the quartet to New Orleans in May 2012, and filmed them leading a jazz-style funeral procession. Devoid of the band’s trademark gurning, it’s one of the Peppers’ classiest promos.

Regardless of whether you’re familiar with US comedian Dave Sheridan’s starring role as a demented taxi driver in the (equally excellent) video for By The Way, his physical comedy in this video sequel is a hoot, as he gate-crashes the band’s performance at the Coachella festival in order to return a copy of Lexicon Devil: The Fast Times and Short Life of Darby Crash and the Germs (written, incidentally, by Brendan Mullen) which Anthony Kiedis left in his cab. The genuine, unscripted looks of disgust on fellow concert-goers’ faces as Sheridan cavorts around the California site in his short shorts and cut off vest-top makes this endlessly watchable.

Directed by memorably-named actor/film-maker Dick Rude (who also helmed clips for Catholic School Girls Rule and the aforementioned Universally Speaking), this wildly energetic promo starts off biting the Beastie Boys’ style, but delivers some indelible set pieces, including the band covered in fluorescent paint and Anthony Kiedis serenading bemused pedestrians in LA by shouting at them from a moving car while clad only in ludicrous Stars n’ Stripes shorts. A reminder of how raw and raucous the Peppers were before they became Hollywood royalty.

Originally only a b-side, albeit the best RHCP B-side ever, Soul To Squeeze scored its rightful place in the spotlight when it was featured on the soundtrack to the movie Coneheads, and became an unexpected radio hit. Directed by the brilliant Kevin Kerslake (whose memories of working with Nirvana, Faith No More, Green Day, Smashing Pumpkins and the Chilis can be read here) the video draws inspiration from Tod Browning’s 1932 cult classic Freaks, and features the Chilis sharing screen time with a colourful cast of circus performers.

With almost 260 millions views on YouTube it’s fair to say that Californication is the Chili Peppers’ most popular video, and while its video game graphics – with the four band members cast as characters dropped into various life-imperilling situations – might look a tad dated in 2016, upon its release at the beginning of the century this was very much a state-of-the-art production. One of six RHCP promos directed by acclaimed husband and wife duo Jonathan Dayton and Valerie Faris (Korn/REM/Smashing Pumpkins), the clip picked up a brace of MTV Video Music Awards in 2000.

Though this deep cut from Stadium Arcadium was never earmarked for release as a single, it became a fan favourite when the band launched an open contest for film-makers to make a video for the song. From almost 2,600 submissions, the band selected this sweet and rather moving short from Israeli-born newcomer Omri Cohem, which depicts the band as teenagers on a road trip to Venice Beach. Anthony Kiedis said that the clip, dedicated to late Chili Peppers guitarist Hillel Slovak, reduced him to tears: Cohen has since gone on to become a successful ad director in Los Angeles.

Directed by British film-maker Tony Kaye (American History X), the smart, knowing video for the first single from the band’s ninth studio album, Stadium Arcadium, saw the Chilis pay tribute to rock ‘n’ roll history with tongue-in-cheek depictions of some of its iconic performers, from Elvis and The Beatles through to Misfits and Nirvana via Bowie, Parliament-Funkadelic, the Sex Pistols and more. “We love rock music so much and it’s so sacred to us, we just wanted to honour it and bow before it and take our hats off to it,” said Flea. “We would never fuck with the sacredness of rock music. It saved our lives.”

The video that broke the Chilis into the mainstream, directed by Flea’s friend, film-maker Gus Van Sant, is also one of the band’s most under-stated and elegant promos. Most famous for scenes of a fresh-faced Anthony Kiedis walking through LA neighbourhoods, it’s an affecting tribute to the band’s hometown, and landed the group both the ‘Breakthrough Video’ gong and the ‘Viewers Choice Best Video’ at the 1992 MTV Video Music Awards. Much like their frontman in this video, the Chili Peppers never looked back.

Arty and evocative, Stéphane Sednaoui’s video for the first single from the phenomenally successful Californication album taps beautifully into the idea of the LA veterans as survivors, bruised and battered by their tumultuous history but, reunited with ‘lost’ guitarist John Frusciante, newly empowered, re-energised and ready to face whatever the road ahead may throw at them. A tasteful, memorable return.

A true classic, French fashion photographer Stéphane Sednaoui’s beautifully shot promo for the lead single from the band’s breakthrough album Blood Sugar Sex Magik helped transport the Chili Peppers from cult status to genuine stardom. Filmed in black and white, with the band sprayed silver – and looking like sexy, freaky glam rock aliens – the video was largely improvised across a two-day shoot, with Sednaoui attempting to replicate the band’s energy with his own vibrant cinematography. The Chili’s label worried that the clip might prove to artsy and weird for the band’s fanbase, but they need not have worried, for it established the Chilis as a rock band like no other.