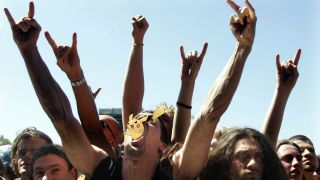 Was your mobile phone reception a little sluggish this weekend? That’s because most of us were hunched over our devices waiting for Pokémon GO to download.

It’s the latest in a long line of spin-offs from the 1996 video game, which has spawned anime series, films, trading cards, the lot – and we can’t get enough of it. It’s all probably down to John Siegler and John Loeffler’s cartoon theme, which is like all the best bits of power metal’s greatest songs caught in a Poké Ball.

In honour of this new chapter in the game franchise’s rich history, here are the 10 best covers inspired by the game…

Straight in at Number 10 is Arkansas riff alchemist Justin Velte, who delivers a faithful version of the theme first heard on the Pokémon: Indigo League series in 1998. With metal keywords such as ‘destiny’, ‘courage’ and ‘power’ peppered across the song’s boisterous main riff, it’s easy to see why this has been covered by so many rock fans over the years.

Here’s 50% of Melbourne metal quartet Waking Fate with their take on the Pokémon anthem. Such is the duo’s intensity, the cover lasts for just over a minute but it’s delivered with all the power of a drain punch to the sternum. We don’t think the fella on the left is taking this as seriously as his mate, though.

Next up are Salt Lake City trio Fall Of A Tyrant, who add some lava-gargling metalcore vocals and pulverising breakdowns to the original song. Would Ash Ketchum own the pit to this cover? Almost certainly.

This Serbian metal five-piece sets out its stall early with some serious Mustaine-esque chugging, before glazing the lot with swelling synths and Nagy Zoltán’s soaring vocals. This is one of the few covers on this list that make you forget that this was the opening theme to a cartoon featuring a electricity-charged yellow rodent.

If you can hum along to it, chances are that riff lord 331Erock will have uploaded a metal cover onto YouTube. Here’s E, shredding away as if all the world was made of lettuce. How does he play with the speed and precision of DragonForce standing on top of a F-14 Tomcat? A scientific study must be made.

This Swedish video game fan has recorded metal versions of a number of popular themes: The Legend Of Zelda, Skyrim, Donkey Kong 2. It’s his Pokémon cover which is a highlight and has had over 644,000 views to date.

This does exactly what it says on the tin. It’s Pokémon. It’s death metal. It’s not as fun as the original.

When it comes to covering classic video game themes, Powerglove do not mess around. So much so, when it was time to record their breakneck cover of the Pokémon song, they roped in Sonata Arctica vocalist Tony Kakko for a loan of those wondrous pipes.

Our Number One Pokémon cover accolade goes to Blake Sharette for this ambitious solo effort: multi-layered harmonies, lightning-fast guitar solos and a voice that sounds like it was plucked from AOR heaven. Plus, when you add the fact he did the lot dressed as Ash Ketchum deserves an extra dollop of respect. He didn’t have to, but it’s the little details that make a difference.