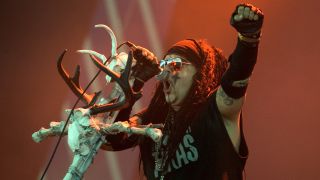 It’s a cold winter in Chicago, and Al Jourgensen has a mess of pus and blood leaking from his left arm.

“I just thought it was some sort of abscess from shooting up,“ says the singer, the outlaw, the creative tour de force behind the city’s most ferocious noise, Ministry. “But I went in to the hospital and they wanted to take my arm off and I was like, ‘Fuck you, man! I don’t play drums for Def Leppard! There’s no way you’re running away with that arm!’. So that got me to wake up, but what did I do? I got out the hospital – after they operated and saved the arm – the first thing I did was go score dope!”

That’s one tale of woe. Here’s another. Four years ago, Al Jourgensen was bitten by a poisonous spider. The arachnid bit him on the toe. At this point, Jougensen was homeless and sleeping on the floor of a Chicago crack den. He lost the toe. He couldn’t, though, let the doctors take his arm ‘cos he needed that. For injecting heroin into. Although it hadn’t always been like that.

“I used to have a recording studio and a 13 bedroom mansion – everything I wanted at my fingertips,” he explains. “From there I lost everything. I lost my family, I lost my daughter, I lost it all. Eventually I woke up on some crack dealer’s floor, clutching my last guitar. I thought, ‘This is bullshit’. I thought, ‘This is the lowest point of my life’.”

In 1992, Al Jourgensen and Paul Barker’s Ministry were one of the most devastating, one of the most innovative rock groups in the world. They began life as Jourgensen’s trendy synthpop solo project in 1981, but by 1988’s The Land Of Rape And Honey album, Ministry had used its dance grounding and fused it with amphetametal breakbeats and righteous anger.

The influence of the band in this period was unprecedented, and Al Jourgensen became a kind of industrial Midas – a cowboy-hatted, leather-clad touchstone for a new kind of futuristic rock music. In 1992, they released the album Psalm 69: The Way To Succeed And The Way To Suck Eggs. Malevolent, drowned in samples and static and jacked-up on technology, Jourgensen growled out addled prophecies and warnings on everything from George Bush Snr (NWO) to heroin (Just One Fix). Even more extreme than the new death metal of the time, Psalm 69… became popular in a large and unexpected way. Gold albums, Grammy Awards, that kind of thing.

But there was trouble behind the scenes.

“The drug thing was always to do with so many variables,” Jourgensen offers. “My environment, I was in an unhappy marriage, blah blah blah. Instant fame that made a lot of money off me being miserable.”

The crash was intense. Jourgensen was encased in an intensely creative community fuelled by chaos and narcotics. A prodigy of acid guru Timothy Leary, and close personal friend of the legendary author and heroin addict William Burroughs (“William lived in interzone. He certainly wasn’t made up of human genetics or DNA as we know it”), Al found that in his work he seemed attracted to addictive personalities, such as Ministry guitarist and smack buddy Mike Scaccia.

“I’m not anti-drug, dude. It’s really great, in a creative process at the right time, but when you cease becoming a drug user and become a used drugger,” – Al chuckles heartily at the pun – “then it becomes really debilitating. But initially, sure it was exciting, it was new, it was great – a lot of other likeminded people wanting to push the boundaries was a lot of fun.”

If Psalm 69’s success accelerated Jourgensen’s drug use, then his drug use almost certainly numbed his creative instinct. Four years after the electric crackle of Psalm’s singles made the rock charts sick, the album’s successor finally crawled out of a creative stupor. Filth Pig was true heroin rock: sluggish, dirge-like, sick-sounding music. Messy and uncoordinated, Barker and Jourgensen tried to pull Ministry back into an electronic direction for 1999’s The Dark Side Of The Spoon, but the inspiration of their earlier work seemed to have evaporated. By the late 90s, Ministry were a forgotten artefact.

Speaking honestly, do you think your habit damaged the music you were making?

“Uh, I think there’s a couple of records that I wish I could have back,” he says. “You don’t get a lot of work done when you spend your days waiting for dealers.”

It was at that point he described earlier – two weeks after having his toe amputated from a poisonous spider bite, lying on a crack dealer’s couch clutching his last guitar for pawning – that Al Jourgensen finally decided to get clean.

“If you don’t even care if you live or die then it’s not so scary anymore,” he says. “It sucks for about a week, or two weeks, when you’re really, really sick. When you’re shitting yourself five times a day. When you’re throwing up about 20 times a day. You’re runnin’ about a 104 fever. You’re constantly cold and you’re constantly hot. And your muscles constrict in unnatural fuckin’ ways, and it’s constant screaming pain. And when it was done it was like, ‘Aah, why didn’t I do this earlier?’. It was easy compared to the life I was living.

“I did it cold turkey and I haven’t looked back since. It’s been four years.”

It must have been difficult going back to playing music again, given that’s what got you into all this.

“It wasn’t difficult – it was my salvation. But I would say it was a lot different. First time ever I was on stage without heroin in 20 years, I was lookin’ around going, ‘Where the fuck am I? What is this weird fuckin’ job that I do? What a weird fuckin’ job!’.

“What’s funny is that all the people who I work with now are all survivors of that curse. We kind of gravitated towards each other. A lot of people OD’d or blew their head off or whatever. These people basically have the old Scarface mantra that ‘every day above ground is a good day’.”

Which is kind of why we’re here now. Why the story of a man and band who wandered so tragically off the map that no-one believed they’d ever find their way back is worth hearing. The 2006 Ministry album, Rio Grande Blood, is fast, fucked, funny – their best and most brutal music in nearly 15 years. It’s a concept album, and the concept is George W. Bush. Angry and outrageous, this is the album that has everything.

Everything except Paul Barker, it would seem. Jourgensen’s creative partner in slime through the lows and the even lowers is nowhere to be found on this album.

“I don’t even want to talk about him ever! He is old news! He was a bass player for God’s sake! Didn’t they have, like, 12 of those in Spinal Tap?”

Maybe it was just a media perception, but Barker was kind of considered to be the backroom musical force in Ministry. The studio computer nerd.

“Obviously I’ve been doing a lot better work since we split,” says Jourgensen, flatly. “But because I wouldn’t do interviews – I was always secluded like fuckin’ Garbo, in the room, shooting heroin – people had the perception that he was Ministry, or certainly half of Ministry or that he was becoming Ministry. But that wasn’t the case. Since we split he’s had nothing out! He hasn’t joined any band, he hasn’t done anything. Me, I’ve got records out! So it’s obvious to me what the fuck was going on there. And that’s all I’ll say about it.”

Are you happy, Al?

“Yeah. Absolutely. This is the best time of my life. I’m pretty content and sedated – outside of the things that really piss me off, which is obviously more social and political topics. I’m getting up there in years, I’m almost 50 and you’re starting to think about your own mortality and you want to see the world a better place than when you came in. We do a lot of work with political groups besides music. That’s very rewarding. And, yeah, it’s a happy time. Instead of banging the phone against the wall because I can’t get a hold of my dealer, by mid-afternoon I’ll have talked to two political organisations, scoured through a bunch of political emails and written a song.”

The drug king is dead. Long live the king!

For more on Ministry, then click on the link below.