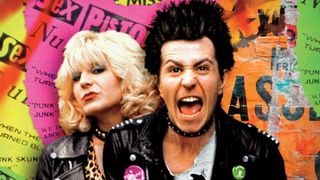 Alex Cox’s stylised film about the short lives and tragic deaths of Sid Vicious and girlfriend Nancy Spungen turns 30 this year. To coincide with the release of a re-mastered DVD and Blu-ray, we present a brief users’ guide to the making of a punk cult classic…

1. Director Alex Cox’s working title for the film was Love Kills, but reportedly forgot to tell music supervisor Joe Strummer of the change until after he’d written the song of the same name.

2. Cox faced a race against time to get the film funded, as rumours were rife in Hollywood about a rival biopic starring Rupert Everett and Madonna. “I felt an obligation to struggle against that project, fearing it would be even worse than mine.”

3. Gary Oldman won ‘Most Promising Newcomer’ at the Evening Standard Film Awards, but has since been critical of his portrayal of Vicious. He went on to play three more real people on screen; Joe Orton (Prick Up Your Ears), Lee Harvey Oswald (JFK) and Beethoven (Immortal Beloved).

4. Daniel Day-Lewis lobbied for the Sid role, but Cox felt Oldman more strongly identified with the part. “Gary was an authentic Bermondsey boy, from the same part of London, the same world as Sid. He understood the desperate need to get out at all costs.”

5. Oldman lost weight to play the emaciated Sid, eating nothing but steamed fish and melon for weeks before shooting began. He was briefly hospitalised suffering from malnutrition.

6. Stage actress Chloe Webb made her film debut as Nancy. Courtney Love also auditioned for the lead role, but had to make do with a fleeting appearance as Nancy’s friend, Gretchen. She had a starring role in Cox’s next film, Straight To Hell.

7. John Lydon met with the actor portraying him, Liverpool-born Andrew Schofield, and suggested, perhaps facetiously, that he should play the part as a Scouser. After the film was released, Lydon was asked what the script got right. “The name ‘Sid’,” he deadpanned.

8. All five original members of Guns N’ Roses appear as extras in a club scene. In his 2007 autobiography, Slash writes that he hung around the set for the rest of the shoot.

9. ‘Rock Head’, who Sid visits at his hotel, is a fictional character. Cox has always been evasive when asked if he was meant to be Iggy Pop, but journalist ‘Dick Bent’ is clearly based on NME’s Nick Kent. Doctor ‘Lance Boyles’ is definitely made-up.

10. The film failed to recoup its $4 million budget on initial release, but eased comfortably into profit on video rentals and remained a regular presence at cult film festivals for decades afterwards.

The re-mastered DVD and Blu-ray Sid & Nancy is out on August 29.