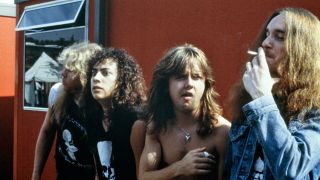 In the 1980s, Metallica formed, invented thrash metal, transcended it and became the biggest cult band in the world, lost their legendary bass player Cliff Burton in an on-tour road accident and battled on without him and gave old Dave Mustaine the boot.

However, along the way they made some of the greatest heavy metal music of all time, dropping Master Of Puppets, the album that helped them break into the mainstream, and the song that catapulted them into megastardom – One.

Here, in ascending order, are their ten best songs from that turbulent decade.

Of the four albums that Metallica made in the 1980s, the last of them – … And Justice For All – was the hardest to love. The band’s first album without Cliff Burton proved controversial for its production, in which the bass playing of Burton’s successor Jason Newsted was barely audible. And in places the music was a little too overwrought, notably on the near-ten-minute title track.

But there were some great songs on the album: the slow-pounding Harvester Of Sorrow, the ferocious Blackened, and most famous of all, One. An anti-war protest song of unremitting bleakness, with sombre atmospherics leading up to an explosive climax of machine-gun staccato riffing, it was also the first Metallica song for which a video was created, incorporating footage from the 1971 movie Johnny Got His Gun – a video once seen, never forgotten.

Metallica’s debut Kill ’Em All was the first thrash metal album, and Whiplash was the song that defined a new genre. Delivered at approximately 200 beats per minute, it was the sound of pure fury, with fantastically gonzoid lyrics that celebrated the bond between band and audience: “In a frenzied madness/With your leather and your spikes/Heads are bobbing all around/It’s hot as hell tonight.”

No band – not even Motörhead – had a greater influence on Metallica than New Wave Of British Heavy Metal heroes Diamond Head. And it was with a version of Am I Evil? – Diamond Head’s greatest and heaviest song – that Metallica began a tradition of brilliant, dues-paying covers. It was featured as the b-side to the Creeping Death single, and its monumental riff is as mighty as anything that James Hetfield of Tony Iommi ever created.

The opening track on Master Of Puppets – the band’s third and greatest album – Battery lived up to its title and then some. After a slow and ominous intro, the calm before the storm, the band hit high gear in an all-out assault on the senses. Only Slayer, with their 1986 album Reign In Blood, could match the speed and intensity that Metallica achieved here.

On the album that launched thrash metal, it was the slowest song that became an anthem. With its monster chugging riff, titanic chorus and – in the fine detail – some killer bass licks from Cliff Burton, Seek & Destroy is a thing of simple beauty. From the band that was revolutionizing heavy music, this song was a no-brainer with a base sensibility encapsulated in Metallica’s avowed mission statement: ‘To bang the head that does not bang.’

What Metallica created with Fade To Black from Ride The Lightning – thrash metal on an epic scale – was perfected on the following album Master Of Puppets with Welcome Home (Sanitarium). Inspired by the classic novel and movie One Flew Over The Cuckoo’s Nest, the song had Hetfield deep inside the mind of a patient in a mental institution. Heavy with dramatic tension, it’s a genuine masterpiece.

After Dave Mustaine was kicked out of Metallica, he famously said: “I was out for blood – theirs.” Mustaine proved with his own band Megadeth that he was one of the most innovative figures in metal music. Moreover, his contribution to Metallica should not be underestimated.

Six songs co-written by Mustaine featured on the first two Metallica albums, and the best of them was The Four Horsemen. Mustaine recorded a version of the song for Megadeth’s debut album Killing Is My Business… And Business Is Good! – with a different arrangement, his original lyrics, and an alternative title of Mechanix. But the Metallica version is the definitive article, a multi-riffed juggernaut and the defining track on Kill ’Em All.

From the band’s second album Ride The Lightning – considered their best by some connoisseurs, among them former Sepultura frontman Max Cavalera – Creeping Death is an epic of truly Biblical proportions. Hetfield is masterful in telling the story of the Plague Of The Death Of The Firstborn from the Book Of Exodus.

And befitting of its heavy subject matter, the song was built on one of his most brutally thrashing riffs. With its chant of “Die by my hand!” perfect for crowd participation, Creeping Death has been performed live more than any other Metallica song bar Master Of Puppets.

If there is one Metallica song above all others that proved they could play as heavy slow as fast, it was this. There were songs on Ride The Lightning as frenetic and intense as anything on Kill ’Em All – chief among them, the opening track Fight Fire With Fire.

But this was also an album on which the band moved far beyond the limitations of the genre they had done so much to inspire. Fade To Black was the first thrash metal power ballad, and For Whom The Bell Tolls was the album’s towering peak, with a slow and heavy groove and a glorious melodic power.

It is, quite simply, the definitive Metallica song – the title track from the album that ranks with Paranoid, British Steel and The Number Of The Beast as an all-time heavy metal classic. There are more famous Metallica songs, such as Enter Sandman and Nothing Else Matters, but Master Of Puppets is the absolute pinnacle of the band’s artistry.

Written by all four members of the band’s classic line-up – Hetfield, Ulrich, Burton and Hammett – it is a vast and complex track of awesome power and genius-level riffing. 1986 was thrash metal’s greatest year, with landmark albums such as Reign In Blood, Kreator’s Pleasure To Kill, Dark Angel’s Darkness Descends, and Megadeth’s Peace Sells… But Who’s Buying? But what Metallica created in Master Of Puppets made them the greatest metal band of its generation.

For more 80s goodness check out the latest issue of Metal Hammer magazine – it's an 80s extravaganza! For more information and to peak inside click here or just go ahead and order your copy over at My Favourite Magazines.