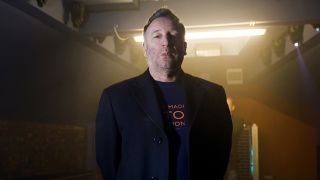 “Hooky by name, hooky by nature.” This is the self-assessment issued to Louder by Peter Hook, and it’s difficult to deny he makes a good point. As co-founder and bedrock of post-punk trailblazers Joy Division, Hook helped to provide an essential template for the nascent movement. When their frontman Ian Curtis sadly passed away in 1980, Joy Division’s remaining members melded their indie sound with the emerging club scene to create the equally influential New Order. Hook’s low slung, melodic bass style inspired countless others, with New Order carving out a sound which would become embedded in British pop music’s DNA.

Now in his new outfit Peter Hook And The Light, he is revisiting the back catalogue of both bands. Here, he talks us through his favourite Joy Division and New Order basslines.

“I wish I had a list here to prompt me now. I suppose in a funny way I’ll go for Crystal… Or, can we have an either or? Funnily enough it’s Crystal/60 Miles An Hour. It was a great time for New Order, and I always remember it very fondly. I know it’s not a great time now, and it wasn’t a great time thereafter, but at that precise moment in time Bernard and I were writing together so well that those two bass lines I was very, very proud of. I really was. I thought we did such a great job, and they are quite unique, but very Peter Hook basslines.”

“This was New Order’s single after Blue Monday [and] I always thought [it] was a much, much better song. It’s a very powerful bass line. I’m not ashamed to say I stole it from Emma, by Hot Chocolate, and used it to great effect. It was wonderful, because I did bump into Errol Brown and felt that I had to confess, and Errol Brown said to me “Well done, my boy!” Which was very nice of him I thought. These days, he’d be bloody suing you, wouldn’t he?”

“This was [written] on a six-string bass. It’s a very simple but very melodic bass line that to me seems very heartfelt and sincere. It’s a nice thing to play, and a nice thing to listen to. It’s quite weird, because in those days you’d be writing the songs with the guitars and then adding the keyboards, as opposed to when we became… keyboard-led, shall we say. It then became much more difficult. So when we were leading with the guitars, it was actually a nice position to be in, whereas once the keyboards were leading, you always felt like you were trying to squeeze yourself on.”

“This was the first bass riff I wrote around a song. The whole song was written on a six-string bass, and I sang as well, which was quite unusual. So it was unusual for me to play – I was a singing bass player, which I always think are the kiss of death. Until I became one, and then I realised it was the kiss of death! We’d just lost our singer, so that was very daunting. It’s amazing how vulnerable and naked you feel singing. I realise now why people play and sing, because it’s so much better. Even now, if I break a string and I lose the guitar, I really feel like my pants have fallen down. It’s a really odd feeling. It’s hard to explain, actually, because really just taking your guitar off shouldn’t leave you feeling that naked, especially when you’ve been a musician for 40 years. You’d think you’d have a handle on it, but no, it still makes you feel terrible.”

“Transmission started with the bass line, turned into our first hit record, and it’s a very very simple chord sequence, very effective. You can hear that youth, that you’re a punk and you mean it in the bass riff, which is obviously the most important thing in the world.”

“I suppose the next one would be the same sort of formula, which is New Dawn Fades. This is the one that is very simple. The chord sequence of the bass is dead simple right the way through, and my trademark in the early days was playing the same bass line right the way through the whole song, and everybody else would move round it, so this song is like that.”

“It got voted the favourite rock song to be played at funerals, which was a very dubious honour! The other one was Robbie Williams, Angels, which was the song most likely to be played at weddings. I must admit, every time I go to a funeral and hear Atmosphere, I do wish we’d have written Angels, without a shadow of a doubt. But, again, it’s a wonderful bass riff. The song was written in two halves, with the bass written alone, then Bernard did the keyboards afterwards, so we had two songs. The brainwave of putting them together was absolutely amazing. It is very moving and very melancholic, which Ian capitalized on with the vocal line and the lyrics. So it’s a very simple, evocative bass riff. I’ve been very lucky, I have to say, for a bass player. I was encouraged by Ian Curtis, I would have to give him the accolade for that – it was always him that would encourage me to try and get a hooky bassline – I suppose it’s hooky by name and hooky by nature!”

“24 Hours was such an individual and unique bass riff, and funnily enough I’ve noticed that over the years that it’s a song that a lot of bass players quote as being their favourite bass riff. I mean, my favourite bass riff, funnily enough, is the bass riff to Just My Imagination by the Temptations, so it just shows you how strange they are. But again it has the wonderful elements that you die for in a song – melodic drop downs and really rocky highs. And again, if I say so myself, the song is lead by the bass. It’s just an absolutely fantastic riff.”

“The great thing about being young as a musician is that you’re not overdrawn at the riff bank yet. You come up with a lot of riffs [seemingly] very quickly. As you get older, they come much slower. When we started off as Joy Division, every riff we came up with felt like a gift from God. One in particular, Love Will Tear Us Apart, Ian then took as the vocal melody line of the song and he gave me, I suppose, my best-known bass riff of all. It was really simple, it was written in three hours from start to finish. It was basically all around the bass riffs, and it was one of the easiest, simplest things. I can’t remember any song being as easy as that one.”

Peter Hook And The Light have a number of new live albums available now.

The Story Behind The Song: Love Will Tear Us Apart by Joy Division