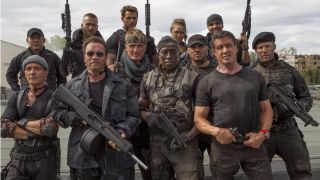 We're fans of the Expendables franchise here at Metal Hammer – the first one was good, the second one was better, so what of the third instalment? Well, you better read on and find out, hadn't you?

Rocky Is In It

Survivor – Eye Of The Tiger, that’s all you need to know right? It’s an anthem, and it exists because of Sylvester Stallone – they wrote it at his request, in order to use it for the theme song for Rocky III. Also, Rocky is Rambo, and Rambo rocks.

The Terminator Is In It

The Terminator is a robot, robots are made out of metal. You don’t get more metal than metal, do you? Especially when said metal is running about the place shooting people and making things explode. He may not be a robot in The Expendables III, but he still does exactly the same thing.

Blade Is In It

“Some motherfuckers always tryna ice-skate uphill” is possibly one of the greatest lines ever uttered on film. It came from the mouth of Blade, which also makes it a thousand times cooler. Well, Blade is back in this one, and every line he says is a thousand times cooler than anybody else’s. “Yes, but you haven’t mentioned anything metal” we hear you death-scream. Well, Blade had a sword, didn’t he? Leave us alone…

Crank Is In It

Crank is just about the most metal film you can think of. It’s completely insane and pummels relentlessly at your skull, eyes and ears for an hour and a half – you know, a bit like a Cannibal Corpse gig. Also, Chester Bennington is in the sequel, so there’s that too, if you’re into that kind of thing…

Desperado Is In It

Oh, your guitar is actually a ROCKET LAUNCHER? Oh okay, I shall put my guitar away and forever be in awe to your world-eating instrument. I apologise. You are the most metal. I am but a piece of plastic.

The Punisher Is In It

No, not Thomas Jane. No, not Ray Stephenson. The original Punisher – Dolph Lundgren. The Punisher is easily the most metal of all superheroes. Firstly, he’s not ‘super’ – he doesn’t need any special powers – and secondly, he doesn’t wear any stupid costumes. He sticks with boots, black jeans, a leather jacket and a black t-shirt with a skull on it. He basically dresses like every Motorhead fan ever.

Ronda Rousey Is In It

She’s the number one female MMA fighter in the world. Why is that metal? Because if you say it’s anything else she’ll beat the shit out of you, that’s why.

There Are More Explosions Than Dialogue

Explosions and metal go hand-in-hand – just ask Rammstein or KISS. Well, in The Expendables 3 there are so many explosions that you’d swear you were watching the most insane concert on the face of the planet.

There Are More Guns Than Explosions

You Can’t Tell What The Hell Is Going On Ever

It’s basically like being in a Devildriver pit for 90 minutes.

Yeah, it’s not actually that great. It’s a 12A for some reason, and so is nowhere near as extreme as an Expendables film should be. It’s also got loads of young actors in it, who aren’t famous enough to be cast alongside their older veterans. We’re not watching an Expendables film for the young bloods, we want old, grizzly bastards on zimmer-frames shooting the hell out of everything and anything. They dropped the ball big time here. What a shame.

The Expendables 3 is out 14th August in the UK