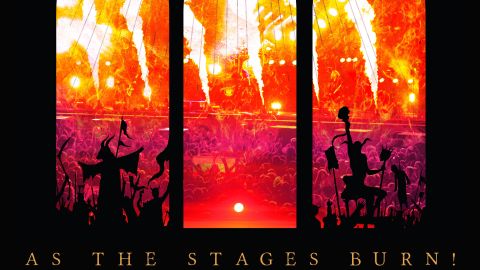 The significance of Arch Enemy’s new DVD is twofold. As The Stages Burn! brilliantly captures the melodic death metallers’ headline performance at last year’s Wacken Festival, plus backstage and further live footage and unreleased videos. It also marks the end of the band’s War Eternal album cycle, itself a bold new front for the band.

In 2014, the formidable Angela Gossow surprised the metal world when she announced she was stepping down as frontwoman. Undoubtedly, her successor, Alissa White-Gluz, had some mighty boots to fill, but that’s why …Burn! is a lesson for non-believers everywhere. Energetically shot, Arch Enemy have never sounded or looked more alive, and the crowd, bellowing back every word, have clearly embraced the new lineup. Alissa commands them with just as steely a grip as her predecessor, and combined with a two-pronged guitar assault of punishing riffs and blistering solos from Michael Amott and new(ish), ex-Nevermore guitarist, Jeff Loomis, the effect is monstrous.

This is much more than just a simple visual document of the band’s biggest live production to date, it also closes a chapter in Arch Enemy’s history – and perfectly celebrates the dawn of new one.