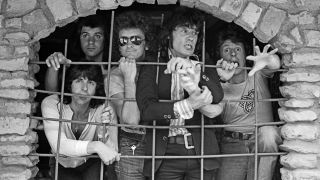 Alex Harvey often joked that his was the longest internship in the entire history of rock’n’roll. The Glaswegian was 40 by the time he scored his first hit in 1975, when The Sensational Alex Harvey Band covered the old Tom Jones favourite Delilah.

The previous couple of decades had seen him front his Big Soul Band, release a succession of failed solo records and serve in the house band in the West End production of Hair. It was an extended practicum that fed directly into one of SAHB’s most celebrated songs, The Last Of The Teenage Idols.

“The whole thing started because it was a sort of tribute to when Alex won a competition to find Scotland’s Tommy Steele,” explains former SAHB bassist Chris Glen. “It was the fifties, and Tommy Steele was like the Elvis of Britain at that time, so the song was leaning towards that.”

“Alex used to look back on the whole idea of it as quite comical,” adds drummer Ted McKenna. “You can hear the sarcasm in the song, and the intonation in his voice, especially at the end, is quite funny.”

The search for the regional answer to Steele was initiated by the Sunday Mail in April 1957. After trialling around 600 young hopefuls across Scotland, 22-year-old Harvey was judged by the experts to have the requisite star quality, upon which he was awarded £25 and an auditioning contract with a record company.

Sixteen years later, and still waiting for his big break, Harvey resurrected the experience for The Last Of The Teenage Idols. It’s an ironically titled epic that acts as a condensed history of the music that had sustained him throughout his career, with a classic doo-wop finale that crossed way over into pastiche. “The idea was to go through the whole gamut of music from the fifties right up until the seventies,” recalls Glen. “We had a melodic piano piece that was light and romantic, but which could also be played as a heavy riff. There was a rocky section with an avant‑garde solo, then some brass, and of course a complete piss-take of 50s doo‑wop. It was great fun to do.”

The song is astonishing in its ambition and scope, and all the more impressive given that, according to Glen, SAHB recorded it in one take. Producer Phil Wainman gave it added punch and depth, while the entire thing was held together by the hard-bitten menace of Harvey’s voice and the theatrical imagery that salutes the indestructible spirit of rock’n’roll.

“Alex and I were holed up in Nazareth’s flat in Bayswater when we wrote the song,” recalls pianist Hugh McKenna, Ted’s cousin. “We used to stay there when they were on tour. There was a little pub on the corner so we’d go down there beforehand, have a couple of bitter lemons and vodka, then go up to the flat. A spliff may have appeared at some point, then we’d start work.

“Alex showed me the lyrics, and I remember doing the piano intro on a lovely Steinway grand. I’m struck by how serene and peaceful it sounds today.”

Glen, the McKennas and guitarist Zal Cleminson had all been members of Scottish prog rockers Tear Gas immediately prior to forming SAHB. Their union with Harvey came about after both parties had shared a bill at the Marquee in the spring of 1972.

“Alex was thirty-eight and I was twenty-two, so he was like our dad,” says Ted. “The band was very strong musically and needed somebody as strong to focus it. Not only did Alex have natural charisma, he often spoke about the time he’d spent in Hair, watching how the producers directed the stage performance. Alex was a master of telling the crowd where to look. It was almost like variety mixed with street theatre. Alex always said from the beginning that they’re either going to love us or hate us; there wasn’t going to be any middle ground.”

The Last Of The Teenage Idols was a perfect showcase for SAHB’s juxtapositional sense of drama. Recorded in August 1973, it became the closing track on that year’s Next, alongside other grandiose works such as The Faith Healer.

“There were certain songs that the audience could always relate to and get involved with,” says Glen. “There’s a bit at the end of the first verse, where it goes: ‘You can call me the last of the teenage idols…’, and Alex would never have to sing that. He’d just stop, and the audience would do it.”

By the time the album was released that November, SAHB had rapidly become one of the top live attractions in the country. It had been a year in which they’d supported Slade on a major tour around the UK, headlined their first tour and made a striking impression on TV’s The Old Grey Whistle Test, performing Next and The Faith Healer.

1973’s crowning glory, however, was their show-stealing set at the Reading Festival in front of a crowd of 30,000, playing in the middle of the bill. Hugh McKenna remembers having what he calls “a psychic experience. After we came off stage I told everybody in the band that the music papers would be all about SAHB in the next few days. And when I went out and bought the NME and Sounds and Melody Maker, there it was.

“The gig itself was kind of miraculous. The sun was just going down and Alex had his arms aloft, with a peace sign in each hand, waiting for me to start the intro to Faith Healer. And when the band came in, the crowd started swaying. I think the Reading Festival really kick‑started the whole thing for us. It took us to a different level.”

“Alex had a habit of coming up to me on stage and hammering my cymbals during the solos,” recalls drummer Ted McKenna. “Joe Elliott came to see us one night at Sheffield City Hall, right at the front. Alex hit a cymbal, it fell off the riser and rolled towards the edge of the stage. Joe told me years later that it actually cut the edge of his hand. It was lucky it didn’t take the bloody thing off. But SAHB was a big inspiration to Joe. There was really no one else around like us.”