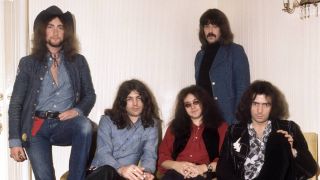 If there’s anything likely to upset Ian Gillan more than a self-styled moral crusader with a viewpoint diametrically opposed to his own, it’s two of them. Back in 1972, with Deep Purple Mark II at the height of their fame and touring to promote Machine Head, that holier-than-thou duet were Mary Whitehouse and Lord Longford.

Committed Christian Whitehouse, in her assumed role as guardian of Britain’s moral standards, led the ‘Clean Up TV’ campaign, railing against anyone who dared swear the word ‘bloody’ on television. She was driven apoplectic, therefore, by the Alf Garnett character in Johnny Speight’s seminal anti-racism sitcom Till Death Do Us Part (much loved by Gillan), as well as comedians Dave Allen and Benny Hill, and just about everything else that made the rest of us laugh.

Then, as Purple were about to commence sessions for what would become Who Do We Think We Are, news broke that former Labour minister and Knight of the Garter Lord Longford was campaigning for the release of Moors Murderer Myra Hindley.

Nearly four decades later Gillan recalls: “Mary Whitehouse and Lord Longford were particularly high-profile figures at the time with very waggy-waggy finger attitudes. On reflection, it’s a little bit unfair because the generation before – in the post-war period – were extremely generous to us. But it’s just natural to rebel.

“Mary Long grew out of the whole idea of dealing with an imaginary person. It was about the standards of the older generation, the whole moral framework, intellectual vandalism – all of the things that exist throughout the generations.

“I had a lot of issues with the religion that I grew up with, but as I found out later, those issues exist in all religions, so Mary Whitehouse and Lord Longford became one person – fusing together – to represent the hypocrisy that I saw at the time.

“So there I was slinging names about and accusing them of all sorts of things – dastardly deeds and vile occurrences! The idea was that we are young, we are naked and therefore we are truthful. I never met a 20-year-old who didn’t think they were immortal and didn’t lack an opinion on everything – it was that sort of time.”

It was also a very unhappy time in the singer’s life. His relationship with Purple’s guitarist Ritchie Blackmore – who to this day he’ll refer to only as “the banjo player” – had broken down. Bassist Roger Glover also recalls the period with sadness as Blackmore became increasingly remote from the band, completed by drummer Ian Paice and Jon Lord on keyboards.

“It had gotten to the point where Ritchie wasn’t interested in doing anybody else’s ideas. I remember in particular coming up with a chord sequence which I thought would be an interesting idea for a song. I’d written this out on a piece of paper – four or five chords or whatever, nothing much, and a certain rhythm. I said to Paicey: ‘Start this rhythm, about this time.’ Jon started playing. I started playing. But Ritchie just looked over my shoulder at this piece of paper and didn’t put his fingers on the strings even once – so the jam quickly fizzled out. “Instead, he started playing another riff. It may have been Mary Long or perhaps another one – something mid-tempo – as a lot of his riffs were starting to sound the same, nearly all variations in G…”

Part of the problem was pressure of work. The band flew to the States four times in the first six months of 1972. as well as playing dates all over Europe. Whatever the causes, things had become so bad that when Purple first found time to interrupt their almost non-stop touring schedule in July – for recording sessions in a rented villa near Rome – Blackmore refused to stay in the house with the others and often didn’t come to the sessions at all.

Gillan: “I remember the joys of the local red wine, the underwater swimming championships in the pool and the eternal frustrations of trying to perform as a band while 2. per cent short in number…”

Those sessions produced just two songs in three weeks – “Pathetic!” admits Glover – Woman From Tokyo and Painted Horse, the latter a song Blackmore soon decided he hated and barred from the album.

The band went back on the road, first visiting Japan in mid-August. The three shows, one in Tokyo and two in Osaka, were recorded and – ironically, given the strife – saw the band compile their Made In Japan live album, released in December ’72.

Mary Long was recorded earlier during October using the Rolling Stones’ Mobile Unit parked outside studios in Waldorf Nord, near Frankfurt. The band would rarely be together as a five-piece. Worse, Blackmore was hatching plans to recruit Paul Rodgers to replace Gillan and launch a trio called Baby Face, who had cut some demos with Phil Lynott and Ian Paice.

Glover recalls the ideas for Mary Long were staring them in the face: “We had English papers delivered at the studio so we kept up with the news and those were the two people that got up our noses. It seemed that it was all getting much too pro-censorship and pro-do-gooder.”

Whitehouse’s supposed sexless piety produced an extra spot of inspiration when the tabloids reported her pregnancy.

Glover: “Ian came up with a great line: ‘We never really knew you’d had it in you’ – ever the master of the double-entendre!”

So was the combination of the two names a ploy to avoid any charges of libel?

Gillan: “Christ no! I’ve always enjoyed impressionism in lyrics and resented other people plugging their political values and social attitudes in that way. That wasn’t me.

“Mary Long was of its time, but is still relevant today – as our soon-to-be ex-government will find out…”