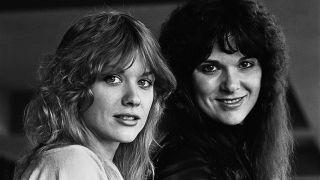 In early 1975, the elder Wilson sister was in the throes of a mad love with a young guy called Michael Fisher. A draft dodger, Fisher lived in Vancouver in what Wilson calls a “Tolkien house with a big driftwood bed”, and it was there that the lovers spent their blissful nights, while brooding over the chaos around them.

“The world had gone to hell in a hand basket and the culture was just standing on its ear and everything was overwhelmingly in trouble,” Ann recalls. “Bombs and devils and the Vietnam War and the gas crisis. It was very frustrating. So I poured that frustration into the words of the song. I was in a very close relationship with Michael. When you’re in that situation you just climb up into your love’s lap and say: ‘Oh God, what do we do about this world?’ That’s the feeling of the song.”

Ann took the lyrics to her sister Nancy. “I remember I had a bad flu and was kind of delirious,” Nancy says. “The lyric was so great that it kind of lifted me up in my sick bed. Two days later I was better, and we started to set it to music. We were listening to a lot of Moody Blues back then. There was a [Moodies] song called Question that had this fast, fiery guitar rhythm. That was our idea for the groove. Then [guitarist] Roger Fisher came up with the really cool riff over A-minor to F, and that gave it some more beautiful momentum.”

At the time, Heart had a strong local following in Vancouver, and a regular gig at a club called Lucifer’s. “That’s where we first did Crazy On You. And I think I finished writing some of the words to the song in the club. It’s always good to write out there in the middle of the action.”

Like any young, hungry band, Heart wanted a record deal. But every label in Canada, plus a few in the States, had turned them down flat – at least twice. Finally they decided to gamble on a Vancouver indie called Mushroom. What Mushroom lacked in manpower and money, they made up for by owning their own studio which, Ann says, was equipped with “great tube mics, a sixteen-track machine and the mixing board that had been used at Muscle Shoals in the sixties”.

“I wanted to write an acoustic guitar intro before the song started,” she says. “So I sat for a few days, just trying to channel that first bar. I wanted it to be really memorable. It was the hardest part, finding a way in. But now, every time I play the introduction, everyone recognises it right away.”

With the basic drums/bass/guitar track done, Ann stepped into the vocal booth. “That was before you could auto-tune or process, so you were really out there singing and performing,” she says. “If you went out of key or said the words wrong, you had to stop and do it again. It was a lot of work. But as a singer it kept you focused.”

With Crazy pressed as Heart’s first single, the girls hit the road, visiting radio stations in Canada and America. Though women’s lib was going on, the music business was still a man’s world. “There were two of us, and we were both singers and writers and leaders of the band, so we were very different than anyone they’d encountered. It took a while for us to be accepted.”

Ann estimates that she’s sung Crazy On You “over 16,000 times” since it became a hit. “After many renditions, it’s still satisfying because there’s no bullshit in that song. The words still resonate because I still feel the same way about the world. The song gave a lot of people hope, because they would look at the challenges and difficult things in their lives and think, ‘The world is really screwed up but I have this person who loves me,’ and that’s what the song is really all about. When someone says: ‘If it wasn’t for your song Crazy On You I wouldn’t have made it through this,’ that is so dear. I can’t even begin to describe how it makes me feel. It makes me so deeply happy, like I guess all the work and all that I’ve given over the years really does mean something.”

Heart: the gospel according to Ann Wilson