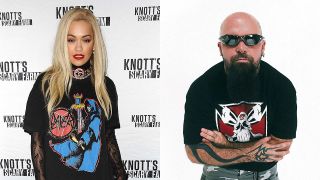 On June 16, 2014, the morning headlines doused the metal world with an ice-cold bucket of reality – vapid TV personality Kendall Jenner had been rehearsing for Canada’s MuchMusic Video Awards… wearing a Slayer shirt. Metalheads railed against the abomination. Were we to believe that Jenner was a fan? That she blasted Dead Skin Mask on her way to yoga?

Of course not. It was clear that Jenner was simply fronting an image. Celebrities prancing about in Kiss or Led Zeppelin shirts were one thing, but Slayer were different. They were never meant for public consumption; Slayer were our thing. Not anymore. Now you can scoop up official Slayer merch at Hot Topic, H&M and Topshop. And people who couldn’t rattle off a single Slayer song somehow have a basic understanding of what they represent. So how did one of the world’s most violent and blasphemous underground bands end up as an enduring fixture in pop culture?

To understand Slayer’s emergence as a cultural tour-de-force, one must remember that their ascension into the pantheon of super-stardom was no lucky turn, but rather the result of 30 years of back-breaking tours, a visionary approach to songwriting and a combative refusal to dilute their music for the mainstream. It’s an ethos that has resonated in the hip hop community, so it was hardly surprising that Public Enemy sampled Angel Of Death as the backbone of 1988’s She Watch Channel Zero, and a West Coast rapper by the name of Ice-T took notice.

“I first heard Slayer way back when I heard Rick Rubin was working with a rock band,” recalls Ice today. “I was familiar with him working with hip hop artists like LL Cool J and Beastie Boys. My friend Glenn Friedman told me, ‘Rick’s doing a “speed metal” band.’ I investigated and I liked it.”

Ice later recorded Disorder with Slayer and formed Body Count, who paid tribute to Slayer on 2017’s Bloodlust with a scorching cover of Raining Blood. Looking back on Body Count’s inception, Ice says, “We wanted to play fast and aggressive, and for me, Slayer was the bar in that style of music. There’s a lot of bands that you’d call thrash bands, but Slayer to me sounded the best.”

The unlikely nods didn’t end there; Lil’ Jon sampled both Raining Blood and Mandatory Suicide on 2004’s Stop Fuckin Wit Me and ethereal songstress Tori Amos did her own, unironic cover of Raining Blood in 2001.

Outside of the music industry, Slayer tracks have enjoyed high-profile slots in a vast number of movies, invariably in scenes that call for a heightened sense of violence, danger or evil. Their soundtrack contributions run the gamut, from 80s cult flicks like River’s Edge and Less Than Zero, to horror films like Bride Of Chucky, Saw III and The Devil’s Candy. Occasionally their songs pop up in less likely scenes, such as Die Hippie, Die, the South Park episode where Eric Cartman hijacks the PA system at a jam band music festival and cranks Raining Blood to drive the hippies away. Their mainstream TV appearances even extended to the band being invited to play on Jimmy Kimmel Live!… twice.

Perhaps the quirkiest and most reverential use of Slayer music occurred in the second season of Showtime’s Californication. Lead character Hank Moody – a hard-drinking author played by David Duchovny – names his books after Slayer albums. So popular was this storyline that in 2009, publisher Simon & Schuster commissioned a real-life version of God Hates Us All, ghost-written on behalf of Moody’s character. And we’d be remiss in not pointing out the excellent scene in Gremlins II, when one of the titular characters transforms into a terrifying, spider-like monster to the breakneck throttle of Angel Of Death. Gremlins and Slayer – what’s not to love?

On tour, Steve-O used Slayer as his entrance music. “For years on end,” he says, “my entrance song at shows was Raining Blood. As I made my entrance, I’d come onstage with a 12-pack of Budweiser. As the tune broke, I’d start smashing the cans on my head until they broke and then I’d spray beer all over the crowd. Embarrassingly enough, after getting sober, I continued to do that in comedy clubs with club soda cans. I’d come out with the same tune and do the same thing, smashing cans of soda on my head to Slayer; this fucking 40-year-old smashing cans of soda into his head to Raining Blood!”

Not only directors and producers, but game developers understand that Slayer music offers a quick and effective way to ratchet up a game’s intensity. Videogames like the Guitar Hero franchise, Skate and Grand Theft Auto: Vice City, have all licensed Slayer music and the band also appear on Brütal Legend, the metal-inspired game that has enjoyed frothy appreciation among game-playing headbangers.

On a deeper level, Slayer have come to embody an idea that stretches far beyond their music. Their name alone conjures a spirit of brazen defiance and the visceral allure of something dark and forbidden. Comedian and television host Jim Jefferies involved Kerry King in a recent sketch about incels - an outlier group of men who are ‘involuntarily celibate’. Jim summons Kerry at the end of the sketch to prove that you don’t have to look like a supermodel to be incredibly cool. What’s interesting is that Jim understood Slayer’s aura without even being a fan of their music.

“As a band,” he says, “I don’t know them. I know Raining Blood, but that’s about all I know. I was never a teenage Slayer fan and I don’t want to present myself as one.” And yet, Jim gets it, explaining, “They started playing together as kids and there is an authenticity to them. I’m not saying there isn’t with other bands, but Slayer were never manufactured in any way. They are just Slayer. Me being friends with Kerry has given me plenty of street cred with younger comics, who now think I’m cool as fuck. And Kerry is older than me! That shouldn’t give me street cred, hanging out with some old rocker, but it does. And if you can bottle that… fucking tell me how to do it!”

The idea of repackaging Slayer’s mystique brings us back to the notion of pop-loving hipsters wearing their t-shirts. Though distressing for metalheads, Slayer have become shorthand for cool. Brian Lew, co-author of Bay Area thrash biography Murder In The Front Row, managed Slayer’s online store for many years. He sees their commercial appeal as an extension of their ethos.

“Slayer are one of those bands that have cracked mainstream retail,” he says. “It all comes down to branding. Slayer have never sold out. They’ve never made music that you’d hear playing in a mall. Whatever mainstream stuff has come to Slayer is because they remained true to who they are.”

Despite the proliferation of Slayer logos in clothing stores, Brian agrees that Slayer are far more than a fashion statement, but an image and a worldview that people are drawn to embrace. “People attach an attitude to the shirt. It’s a tribal thing. There are legit fans who wear the shirts because they want to represent the band and the music means something to them. But then there are people who want to front that image, so they wear a Slayer shirt. Sure, fashion is part of it but at the same time there’s more to it, otherwise they’d be wearing just a black shirt with nothing on it.”

There was a time when you could safely assume that somebody wearing a Slayer shirt would be more than happy to chat with you about the band’s music, but that’s no longer true. To measure the vast extent of Slayer’s influence, one must go beyond their metal legacy, because Slayer are now so much more than their music; they are a highly recognisable brand and a bona fide cultural institution. Long after their final show, Slayer will remain firmly entrenched in the cosmic consciousness as the standard-bearers of brutality, a reference point for ferocity and some of the finest musicians to ever tread planet Earth. Long may they reign…