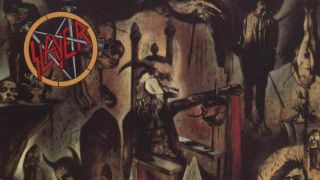 Regarded as one of the finest thrash metal albums of all time, Reign In Blood broke new ground for Slayer, giving them a cooler, suddenly streetwise overhaul. By then signed to the fast rising Def American label – best known at the time for its rap output – the band had the advantage of rap rock producer Rick Rubin’s input on a set of songs that were to define – and, indeed, overshadow – their career.

“We needed to have an album sleeve that reflected what we were about,” said frontman Tom Araya at the time. “We weren’t after our version of Iron Maiden’s Eddie, but it needed to be striking.”

The band decided to take inspiration from what was effectively the title song, Raining Blood, which had a distinct feel of being trapped in hell for eternity, and a distinctly 1980s horror blend.

“Thats where the album concept came from,” Araya says now. “So we commissioned an illustration especially for the cover, giving this idea as the basis.”

The man hired to do the artwork was Larry W. Carroll, who came back with two paintings. The band asked him to amalgamate them into a single picture.

“We’ve always tried to make sure that what you saw on the sleeve reflected the music,” guitarist Kerry King mused following the album’s release. “It had to be extreme. In a way, we’ve done the job if it makes pop fans feel ill.”

While Carroll did the artwork, it was designer Steve Byram who gave it form and emotion. A New York based artist, Byram had recently completed the Beastie Boys’ Licensed To Ill sleeve that same year. He gave Reign In Blood a unique style combining graphic comics, cartoons and underground horror.

“For me, an album is a whole concept. When I pick up a record, it’s obviously the cover that I see first and it should tell you something about the music,” said Araya. “There are too many bands who concentrate solely on the songs and don’t pay enough attention to the packaging. That’s a huge mistake and one we’ll never make.”

The album did cause Slayer a few problems, but not because of the sleeve.

“People misunderstood the sentiments behind the song Angel Of Death and believed we had Nazi sympathies,” explained Araya. “That was never the case. But the cover never created any negativity.”

“One of the reasons why Reign In Blood became a classic is the impact of the cover,” added King. “It screams metal.”