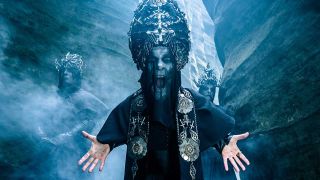 Behemoth frontman Adam ‘Nergal’ Darski and his arch enemy Jesus Christ have resurrection in common. Diagnosed with leukaemia in 2010, Nergal recovered with a renewed lust for life and the determination to oppose his enemies in the Catholic Church, an institution that he believes poisons hearts and minds across the world. “I’m here for a reason,” he says passionately. “I’m a fucking cosmic child sent to make some fucking impact, to impress some people, to inspire.”

Such supreme confidence, not to be mistaken for arrogance, can only come from the lips of someone who has had a close brush with death. “The crucial reflection I had was that my life may end any time, so from then on I’ve made sure that I live the way I want to, never compromising for money, friends or attention,” he reveals. “I’m only going to do stuff I’d die for; that I’m passionate about. That’s how The Satanist was born.”

Behemoth, Poland’s premier blackened death metal band – completed by bassist Orion and drummer Inferno – have spent 27 years refining their unique brand of brutalising blasphemy. 2014’s The Satanist was their magnum opus; the album that almost never was, that became the most significant extreme metal album of the decade, signifying not only that Nergal was back, but that his band were ready for the next level. The response was rapturous from all quarters, the live shows in support of the record devastating; it was an easy choice for Metal Hammer’s album of the year.

“The Satanist was a second coming for us – we made no compromises,” affirms Nergal. “I knew it might be the last record. When I said that, I wasn’t just trying to piss people off, I believed it.”

So much so, that writing a follow-up proved extremely difficult. “I was blank, empty. No music left in me,” he remembers. “We started this neverending touring cycle, got round the globe twice, made sure we got our music everywhere we could, and in the meantime I began to think of forming a totally different project.”

Nergal paired up with respected English musician John Porter to form Me And That Man, releasing 2017’s Songs Of Love And Death, a pitch-black blues rock record. The two have since gone their separate ways, Nergal forging forwards without him, but the experience had the desired effect. “Within me there was a new breed [of music] that I had to release one way or another,” he reflects. “I’m still very pleased with it. It needed to happen in order to reset my system, to come back to my black metal cave with twice as much strength. I came back as hungry as a wolf.”

Behemoth’s 11th album, I Loved You At Your Darkest, is their most brazenly blasphemous offering yet. The record leaves much of The Satanist’s elaborate song structures behind for something instantly more accessible, broadening their musical horizons while retaining their effortless capacity for infectiously extreme punishment; an anti-Christian super-weapon aimed directly at the cross. “When we started working on it, the band couldn’t stop me,” enthuses Nergal. “They were like, ‘Stop bringing new ideas, we have plenty!’ I was like, ‘No! New song! Next week, new song!’ I couldn’t stop!”

As the band’s creative visionary, Nergal brings the riffs and “the crazy ideas”. “It’s always been like that,” he affirms. “Pretty much every one of our album titles are powerful, one-word statements: Satanist, Demigod, Evangelion, Apostasy. Very straight to the point. I felt we had to reinvent ourselves. We cannot top The Satanist, it’s the ultimate album title, so instead we have chosen to do something that might be confusing!”

He laughs, acknowledging fans might bristle at I Loved You At Your Darkest, a title taken from the words of Christ himself. “How about getting to the root of all evil – the Bible itself – and stealing a quote, twisting it around, and using the tool of the opponent against them? How more blasphemous can you get?” he asks. “When I came across that quote, it reflected exactly how I feel about my heroes – Lucifer, Prometheus, Dionysus, Icarus. All the fallen heroes and outcasts I worship in my art; all who have fallen, just like man is born to fall.”

Nergal gleefully spits in the face of Christianity and all monotheistic religions – those who believe there is only one god – for as he sees it, they are the tool of oppressors shaming mankind into fear of his natural will. Nergal preaches individuality, freedom of thought and spirit. “My philosophy is very humane,” he says, “and this is what art is for – to provoke people, to encourage you to think for yourself.”

God = Dog, the lead single from the record, proved instantly provocative for its overtly blasphemous but, in some eyes, crassly simplistic title. “There’s a lot of people saying ‘God = Dog, what the fuck kind of primitive shit is that?!’” laughs Nergal. “With Behemoth, we easily go from very straight-up, primitive messages to sophisticated ones. I like to play with both extremities. I was driving with my friend Mario in downtown LA and I saw a billboard for [synth goth duo] Prayers. I was intrigued; I’d never heard of them. I listened to their song From Dog To God, and it was amazing. I thought the title was super-cool; it inspired me to play with that concept. I remembered Slipknot’s ‘People = Shit’ slogan. The obvious reversing of the word ‘god’ into ‘dog’ is straight-up provocation, but there’s a deeper meaning – we stole a quote from Aleister Crowley’s The Book Of The Law: ‘Is a God to live in a dog? No! But the highest are of us.’ That’s what the kids’ choir in the song sing. I thought it was so powerful. Writing a song is a puzzle; if it fits, it fits. The last thing you worry about is what will people think. That’s not what true artists do.”

It’s a concept the band are about to take to literal extremes, as Nergal gleefully explains. “We are releasing a very limited amount of God = Dog food – I’m not joking! It’s gonna be vegan, and packaged in the shape of a cross, so you can feed the cross to your dog,” he cackles.

Nergal is used to controversy, especially in Poland, where he is a bona fide celebrity, frequently clashing with the church and the law. He was famously embroiled in a blasphemy trial, following an incident in 2007 where he tore up a Bible onstage, but was acquitted. Last year, Polish authorities accused him of mocking the country’s coat of arms on a t-shirt design, but the charges were dismissed.

“I’m an easy target,” he shrugs. “I’m in the news; if those idiots made a little effort and dug into what extreme metal has to offer, the level of blasphemy would kill them, but they’ll never do it – it’s fucking easier to shoot at Darski. I have no respect for the people that do it. It’s a tax on who I am, on my freedom. I need to pay it and go back and forth to the courts to confront mindless idiots for the fact I do what I do.”

It’s not a fight Nergal, a proud iconoclast, is going to back down from. It’s a battle he whole-heartedly believes needs to be fought. “Poland is going backwards,” he says. “The country has been democratic for only 30 years, but we are losing it already, with a new, church-inspired political approach, conservatives trying to drag us backwards with censorship, anti-abortion laws. The Church is still corrupting our lives; it is the root of all evil. All monotheistic religions are, including Islam, Judaism and Catholicism.”

Of course, his celebrity status has its positives as well as its negatives. “I like it,” he says. “I don’t have a problem with that kind of attention. But I want to point out that I’m a musician; calling me a celebrity is a misconception.”

Since his recovery, Nergal has emerged as one of metal’s figureheads, attributable doubtlessly to the brilliance of their live shows and albums, but in part to his social media presence. Much more candid than the standard, grim posture of most extreme metal musicians, Nergal is unafraid of letting fans see his human side, once the blood and corpsepaint have been washed off.

“A lot of musicians are afraid of getting out of their safety zone,” he explains. “You know, ‘I’m not gonna show my face ’cos I don’t wanna ruin my reputation; I don’t wanna look too nice, I’m not gonna show how much I love my dogs.’ But I’m an extrovert – my face hasn’t been a mystery for decades, why should I hide behind a mask? I have an onstage and offstage persona. I’m making my life art, and I’m fucking proud of it. My Instagram is bursting with my love for life.”

All of this may indicate that Behemoth is increasingly becoming the Nergal show, and that the other members of the band are secondary to his ego. “No, no, no,” he quickly insists. “I really appreciate the fact that even though we’re all different, we are united. I am indeed a driving force of the band, but I know there are partners there, always ready to take it to the next level.”

I Loved You At Your Darkest will doubtless see the band continue in the same vein as they have since their return, touring relentlessly on bigger and bigger stages. As ever with a previously underground band reaching new heights, there will be cries of ‘sell-out’, but they fall on deaf ears.

“We’re not making compromises,” explains Nergal. “I’m not here to say to new fans, ‘Fuck you, don’t follow us.’ I’m here to say, ‘Come.’ I’ve no problem bringing extreme metal to the next level. I’m a Venom and Bathory devotee. Look at what they did in the 80s; they didn’t wanna stay in their fucking cave, they wanted to reach out! That’s exactly our point of view. There’s no limit as long as we don’t compromise our art.”

I Loved You At Your Darkest is out now.