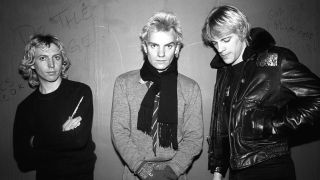 The story behind the song: Roxanne by The Police

The place couldn’t be less salubrious. It’s October 1977 and The Police have rolled up at a flophouse hotel in Paris. Money’s so tight they’re forced to share a room. Outside in the alleyway, between the lurid glare of a sex shop and a dimly lit bookstore, prostitutes sulk around in open raincoats and cheap boots.

“We were supposed to do this shitty little gig with The Damned,” recalls guitarist Andy Summers, “and we’d driven to Paris from Holland in my Citroen Dyane 6. The night before, we all went our separate ways and Sting was wandering around, looking at all the hookers.”

The band arrived at the venue only to be told the show was cancelled and that The Damned “had pissed off back to England”.

Nevertheless, it proved far from a wasted journey. Inspired by a poster of Edmond Rostand’s play Cyrano de Bergerac peeling from the wall in the hotel’s rank foyer, Sting “got this notion for a song that he played like a bossa nova on a nylon-stringed guitar”.

Roxanne, the object of Cyrano’s unrequited desire in Rostand’s tale, provided Sting with a name. The rest came from the scene in the alley. “It was the first time I’d seen prostitution on the streets, and those birds were actually beautiful,” Sting explained in 1981. “I had a tune going around in my head, and I imagined being in love with one of those girls.

“We didn’t have much material and were struggling to put a set together, so when we regrouped to rehearse up in Finchley we tried it out.”

It was drummer Stewart Copeland who suggested changing it to a tango. “We started playing around with it,” says Summers, “and came up with something where I was able to play four-in-the-bar, Stewart put that slight reggae thing on, and Sting changed where he put the bass beats. We worked it up in one afternoon.”

Roxanne eventually turned The Police from motley hopefuls – a jazz-loving ex-schoolteacher plus two renegades from the world of prog rock – into unlikely superstars. Centred on Copeland’s rhythm and the insistent skank of Summers’s guitar, the song drew its charm from a buoyant chorus and the sweet rasp of Sting’s dirty-choirboy voice. It became their first major international hit, although its passage was anything but smooth.

In January 1978 The Police hired Surrey Studios in Leatherhead and set about recording their debut album. The ad hoc nature of the sessions bled into Roxanne itself. At the beginning of the song, Sting fell backwards onto the piano and started to laugh. The band decided to keep it in.

A regular visitor to the studio was Miles Copeland, Stewart’s elder brother. And one song in particular leapt out. “We were a bit embarrassed about Roxanne,” admits Summers, “because this was the raging punk scene, where everything was at furious speed. And we had this kind of ballad. But Miles thought it was great. He took it to A&M, and they wanted to release it. It didn’t become a hit at first, but a few people noticed it, and I think it was John Pidgeon [Melody Maker] who wrote a great review of the song.”

Despite positive press, Roxanne flopped when it was released in April ’78. Its cause wasn’t helped by the fact that the BBC refused to allow it onto their playlist due to the subject matter. A&M’s valiant attempts to turn that into an advantage – hoisting up posters for the single emblazoned with ‘Banned by the BBC’ – didn’t have the desired effect either. The whole episode enraged the band.

“There was no talk about fucking in it, it wasn’t a smutty song in any sense of the word,” Sting bristled later that year. “It was a real song with a real, felt lyric, and they wouldn’t play it on the grounds that it was about a prostitute.”

Roxanne’s progress was further hampered when the band were unable to promote it properly due to their involvement at the time with experimental composer Eberhard Schoener; they’d already committed to recording and performing with Schoener’s Laser Theatre in Germany, and backed him on his Flashback album.

It was only when The Police began playing dates in America that Roxanne gained traction.

“Originally it was picked up by a radio station in Texas,” Summers recalls. “From there it went to WBCN in Boston and this disc jockey called Oedipus started to play it in heavy rotation. Then the song picked up and everyone started to play it. We didn’t have a record deal in the States, but because of Roxanne and this heavy rotation in Boston, A&M in America came to see us. They got it pretty quick and signed us to an American deal. And it all started to unfold quickly from there.”

Outlandos D’Amour sold well in the US, peaking just outside the Top 20. Its success was largely based on that of Roxanne, which crept to No.32 after being released in February ’79. A&M’s UK arm took note and reissued the single. This time it got to No.12. A year earlier The Police couldn’t get arrested. Now they returned home as conquering heroes. Sort of.

“It all changed fast,” says Summers. “We sort of had a year to practise being a rock band, then we started all over again with the same song. It was weird.”

By the end of ’79 The Police were basking in the glow of two No.1 singles (Message In A Bottle and Walking On The Moon) and a chart-topping second album (Reggatta De Blanc). And Roxanne had been the turning point.

“Before Roxanne we were just an unknown band with no legs at all,” Summers concludes. “Then everything seemed to accelerate. It went like a rocket once we started going. That was the really thrilling part of The Police’s history. It was an amazing experience.”