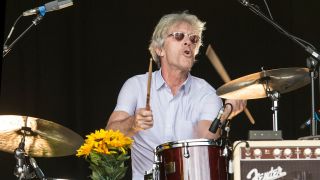 Stewart Copeland is a big fan of satellite radio. The Police drumming legend and composer regularly tunes into ‘60s, ‘70s and ‘80s channels, and in doing so, he’s developed a newfound love for a number of groups and artists who passed him by the first time around.

“The Electric Light Orchestra is a great example,” he says. “That stuff was the enemy when I was growing up, and it was the opposite of everything I was trying to do. It was slick, it was produced, it was for the masses, and it was not for me. But now Jeff Lynne is a good buddy of mine, and I’m like, ‘Dang, that guy’s got some talent!’”

Copeland has also become a convert of the early ‘70s band Hawkwind. “I did a million gigs with them when I roadied for their support acts,” says. “To be honest, they always kind of sucked live. They never got played on the radio, and I never listened to their albums. Now I listen to them, and I think they were way ahead of their time. They might have sucked on stage, but in the studio they really rocked. They had a unique sound. Hawkwind – who knew?”

“It’s always been about The Song,” he says. “Even if a band is established and popular and they put out an album that doesn’t have ‘the song,’ they’ll fade. Led Zeppelin famously never put out a single, but that was the apotheosis. After them, it went back to song culture. I don’t think the album format is a huge loss, although there is benefit to filler tracks. Sometimes that experimentation yields things you don’t get with a hit single. So hearing myself speak, I find myself learning toward album culture.”

Below, Copeland runs down his picks for the 10 records (make that 12) that changed his life.

“We start off kind of sophisto, because that’s what I was exposed to. I can’t remember the orchestra or conductor because it was so long ago, but on one side of this album was Debussy with La Mer and on the other side was Ravel’s Daphnis et Chloe.

“To this day, even though I have the scores to both of these orchestral monuments, I still can’t tell them apart – they both form one piece to me. For me, the cool thing about Ravel and Debussy is that they’re so atmospheric, mysterious and counter-culture.

“I heard this music when I was about seven, and it was the first time I wanted to close the door, turn out the lights and go off into a revere.”

“The punk rock of its day. It probably sounded like hell the first time it was heard, which explains why the audience almost burned down the building, wanted their money back and tried to string up the composer.

“The music is very difficult, and it involves using the instruments in ways that are totally unnatural. For instance, the bassoon is way out of its register. The notes exist, but nobody plays the thing like that. It’s one of the most important themes of the piece, and so now any student bassoon player can play it – it’s part of the bassoon world. The first time it was played, however, I’m sure the guy didn’t nail it at all.

“The rhythms are so truculent, and they change capriciously from one to four to five to six to two – it’s all over the place. Now we hear it played perfectly, but as I said, when it was first performed in Russia, it sparked a riot. But that’s what I like about it, how rhythmically and sonically complex it is. It just doesn’t know how to behave.”

“Now I’m 12 and I heard my first rock band. The music was easy to understand, and it had that thing that punk rock later discovered, which was, ‘Hey, I could do that!’ I got every element of it. It was fun and accessible.

“I would turn off the lights to listen to Debussy, but with the Kinks I would turn the lights on and bounce all over the room. I loved the first album, but I think the band pretty much jumped the shark right after.”

“It was pretty much about the one single, Let There Be Drums. When I heard the sound of those drums – I said, ‘Goddamn, that is the coolest fucking thing ever! Gotta do that.’ And that’s when I started banging on drums.

“Funny thing is, I listen to this as an adult, and I think, ‘Wow, that sucks.’ It’s the opposite reaction that I have nowadays to somebody like Tom Petty, whom I’ve come to appreciate more with time. The album of the same name is full of a lot of not-great technique, but on the single it all comes together. And that’s nothing to be sniffed at – he did create a life-changing two and a half minutes.”

“Because I was now into drums, my daddy turned me on to Buddy Rich. This opened up all kinds of possibilities. My daddy was a jazz player, so he got me into music classes, where suddenly I had to learn proper technique and things like that.

“Once the lessons began, it was all about Buddy Rich: ‘Oh, my God, what he can do on a drum set. He’s fantastic! The power and the majesty of it.’ It was all going great for me and my dad. We were a happy father-son jazz duo, until Jimi Hendrix came along.”

“Jimi Hendrix fucked everything up. That was it for trumpets and trombones. Now it’s gotta be guitar with a row of giant Marshall amplifiers. I would sit in class and draw Marshall amps, which was pretty easy to do, actually, even with the angled top cabinets.

“Mitch Mitchell blew me away, of course. Just recently I was on a plane and I watched the Hendrix documentary about the Isle of Wight. It’s one of the only live recordings on which you can hear the drums; on all the bootlegs the guitar is so loud. And you can see Mitch playing – the shit he did was remarkable. All of this stuff I did that I was rather proud of, I thought I came up with it. But no, I got it from Mitch.”

“This album goes right along with Jimi Hendrix, as I discovered it around the same time. It’s another rock trio – guitar, bass and drums – but man, they sure did a lot with that. And Ginger Baker is a big hero of mine.

“My dad was impressed with the musicianship of Cream, along with Hendrix. He didn’t get all rock music; he was of the mind that people playing rock should strive for something other than crass simplicity. Even so, he could hear the chops in Cream.”

“Now it was all rock music. Pretty much the only bands for me were Cream and Hendrix. I have more of an appreciation for Led Zeppelin now than I did then. Those vocals – ‘Squeeze my lemon, baby’ – I just couldn’t get it. Now I can listen and I hear the artistry of Bonzo and Jimmy Page, but those vocals didn’t do it for me.

“The next record that changed things for me was Frank Zappa’s 200 Motels. Here’s where the marriage of orchestra and rock music took place for the first time. Orchestra had been used in pop music but only as a little sugar on top, except for Ode to Billy Joe – that was beautiful and mysterious. Leaving that aside, this was the introduction of orchestra and rock band. Where Zappa got those chops, I have no idea.

“I’ve seen the film five times – on acid, on Ecstasy, although then it was called MDMA; I don’t think I ever did the peyote film experience because that involved throwing up, and the timing is tricky. I think I saw it straight, but I can’t remember. It was still great every time.”

“Somebody in my college dorm had this record. It’s only acoustic guitar, and it really took me back to what you can do with just one instrument. A whole change of direction came about because of hearing this album. The richness of it made me pick up the acoustic guitar again and figure out fingerpicking, although I never really got that great at it.”

“This record blew my mind. Minimalism. My mother turned me on to it. She heard it on BBC Radio 4 and said, ‘Stewart, you have to listen to this.’ It had this amazing minimalist harmonic sensibility, but the structural revolution was that there was no skeleton. There were no turning points – the music starts, and it’s this repetitive ostinato, like the ringing inside your mind. It evolves incrementally, with tiny little changes appearing and little colours blossoming.

“You’re always listening, even though it’s highly repetitive. Each little change has a huge dramatic impact because of the minimalism. Orchestras hate to play this stuff because they get lost in the repetitive nature of the music; it takes a lot of concentration to tackle music that doesn’t change that much. Musicians aren’t used to it – they go into a trance or something.”

“John Adams took the minimalist movement and re-introduced a skeleton and a recognisable form to the music. It still had a minimalist harmonic sensibility and that feeling of incremental change, but suddenly it was like, ‘How about we do something REALLY FUCKING BIG? Ba-dada-boom!’ Because why the fuck not?

“So Reich would say, ‘How about if we don’t do that, because look how beautiful it is?’ But Adams, said, ‘Got it. Check. But how about if you do put in a big ba-doom-bah?’ It was the best of both worlds.”

“Not because it was the best album, but because of what it meant to the punk wave. Punk wasn’t the watershed of the hippie wave of the ‘60s, which was much more dramatic – trombones gave way to electric guitars, short hair grew long – but even so, the watershed of punk was quite important.

“With punk, the music didn’t change – it was still rock, based around guitar, bass and drums – but the subject matter and the attitude changed. It went back to being angry. The hair changed, too, going back from long hair to short.

“To be fair, the Sex Pistols were the seminal band in the punk movement; they were the act that caused this watershed moment to break. But it was the Clash who made the first great album out of that movement. They still used the same basic rock tricks, but they did a lot with them.”