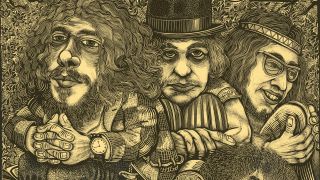 Jethro Tull’s Stand Up was a pivotal album for the band. The first album to feature new guitarist Martin Barre, it marked the point where they shook off their original incarnation as a blues band and began to fully embrace the burgeoning progressive rock scene. It also came housed in an iconic pop-up gatefold sleeve featuring striking artwork from US artist James Grashow.

Grashow was a young art student in New York City specialising in woodcuts when he got a call from Tull’s manager Terry Ellis asking if he would be interested in designing the cover for their new album.

“I have to be honest, I hadn’t heard of them,” he Prog as part of this month’s epic cover story on the making of the Stand Up album. “A friend of mine at school knew Terry and told them I could be great. I’d done things for magazines and advertising, but never an album cover.”

Ellis and Ian Anderson really liked the idea and sent a limousine to pick up Grashow and drive him from his apartment to New Haven, Connecticut, where the band were playing. “I was so excited, I’d never been in a limousine before,” he says.

They told Grashow that they wanted a drawing of the band that popped up when the gatefold album was opened. “I think to this day Terry Ellis and Ian Anderson are discussing whose idea it was to have the pop-up in the centre,” he says. “But I wanted to make them sitting down on the cover, standing up in the centre, then walking away on the back cover.”

Grashow says the process of creating the artwork took two or three months of work. Anderson dropped by his apartment at one point. “Here’s this English guy in red leather pants, fuzzy hair, looking completely out of place.”

In subsequent years, Grashow has seen his work on everything from T-shirts to rugs. “I’m lucky to have done something so iconic,” he says.

Of course, there’s one element of the cover that has kept Tull fans curious for years. Look closely and you’ll see that Ian Anderson has 11 fingers rather than the customary 10.

“I was just cutting away and didn’t notice,” says Grashow. “After it got published, I started getting letters from all over the world asking what it meant. I can imagine people sitting round, getting stoned, counting the fingers and asking what the significance of the 11th finger was.” And was it significant? “No,” he laughs. “It was just an accident.”

You can read Anderson and former Tull guitarist Martin Barre’s in-depth recollections of making Stand Up in the new issue of Prog magazine. You can buy the issue online here. Or use our store finder to find your nearest stockist.