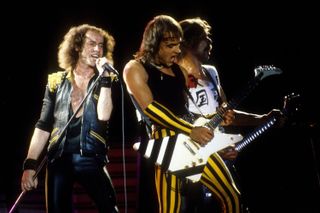 Now everyone is waiting for headliners the Scorpions. Backstage, Metallica are stretched out at a table. Their bassist Cliff Burton is chatting amiably about Lynyrd Skynyrd, when… “Come and look at this!”

Metallica drummer Lars Ulrich is standing up, his mouth wide open. And no wonder. The Scorpions have just come out of their dressing room, and got into two limousines drawn up right outside to chauffeur them to the stage – a distance of… ooh, let’s say about 50 yards.

All of us seated at that table with Metallica get up and join Lars peering at the faintly ridiculous sight.

“Hey, man!” shouts frontman James Hetfield in the direction of the German rockers. “Lost the use of your legs? Crazy fuckers!”

“Is that how rock stars are supposed to act?” asks an incredulous Ulrich. He turns to me and says: “If we ever act like that, kick my fucking ass, okay?”

It’s a preposterous situation. The limos are probably longer that the distance to the stage. The drive takes all of… maybe 15 seconds.

The next day I meet up with Rudy Schenker, Klaus Meine and Herman Rarebell from the Scorpions for an interview. I can’t help but ask what the hell the infamous limo jaunt was all about.

“We are headliners, right?” begins guitarist Schenker in a serious tone. “We have to act like headliners. What do you expect us to do, walk?! That’s for support bands. This is what we did when we were supporting. But we are the last band of the day. The fans expect us to arrive in style.”

“But the fans didn’t see you,” I protest. “Only people backstage. And they were all laughing.”

“Really? Laughing at us?” says singer Meine, almost shocked. “But why did they laugh? We weren’t being nasty to anyone. We treated all the bands on the bill with respect, and they laugh…”

“They have a point,” admits drummer Rarebell, struggling not to smile at the incredulity of his bandmates. “Come on, guys, I’d have been laughing if I’d seen even Led Zeppelin doing what we did.”

So, whose idea was it?

“Dunno,” shrugs Rarebell, almost enjoying the situation, as Schenker and Meine are still reeling from the revelation that their band – at the time one of the biggest rock names touring America – may have actually become an object of ridicule. “Ask our tour manager. He’s English, so perhaps he decided to take the piss out of us Germans. You English are always doing it, ha!”

So that’s it. The Scorpions’ spectacular performance that day overshadowed by a 50-yard limo ride from their dressing room to the stage. Except for one final comment, muttered by Cliff Burton after the headliners had finished the show: “Tell you what. Leave it to Lars and he’ll have us doing the same thing in a couple of years. I’m serious. He was probably jealous.”