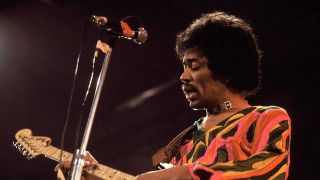 In his last ever interview, in September 1970, Jimi Hendrix said: “I have this little saying: ‘When things get too heavy, just call me helium – the lightest known gas to man.’”

Eight months earlier, in that spirit, Jimi had begun the decade with four New Year performances at New York’s Fillmore East with his newly formed trio Band Of Gypsys, the ‘helium’ vehicle which he assumed carried him away from what he called the “ego-tripping” dead end he’d reached with the Experience, and into uncharted territory.

In a true ‘’Scuse me while I kiss the sky’ moment, everything about Hendrix seemed up in the air. His former bandmates, drummer Mitch Mitchell and bassist Noel Redding, two white English guys, were replaced by black Americans Buddy Miles and Billy Cox. Out went the three-minute hits, in came hard funk jams that expanded to eight minutes or more.

The set-list ignored proven favourites in favour of unheard songs such as Machine Gun and Who Knows, at least half of them still unfinished and untitled. And Hendrix himself, dressed down in a blue silk shirt and bell-bottomed jeans, cut a surprisingly understated figure on stage, eyes closed, digging deep for fiery licks.

A month later, he said: “I consider myself first and foremost a musician. My initial success was a step in the right direction, but it was only a step. A couple of years ago, all I wanted was to be heard; ‘Let me in’ was the thing. Now I’m trying to figure out the wisest way to be heard.”

Engineer Eddie Kramer, who mixed the 1970 album Band Of Gypsys, said: “When Jimi did concerts he was in the embarrassing position of: ‘I don’t really want to get down on my knees and spray lighter fluid on my guitar and put the guitar behind my back and play with my teeth, and put on a big show.’ He obviously was brilliant at doing that, but now he just wanted to stand up and play music.”

And music in the cosmic sense. Beyond personal reinvention, Jimi was now out to reshape the very nature of the rock concert. He hit the stage without a set-list, spontaneously calling tunes to Miles and Cox, often making time and tempo changes on the fly, conducting them with a head nod or raising of his guitar neck. It was more like a jazz gig at the Blue Note than a big rock show at the Fillmore.

By modern standards, this kind of radical deconstruction would be career suicide. Today, stakes are too high, attention spans too short and concert tickets too expensive for an artist three albums into their career to suddenly walk such a public tight rope. But for Hendrix it was the direction his artistic compass insisted he go.

Halfway through Hey Joe, they stopped, and he said: “We’d like to stop playing this rubbish and dedicate a song to the Cream (who had just announced that they had split),’ and they tore abruptly into Sunshine Of Your Love.

As Lulu and her producers panicked, Jimi said with a laugh: “We’re getting put off the air.”

That set the tone for a tumultuous 1969, marked by a drug bust and trial that saw Jimi narrowly escape a 20-year prison sentence; a disaster-laden struggle to build his own studio, Electric Lady; the suspicion that his manager Mike Jeffrey was embezzling money; and the unravelling of the Experience.

The trio, assembled by former manager Chas Chandler, was never one built on bonhomie, and bassist Redding had formed his own competing group, Fat Mattress. Chandler observed that they’d devolved into “three guys soloing at the same time, their former unity gone”.

On his way toward Band Of Gypsys, Jimi briefly tried a bigger group, the Gypsy Suns & Rainbows ensemble that backed him at Woodstock that August. And all of this personal struggle unfolded against an equally turbulent backdrop of civil rights and the Vietnam War.

It was also surely why Jimi looked back for something familiar before moving forward, tapping his old army buddy Billy Cox to join him on bass. The two met in 1960 in the 101st Airborne, in Ft. Campbell, Kentucky, when Cox heard a guitarist who sounded “like John Lee Hooker meets Beethoven”.

They played together in a band called The Kasuals in the R&B clubs of Nashville. “There was a tight integration between Billy and Jimi,” Eddie Kramer said. “Jimi would show Billy a riff, and he would rehearse it until the bass and guitar melded into one instrument.”

To complete the trio, Hendrix chose drummer Buddy Miles. They’d met on the chitlin circuit years before, when Miles was playing with Wilson Pickett and Jimi was with the Isley Brothers. The three rehearsed and experimented in New York studios from October until December 1969.

Jimi told the guys he wanted them to be the earth and water to his air and sky. “They loved to jam,” Kramer said. “In the studio, that’s all they did, just play for hours and hours, experimenting. And running up huge bills. It would be unthinkable today.”

This sense of exploration was inspired by Jimi’s two biggest heroes: Bob Dylan and jazz great Miles Davis. Dylan was a master skin shedder, changing directions and leaving new genres like folk rock in his wake. He was also a Greenwich Village neighbour of Jimi’s, and one day the star-struck Jimi bumped into him on 8th Street.

“Bob, I’m a singer, you know, uh, called Jimi Hendrix…” he stammered. Dylan said: “I don’t know if anyone has done my songs better,” then hurried off. Jimi felt like he’d been blessed by the Dalai Lama.

Jimi met Miles Davis at a hair salon. Davis liked Jimi’s ‘blowout’ Afro and wanted the same. The two musicians occasionally double-dated with their girlfriends. There was mutual admiration, but the older Davis was more of a father figure to Jimi, recommending records and dispensing philosophical advice.

What fascinated Jimi was the way Davis approached his sessions and live gigs. From Davis’s groundbreaking album Kind Of Blue onward, he adopted the approach of providing his musicians with bare-bones sketches of tunes, then let them evolve organically with each player’s personality on display. The live Band Of Gypsys would be released the same week as Davis’s electric fusion album Bitches Brew.

An intriguing aside: in October 1969, Jimi and Miles sent a telegram to Paul McCartney, inviting him to New York to play bass for a collaborative album session. Macca was on holiday and missed the invitation. The session never happened, leaving us with one of rock’s most tantalising ‘what if’s.

The Band of Gypsys’ Fillmore shows supplied material for Band Of Gypsys. The album was part of a court agreement to fulfil the final obligation in a contract Hendrix signed, foolishly, in 1965.

Over the four sets they played, all completely different, the trio displayed a kind of funk telepathy, jamming without much visual interaction, locking into that elusive groove that musicians forever chase – a loose tightness.

If there was one hitch, it was Buddy’s tendency to overdo the James Brown-style vocalising. At times, Jimi looked visibly perturbed by his showboating. At the heart of each set was Machine Gun, which Jimi had introduced six months earlier. Dedicated to soldiers ‘in Chicago and Milwaukee and New York… and Vietnam,’ it remains, as promoter Bill Graham called it, “the most brilliant, emotional display of virtuoso electric guitar playing ever”.

This promising start aside, Jimi’s new direction was actively discouraged by manager Mike Jeffrey, who loathed Buddy Miles, and was angling to get the Experience back together. It was also complicated by Jimi’s drug use and his coterie of enablers.

On January 28 the Band of Gypsys played their final gig, at the Winter Festival For Peace at Madison Square Garden. Jimi was foggy and obviously drugged as opener Who Knows collapsed in a mess. Mid-solo on the next song, his guitar howling with feedback, Jimi stopped, and said: “That’s what happens when Earth fucks with space.”

Buddy and Billy asked for the audience’s patience while they “try to get things together”. But by then Jimi was off stage and doubled over with stomach cramps.

Buddy accused Jeffrey of slipping Hendrix tabs of acid to sabotage the group. Jeffrey fired him, saying: “Your trip is over.” The Band Of Gypsys album was released on March 25, 1970 to good reviews and sales. But Jimi said: “If it had been up to me I would never have put it out. From a musician’s point of view, it was not a good recording. Not enough preparation went into it and it came out a bit grizzly.”

Buddy Miles, who did jail time in the 80s for theft, continued to gig, and found commercial success as the voice behind the California Raisins. He died in 2008 of heart failure. Billy Cox, now 80, lives in Nashville and still tours with the Experience Hendrix Tribute, and will be promoting the anniversary of Band Of Gypsys in 2020.

Jimi’s story, of course, ended tragically. It’s worth restating that he was 27, if only to put him in perspective with similar musical innovators. When jazz great Louis Armstrong was 28, his Hot Five recordings redefined the nature of pop singing.

When Miles Davis was 30, he changed jazz with his album The Birth Of The Cool. Jimi was on the brink of new horizons, and Band Of Gypsys was, as he might have said, “a first step” at not only reshaping his direction but that of rock performances. The spontaneous improvised spirit was definitely picked up in the 70s by the Allman Brothers Band, Led Zeppelin and the Grateful Dead, among others.

A comment Jimi made in September 1970 makes his absence in that evolution more bittersweet: “Thinking that this era of music, sparked off by The Beatles, has come to an end, something new has got to come. And I will be there. I want a big band, full of competent musicians I can conduct and write for. And with the music we will paint pictures of earth and space, so that the listener can be taken somewhere.”