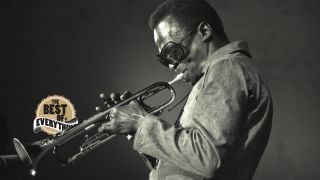 I first got introduced to Miles Davis when I saw a live concert from the early 1980s on TV when I was around 19.

I’d just finished high school and Testament had already recorded our first album [1987’s The Legacy] and as we were going into our second album [The New Order] I already felt like I needed to expand my musical knowledge and vocabulary: I knew I wasn’t just going to listen to hard rock and heavy metal for the rest of my life. And Miles really opened up so many doors for me and introduced me to so many other incredible musicians.

As a listener, Miles has probably inspired me more than any other jazz artist: as a player I might be more influenced by musicians who’ve played with him – initially I was drawn in by guitarists such as Mike Stern and John Scofield and John McLaughlin and keyboard players such as Herbie Hancock and Chick Corea – but in terms of him being an open-minded musician going against expectations, Miles had a great influence. His use of space is inspirational: there are plenty of musicians who can play faster than Miles and play more notes, but he could say more with less, and sound more powerful. As a heavy metal guitarist playing fast is part of what you do, but Miles certainly had an impact on me in terms of trying to say more with less.

There’s so much Miles music to nerd out over, and it’s always a pleasure to talk about him with fellow musicians: Henry Rollins, for instance, has a huge appreciation of Miles, and loves his music just as much as he loves The Damned, say, or Sabbath. It’s astonishing to think that even when Miles became an institution, with an incredible, ground-breaking, revered catalogue, he still kept growing and never got stuck in one style and as a result there are musicians in all genres that have been affected and influenced by him. I don’t see how anybody could not be affected by his music…

SOLAR (1954)
This is from an album called Walkin’, and it’s become something of a jazz standard, being recorded by a number of other artists since. The first version I ever heard was by [guitarist] Pat Metheny, but there’s something wonderful about the original recording, it’s a blues tune, but it’s very sophisticated and classy.

SO WHAT (1959)
This is the opening track on Kind Of Blue, and the album’s quintessential track. It was a very ground-breaking recording at the time, because most of the jazz recorded up until this period had common chord progressions, mainly either the ‘Blues’ progression or what’s known as the ’Rhythm Changes’ progression, where chords move frequently, but here the chords were held for much longer periods of time, which had never been done in jazz and which influenced a lot of rock music too. So What hasn’t aged at all, it doesn’t feel like old music, and when you listen to it, it will put you in a difference head space. If you only ever own one jazz album, you should own Kind Of Blue. Really you should own a lot more, but at least get that one, because it’s crucial.

CONCIERTO DE ARANJUEZ (ADAGIO) (1960)
The last song on Kind Of Blue, Flamenco Sketches, serves as a bridge to Miles’ next album, which was Sketches of Spain, a collaboration with [composer/arranger] Gil Evans. Concierto de Aranjuez was originally a classical guitar concerto by the composer [Joaquin] Rodrigo, and it’s very different from the rest of Miles’ repertoire. It’s very beautiful, and even though it’s played by a large modern jazz ensemble in New York, it incorporates the flavour of Spain wonderfully. Being a guitarist, I had actually heard the original piece first, because it’s considered one of the essential classical guitar recordings, so I already knew the song, but I was very pleasantly surprised when I discovered that Miles had done it too. I recently read For Whom The Bell Tolls, by Ernest Hemingway, which is about the Spanish Civil War, and Sketches of Spain was just the perfect background music for that.

JOSHUA (1963)
In the 1960s, Miles had this terrific output, and several great bands, and this is a track from 1963’s Seven Steps To Heaven. It’s an up-tempo, high energy piece, and has a little bit of the feel of So What, but in the middle it changes to this very fast waltz, so it’s a very unique tune. This band, with George Coleman on saxophone and Victor Feldman on piano, was short-lived – Miles assembled his ‘classic’ quintet with Herbie Hancock and Wayne Shorter soon after – but they just had so much chemistry, right across the album. It’s actually tough to select a best track from this album – the title track is great, and So Near, So Far is beautiful – but I think Joshua is the stand-out.

MY FUNNY VALENTINE (1964)
This is the last of the more ‘traditional’ period Miles songs I’ll pick, and to me it’s a pivotal point with Miles because he’s taking an early jazz standard and playing it in an early new way: it starts out as a ballad, the way it’s normally played, but then it just evolves into a very energetic, exploratory piece, going to places where no-one else had gone at the time. It was recorded in 1964, and you can already feel the influence of rock ‘n’ roll on this recording, and so it’s a perfect bridge between ‘classic’ Miles Davis and the later, Hendrix/psychedelic rock-influenced ‘rock’ Miles Davis.

BITCHES BREW/THE THEME (1970)
Okay, so now we’re into the more psychedelic period, and the track I’m going to pick is a live version of Bitches Brew, from Live At The Fillmore, merged with The Theme, which is a classical ‘Rhythm Changes’ melody. This version is all about intense energy, it almost reminds me of someone interpreting early Black Sabbath but on trumpet and Fender Rhodes, with the chops of these incredible musicians, such as Chick Corea and the British bass player Dave Holland, at the top of their game. The Bitches Brew album is extraordinary, an absolute classic, and it introduced the brilliant guitarist John McLaughlin to the world.

THE INTRO (1989)
We’re getting into the ‘80s period now, and speaking of John McLaughlin, he shows up again on this album, Aura, which is an album that not a lot of people actually talk about. It’s a very unusual album, it actually came from an event where Miles was being honoured with a symphonic composition [when Davis received the Léonie Sonning Music Prize in December 1984], and John McLaughlin plays a key role, but it’s mostly symphonic. The album was conceived by this Danish composer and trumpeter Palle Mikkelborg, and it’s a concept album, an orchestral suite, with one theme explored by each track. The opening track, The Intro, is just amazing, and it was actually one of my introductions to John McLaughlin. I first heard the album on a public radio show which would play experimental music and at first I wasn’t really sure what it was, but it opened up the door to Miles’ 80’s album for me: the music critic Robert Christgau actually called it Miles’ greatest album of the ‘80s and I believe it won a Grammy.

WHAT IT IS (1984)
This is a song from Decoy, and I think it’s a great representation of Miles’ work in the 1980s. You can really heard his funk influence here, it has a very funky bassline, a great slap-funk pattern played by Darryl Jones, who now plays with the Rolling Stones. The guitar player John Scofield is very prominent here, and his playing sounded very modern and fresh and original to me: metal guitar players really lean on the pentatonic scale, but on this tune John Scofield plays licks based on what’s called the symmetrical diminished pattern, and it just sounded so fascinating to me, I’d never heard anything like it. These are patterns I use in improvisations to this day.

JEAN PIERRE (1982)
This has a very simple melody, it’s really just a jam over one groove, but where they take it is amazing. The version of it that I like the most is on an album called We Want Miles, a live recording, and it has Mike Stern on guitar, another great influence on me. You’ve got funky bass, ethnic percussion, screaming lead guitar doing very harmonically interesting things, and then, of course, Miles’ trumpet, which is the jazz element. This sort of music wasn’t always popular with fans of Miles’ early work, but some of us like it all, and this album was actually a gateway for me to Miles’ earlier work: I’d never have discovered albums such as Seven Steps To Heaven had I not heard this.

WRINKLE (1996)
This actually comes from a posthumous release called Live Around The World, and to me it really encapsulates the sound Miles was going for in his later period. We’ve just lost Prince obviously – which is very sad, I was a major fan of him as well – and Miles was very clearly influenced by Prince at this time. I’ve seen a lot of live footage of Prince being shared online and on TV just now, and on this track you can really hear his influence on Miles: if you ever heard Prince doing Housequake, this track almost reminds me of that, except that it’s sped up a bit, and the focus is more on instrumental harmonic explorations than funky vocals. You’ve got improvisers going all kind of places harmonically, and interestingly although it sounds like there’s guitar on here, there is no guitar, instead it’s a bass player called Foley playing piccolo bass. The keyboard player here is a guy called Adam Holzman, who now plays in Steven Wilson’s band, and he’s a friend of mine. We recently worked together on an album called ON for a project called the Jane Getter Premonition, so that’s a link between Miles, modern prog and indeed myself.

Testament are currently working on the follow up record to 2012’s Dark Roots Of Earth, which is due for release later this year through Nuclear Blast. The band will tour the UK in June. For more information, click here.

Alex will also appear at this year’s HeavyCon, which takes place at London’s Excel from September 30 to October 2. Tickets are available here.

Alex Skolnick: The 10 Records That Changed My Life