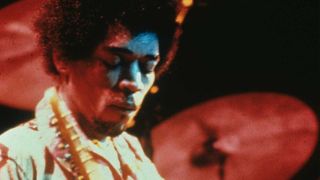 Jimi Hendrix's famous four shows with the Band of Gypsys at New York's Fillmore East are to be released in their entirety.

Songs For Groovy Children: The Fillmore East Concerts will be released on CD and digital November 22, with a vinyl release on December 13.

The collection assembles all four shows by Hendrix, Billy Cox and Buddy Miles in their original performance sequence, and features over two dozen tracks that have either never before been released commercially or have been newly pressed and newly remixed. The set will be available as a 5CD or 8-disc vinyl set.

The four Band Of Gypsys shows took place on New Year’s Eve 1969 and New Year’s Day 1970, and originally found a home on the Band of Gypsys (1970), while further versions were released as Live at the Fillmore East in 1999 and Machine Gun: The Fillmore East First Show three years ago.

All four shows were mixed by Eddie Kramer, who in 2016 said, “To hear this new material, for me, was a revelation. Here was a rhythm section that was so solid. Having had the great privilege of recording Jimi’s first three albums and have them emblazoned in my memory banks, to be confronted with this new direction was kind of shocking, but a natural progression.

“When I heard this music for the first time, I was knocked out."