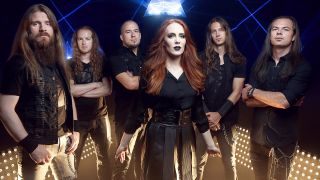 Epica will be releasing their seventh album The Holographic Principle via Nuclear Blast on September 30 and it’s the symphonic metal six-piece’s most ambitious creation to date. Nearly all 12 of its songs are based around the idea that everything in the universe could be a computer-generated hologram. “It’s a serious theory,” says founding guitarist Mark Jansen. “Scientists have come up with this hypothesis that we could be living in a video hologram…”

Mark and lead vocalist Simone Simons lead us through the album’s mind-melting theme, track by track.

Simone: “The title comes from the ancient Greek for phantom or image, and it’s where the word ‘idol’ comes from.”

Mark: “The idea is that after death, it’s all that remains of the body. After I had written the music for Eidola, I felt there was something missing so our keyboard player Coen [Janssen] rebuilt it with many new parts and it became massive. He added an orchestra which gives a cinematic feel and we have all these metal riffs going on. It’s like a wild roller coaster ride.”

Edge Of The Blade

Simone: “The music for this one was written by our guitarist Isaac Delahaye, but the lyrics are mine. I’m singing about self-acceptance and about not concentrating too much on the unimportant things in life. You have to nurture your soul and not focus on being perfect because who defines perfection anyway? A lot of people are obsessed with looks these days but if someone has a good heart, that will always come through. Edge of the blade is another way of saying ‘the tip of the iceberg’; it’s very dangerous to get too wrapped up in unimportant things.”

Simone: “I’m a bit of a movie freak and there were two main movies that inspired our concept: The Matrix and Inception. This song is basically about The Matrix and the idea of manipulating your dreams to create new realities.”

Mark: “The music is written by our drummer Ariën van Weesenbeek. He’s not a guitarist so he writes from an alternative perspective and it brings something different to the table, although he sometimes comes up with guitar parts that are impossible to play!”

Mark: “The lyrics are about robots who decide they want to kill; that is, artificial intelligence that’s programmed to fight in wars without anyone having to push a button. There have been many science fiction movies about robots who can think for themselves, but now it’s really happening. If you can put emotions into robots and create sentient artificial intelligence, what’s the difference between a robot and a human? And what if we’re all robots but just don’t know it? Anything is possible!”

Mark: “This one isn’t actually part of the concept, but musically, it turned out to be one of the stronger songs so it would have been very hard to leave it out. It deals with what’s really going on in the Middle East. The media only give us one side of the story, but when you dig deeper, you find layers of truth about natural resources, like oil, that are influencing the region. The media report on how the new political regime has brought democracy to the region but maybe the inhabitants were better off before. What the West are really delivering is mainly destruction. They’re making people fight each other and when the West conquers, the big companies come in and make money.”

Mark: “Despite the title, this isn’t about the movie! It’s basically about being able to see that you’re in a matrix, to see that you’re in a cage. It’s hard to be able to see beyond your immediate surroundings when you’re trapped so you have to project yourself outside the matrix to understand. Musically, the song has quite a simple structure and the catchiest chorus, but the middle is completely wild. That’s what I really like about it.”

Simone: “I think this will be one of the sing-a-long songs when we play it live.”

Once Upon A Nightmare

Simone: “This isn’t a typical ballad; it’s melancholic and has more of a themed vocal going through it than a chorus. I’m a big fan of classic fairy tales and the lyrics were inspired by a dark German tale about the Alder King, or Erlking, who steals children’s souls. A lot of times, parents don’t take their children seriously, especially when it comes to seeing monsters in the closet so it’s a dark twist on fairy tales. It’s symbolic of being stuck in a life without a happy ending and how our innocence is taken away from us as soon as we’re born. ”

Mark: “These are the lyrics I’m most proud of and they’re about the man beneath the hologram. Machines operate in numbers and code, and you can find similar algorithms in nature, so literally the whole universe as we know it is built on mathematical calculations. When you start seeing the algorithms beneath everything, you start to question: why are we here? What does it all mean? And these questions come up in the lyrics. People have always searched for the meaning of life, but the answers are always the same: love, family, friends and helping each other.”

Mark: “The lyrics deal with waking up and realising that everything is a hologram, but there is a danger that if you truly did find the key to unlock the mystery of the universe, everything would implode. The message is that we shouldn’t know everything. It’s like a computer game, once you know how to finish it, it’s over and it doesn’t make sense to carry on because you know how to win.”

Dancing In A Hurricane

Simone: “This song breaks away from the concept as well. The title comes from a line in Spectre [the James Bond film] and the lyrics were inspired by the current refugee crisis around the world. It’s the idea of children trying to enjoy their childhood in an unsafe environment; they’re literally dancing in a hurricane and I find it very sad. As a mother, I’m concerned about the well-being of children around the world. Here, our children are fed and they have a roof over their heads and I think we maybe take it for granted.”

Tear Down Your Walls

Mark: “This one isn’t really about the concept either. It’s the heaviest song on the album with some brutal parts and I think it’ll be another good one to play live. Everybody has walls around them but if you never break them down, you’ll never make progress or grow.

“It starts with the sound of crows and they’re really important to the lyrics as well. In Shamanism, they’re the keepers of the sacred law and nothing escapes their sight. When we meditate on the crow, we are instilled with the wisdom to know ourselves beyond the limitations of one-dimensional thinking and laws. We’re taught to appreciate the many dimensions of both reality and ourselves, and to learn to trust our intuition and personal integrity.”

The Holographic Principle - A Profound Understanding Of Reality

Mark: “Someone accused us of being a bit pretentious with this title but it’s really just a summary of the concept! If our theory of the holographic principle is true, it would be scary but it would also be exciting because it would change the whole world. Since I’ve been working on this album, it’s challenged my own perceptions and I’ve started to believe in it too.”

The Holographic Principle is out September 30, via Nuclear Blast.