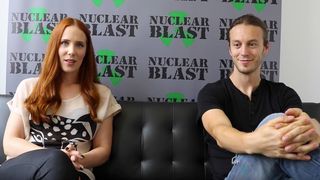 Epica are one of the biggest bands in symphonic metal right now, but where did their education in the heavier (and better) side of music come from? In the below video, vocalist Simone Simons and guitarist Mark Jansen reveal what events and albums led to their indulgence in the dark arts.

Mark says that he wandered into his local record store and picked up Megadeth’s iconic Rust In Peace without ever having heard the band before. He was already a fan of Guns N’ Roses, so made the leap into heavier territory off the back of the album cover alone.

Simone found her calling through her first boyfriend. She listened to the likes of Nirvana and Radiohead but “drifted more into the scene” of symphonic and black metal after being given a Nightwish CD. Simone goes on to explain her “love and appreciation” for women in the scene has grown through the likes of Lacuna Coil and Within Temptation.

Epica’s new album The Holographic Principle is out now, via Nuclear Blast.

Epica's track by track guide to The Holographic Principle