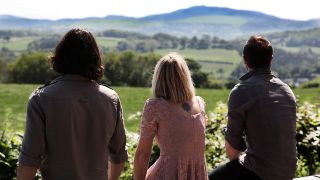 The passing of time can be a complicated phenomenon for musicians.

Songs and albums often serve as a snapshot into a time and place in an artist's life. A decade on, those circumstances might have changed completely – along with them, the relationship an artist has to the work they created will have morphed and evolved.

But musicians stay linked to these albums for the rest of their careers. It's easy to understand why, then, if offered the opportunity, a band might opt to revisit an album, bringing its contents in step with the artist's current reality. We all change as people; why is music expected not to follow suit?

The Joy Formidable have done just that. To celebrate 10 years of their debut album, A Balloon Called Moaning, the band have reissued the record. But it's not a simple re-release – instead, the album has been released as a double album; one platter with the album in its original guise, and the second containing the album reworked into acoustic versions, all sung in the Welsh language.

"We’ve been through such a lot as a band over the years, it’s been a really reflective studio session, returning to the old recordings and transforming them into these beautiful stripped back, intimate versions," vocalist and guitarist Ritzy Bryan says.

"It's exciting hearing them in the Welsh language because now they have new life, too, and can be a celebration of language as well as memory."

Here, Bryan reflects on the album and 10 years passed, one track at a time.

The opening track of the EP and a song that hasn’t left our live set since we wrote it.

I have very vivid memories of recording this track in our little attic bedroom-cum-recording space in West Norwood a decade ago. I came back from my day job as a computer support tech (don’t ask how I got that job!) and I’d spent most of the day skiving, doodling and writing lyrics on free notepads.

Rhydian had been working on what was the beginnings of the TGLITGS demo, including my favourite bit of the track; the synthetic sliding bass line. On a first listen, I was so smitten by the ideas that we just excitedly threw ourselves into it and it was finished, lyrics and all, that night.

It stands out as one of the easiest, most visceral songs we’ve written and an example of the creative intuition that was growing between us both.

We had a good tussle writing this song together, Rhydian and I. The irony is not lost on us, since it’s a song about give and take, and here’s us fighting about the BPM and the ambiences and all sorts of fun things.

Rhydian finished this track lyrically, dedicating the “vicious tongue” line to yours truly. He probably had a point 10 years ago; time the mellower [laughs]... Maybe.

We were in Mold, North Wales when we started dabbling with this one and it’s definitely one of the earliest pieces of music that Rhyds and I wrote together.

We’d been demoing and experimenting with production and instrumentation and Austere was an example of all that coming together. The combination of high melodic bass lines, single note guitars, vocal and guitar ambience, all the signatures of early TJF.

It was dreamlike in its lyrics, a series of characters and their influences in my life appearing and disappearing. And an early indication that as a live band, we were really going to enjoy those long improvised musical sections.

I remember being affected by the subject matter of this track and re-visiting it 10 years on, it’s still emotional. It was written as a reaction to the horrific murder of Du’a Khalil Aswad in Iraq in 2007 and in contempt to the bystanders who were complicit in her death or watched her die.

Since the reissue, I’ve been following this charity madre.org hoping to get more involved next year when we take some time off.

When we wrote this song, I was experiencing a situation where the words came out but it felt like no one was listening. That type of hopeless communication that leaves you feeling invisible. That was the inspiration behind Whirring.

It’s enjoyed many version since its early demo and the same can be said for its live aesthetic, so many twists and turns and arrangements. I think that diversity has stopped me from ever getting bored playing this song live, which I’m grateful for. And now I have a Welsh version to throw into the pot.

It’s a song about love, symmetry and connection. I remember Rhydian suggesting the dual call and answer vocal and enjoying hearing the separation in our voices for the first time.

Some early rags were very quick to presume it was a song about oral sex. Clickbait was just as prevalent 10 years ago. Daft fuckers.

Very much a song about trying to flee a situation and again another early TJF example of managing to merge quite a sad subject matter in a musically uplifting, hopeful way.

It has some really subtle time signature changes which weave around the vocal and play mischievously with the sensibility of drummers. When we started to play it live, I used to enjoy teasing the timing of the “last drop” line, changing the gap of when we all came back in. They used to say, 'How the fuck do we know when you’re going to sing it?' [laughs].

Probably my favourite song from the EP. The original has so many layers, it’s really dense and the vocals try and find space through all the weaving.

I like what we did with the stripped back version for that reason, you can hear the lyrics and the melodies. Plus on the Welsh acoustic version, we added a section of an anonymous Welsh poem called Mi Gerddaf Gyda thi. It’s such a beautiful verse about loving someone unconditionally, 'I’ll walk beside you' – whatever comes.

I remember being in such a dark place when I wrote the lyrics to this song, trying to forgive someone that was remorseless at the time. The poem being added a decade on feels like a happy counter to that now.

The Joy Formidable's 10-year anniversary edition of A Balloon Called Moaning is available now via Hassle Records. See the band live at one of the dates below: