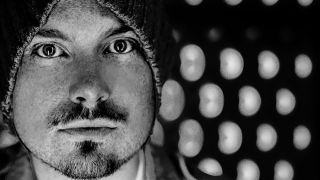 The Holy Road is a new project from Jonathan Stolber, the Northampton based composer and songwriter of acclaimed post-rock band To Bury A Ghost .

Jonathan will debuting his new project with the single The Minotaur, a delightful, Nyman-esque piano-led instrumental ballad which you can listen to below, on Piano Day 2020 on March 28. It's been selected for inclusion in the official playlist. He will release his new album, For The Blood Of England, later this year.

All proceeds from Bandcamp downloads of The Minotaur will be donated to mental health awareness charity Tiny Changes.

Jonathan has chosen his favourite  post rock piano pieces for us ahead of piano day which you can check out below. it makes for fascinating listening.

For more information check out The Holy Road website.

One of the most startling prestigious musical talents to hail from the UK in the last twenty years. A musical teenage prodigy hailing from Aylesbury, Martin recorded the title track to his debut album when he was just a mere 16 years old. The track and accompanying LP of the same name, covered more ground than most major label acts manage in a whole career. The result of a young Thom Yorke swallowing an encyclopaedia's worth of Salvador Dali whilst receiving arithmetic sessions from David Lynch and Trent Reznor. His debut captured the wild abandon not seen since Peter Gabriel/Kate Bush. This track features a beautiful Satie-ish piano waltz as a fragile falsetto weaves over a slow dancing quintet. Produced in perfect collaboration with the astute production of Andy Ross who brought his Blue Nile-esque sonic textures to the table.

Josin - In The Blank Space

Arabella Rauch's (aka Josin) parents were both opera singers. Coupled with a love of Bjork & latter day Radiohead, it's no surprise Josin has produced one of my favourite records of last year. Beautiful pulsating electronic rhythms, avant-garde wavering synths layered under beautiful gentle piano balladry. All topped off with Arabella's completely natural falsetto. Such a stunning voice. Would love to invite her to sing on my record, but def not brave enough to ask!

Dorset's finest returned post Mercury Prize win (for 2000's Stories from the City, Stories form the Sea) with her bleak piano based opus. Harvey's subsequent influence cannot be under looked in the slew of new breakthrough artists. Known for her ferocious guitar & lyrical content, Harvey abandoned her guitar in 2007 to focus solely on her piano performance. Grow Grow Grow (from 2007's White Chalk album) retains all Harvey's hallmarks - menacing haunted lyrical content, skeletal arrangements and desolate vocals. One has to admire her refusal to repeat past formulas throughout her career.

Stood in the pouring rain one wet Glastonbury - I sat mesmerised by Wolverhampton singer/songwriter Ben Christophers. Appearing flanked by a simple cello player and DAT sampler playing back dozens of drum machines and a children's choir - Christophers embodied the spirit of Mark Hollis. Ben's masterclass in use of 'silence' between notes was deafening & completely at odds with anything any other artist seemed to be producing back in 1999. Like Robocop (part man, part Aphex Twin), and produced by one of the best producers in the world David Kosten, Ben's music has been a huge influence. Sounding like forgotten soundtrack to an unreleased Stanley Kubrick feature. Fragile piano reverberates through what sounds like an airplane hanger whilst Ben's tender ethereal voice anchors the endless heartache.

Cave & Ellis managed the impossible in 2009 in arranging piano and quintet to equal the arresting visual treats of John Hillcoat's dystopian big screen adaption. A highly evocative score, I like to listen to this when my arrangements become too dense and muddled and confused. This back to basics approach should ground any lost musician - all it takes is beautifully arranged piano and quintet and a mild dose of terror. If only I had Nick & Warren's magic touch, eh!

As good as the movie The Piano was, it was this beautifully poignant, piano/string arrangements that leaps off the screen for me. The arrangement is deceptively simple. The soaring string section is so subtle and perfectly matched to the piano, its subtlety is startling. Nyman is the archetype virtuoso piano performer and arranger.

Chichester based Hope Of The States elevated themselves to legendary cult like status with the release of their debut LP The Lost Riots back in 2004. Debut single Black Dollar Bills is a strong statement of band intent. Sounding like a more commercially accessible blend of Godspeed! You Black Emperor and Arcade Fire, States captured a zeitgeist like the Manics did some ten years before. Starting as a lonely piano balled, the song explodes into nothing short of cascading ambition.

What can be said about this bands that hasn't already been written before? My choice is from 2011 King of Limbs. Yorke starkly laments over his piano, singing of jumping into lakes as a full Jonny Greenwood string orchestration rumbles into view. Sends chills down my spine every time I hear it.