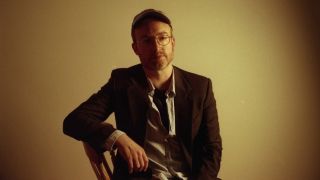 Quite apart from his role as chief songwriter in UK indie-rockers Maxïmo Park, singer-songwriter Duncan Lloyd has dabbled in both a growing number of complex solo projects and life as a busy painter and photographer over the years.

The relationship between music and art is something that's long shaped his career, and can be clearly heard hidden within in the artful intricacies that define his new solo album, Outside Notion. Stuffed full with woozy, delicate strings, lush arrangements and jangling guitars, it's a warming dose of delirious space rock which paints vivid pictures as it goes.

To celebrate the release of the new album, Lloyd takes us through the album art that has defined his sound and vision. Check out his new single, Young Dreams, at the bottom of the page.

"One of my favourite covers from an experimental artist. Simple but effective, makes me wonder how long it took and what’s on all those tapes."

"The Pop Art cover. Admittedly, I was going to choose a warped scene from a Raymond Pettibon design, Black Flag and Sonic Youth being prime examples of having covers that depict the skewed underbelly in pop art form but I really struggled to pick a favourite. Instead I’ve opted for another favourite, Roy Lichtenstein’s cover for I Cry For You by Bobby “O” – self-explanatory really."

"When I first heard Freeway by Kurt Vile I bought this record, there’s something evocative and uniquely American about the sleeve – a thrift shop guitar and amp in an old parking lot. I like it that you can’t see his face and those bowling shoes – nice touch."

"Sun Ra can see what we don’t – that’s the message on many of his covers and I believe him. Even the way this cover was set up seems mystical."

"A cross between a 50s Jazz cover, by artist David Stone Martin, and a Picasso sketch. Sounding like it looks, it’s a great record too – a mix of jazz, folk and experimental. Jim O’Rourke, David Grubbs and the rest on fine form."

"Walking into a record shop the other day I saw this sleeve on the shelf. I hadn’t seen it in a few years and realised that to my mind, it is the most iconic record cover of all time. Still fresh and strong. Grace forever."

"Out-of-the-ordinary sleeves have a naturally appealing quality, and I guess that’s why I like The Ascension. The artist Robert Longo’s work inspired Maxïmo Park’s first album cover, but not before the godfather of the guitar orchestra, Mr Glenn Branca."

"This cover is by Jean-Michel Basquiat. I don’t know what to say – it’s Basquiat, life, art, music and energy in a sketch."

"I laughed when I saw this. There’s some amusing parallels to the Nightclubbing sleeve by Grace Jones – I’d have them side by side on my wall. Good album too."

"Laurie Anderson’s covers have always appealed to me, perhaps because you know she’s doing something different. Björk’s covers have the same power. Of all her sleeves though this one still pops out the most for me. I read that it’s from a film still but it’s the combination of this & the text that make it."

Duncan Lloyd’s new album Outside Notion is out June 7 via Afternoon In Bed Records. Watch the video for lead single Young Dreams below: