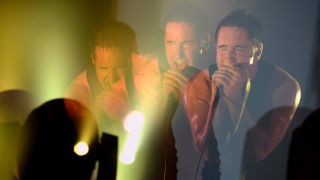 A genre still breathing through some sort of futuristic wormhole (possibly within the grim darkness of the 41st millennium), industrial metal has always been lightyears ahead of the pack. Being the nice chaps we are at Metal Hammer, we fought our way through hordes of Tyranid foes and barely escaped the Hive in order to deliver you the essential knowledge on industrial metal. Lives were lost, but it was worth it.

Arguably where this entire genre manifested, Al Jourgensen’s warped mind was a playground for throat-slitting beats and melancholic riffs. Having introduced electric guitar on the previous Ministry release, The Land Of Rape And Honey, Jourgensen’s admiration for thrash was finally translated to record – hyper-fast guitar work, programmed drum loops and distorted vocals that sounded like Satan being drowned in a puddle of his own piss were all entwined with oddball samples to make for an immersible, obliquely genius work of art. Without Uncle Al, industrial metal would never have been ushered into the mainstream consciousness.

Exhuming a suicidal stomp similar to Ministry’s Filth Pig, well, years before Filth Pig was even conceived, Godflesh’s influence upon the scene also bears great importance. Channelling a much more downtrodden, doomy approach that harks back to fellow Brummies Black Sabbath, the ‘Flesh brought forward a unique racket that was further aided by frontman Justin Broadrick’s stint with grind legends Napalm Death. 1992’s Pure was sprinkled with hints of the extreme; while Ministry were swanning about on the Lollapalooza main stage, it was Godflesh who seemed to be retaining the underground ethics of the genre.

While nowadays Nine Inch Nails are viewed as the Wal-Mart of the industrial world, Trent Reznor’s brainchild remains a vital piece of the puzzle. Having served as a roadie for Ministry and subsequently being inspired (although the poor bastard did get his head and eyebrows shaved in his sleep), Trent dabbled in darkened synth-pop before unleashing the Broken EP in 1992. Uncompromisingly heavy and the most utterly sardonic, nihilistic tome in the Nine Inch Nails canon, Broken still remains as abrasive now as it was twenty two years ago; everyone from Behemoth to Linkin Park has covered Broken’s Grammy-winning single, Wish.

As the music press dropped industrial metal like a lukewarm turd and proceeded to brown-nose the likes of Nirvana and Soundgarden at the height of the grunge movement, KMFDM managed to deliver a commercially successful album without betraying the genre. Showcasing a slightly more accessible sound but making up for it through the sheer density of the boisterous beats and synth-lines, Nihil remains the band’s best-selling and critically revered opus to date. Unabashedly industrial and a producer’s wet dream, the crystal clear punch of Nihil made its way onto the soundtracks of Bad Boys, Beverly Hills 90210 and the utterly dire Mortal Kombat movie.

Basically the godfathers of electro-industrial, Skinny Puppy have never shied away from creating sprawling, spasmodic epics that have more in common with the sound of combine harvesters than actual music. The harrowingly heavy The Process was born in toil: The Pup suffered through the passing hands of multiple producers, Nivek Ogre quitting the band and, tragically, keyboard player Dwayne Goettel losing his life following a heroin overdose. The result is an absolutely vitriolic, utterly intense experience – their record label, according to Key, wanted The Process to sound like Nine Inch Nails… The band were swiftly dropped.

Strapping Young Lad – Underneath The Waves

Taking the neo-industrial blueprint laid down by Fear Factory, Devin Townsend and his merry men extrapolated said formula and shot it into a completely different universe (or omniverse, as Ziltoid would say). Still one of the most extreme albums ever recorded, City’s face-flaying blastbeats and demented vocals will forever be etched in the hallways of rock ‘n’ roll excess. Thrash, death and black metal were all hurled into a smelting pot of industrial madness, tied together in a gory little bow thanks to Gene Hoglan’s now legendary ‘Atomic Clock’ drum patterns.

Although keen to distance themselves from the industrial metal movement (well, they do have an album called Industrial…), Pitchshifter were nonetheless at the forefront. Lacing hard-hitting programmed beats with various punk sensibilities and sneering vocals, the Nottingham innovators rode the same early wave as Ministry and Godflesh, but received nowhere near the same amount of respect and kudos. Crossfaith, The Browning and latter-day Prodigy owe a huge debt to this band – one could argue that Pitchshifter were the first of their kind to properly pull off a concoction of full-on metal and dance music without one overriding the other.

Rammstein were already bending the world over with 1997’s Sehnsucht, but it was the Germans’ following release that truly transformed them into the world-beaters they’re now known as. Armed with riffs muscular enough to bench-press a tank full of weight-conscious elephants, Mutter finally exposed Rammstein’s love for the dramatic; titanic guitars bellowed alongside the baritone majesty of Till Lindemann, whose grandiose delivery was almost unheard of within industrial metal circles at the time. Just take one listen to album highlight Adios and tell us you don’t want to punch the air while riding a large, sabre-toothed mammal into battle. Go on.

Marilyn Manson – Use Your Fist And Not Your Mouth

After going through a weird glam phase and becoming the target of terrified parents everywhere following the Columbine massacre, Manson shunned political motive and went for an all-out, balls-to-the-wall industrial metal album. While his earlier works are obviously drenched with industrial influence, The Golden Age Of Grotesque wears said influence on its mottled sleeve and parades it around in a Mickey Mouse costume – the inclusion of KMFDM axeman Tim Sköld ensured an electronic-laden affair, honing down the Manson formula and injecting a shot of testosterone straight into the monolithic riffs interspersed throughout.

Combichrist – Maggots At The Party

Despite being labelled as ‘aggrotech’ – that can’t actually be a real thing, can it? – on various internet sites, Combichrist are an industrial band, pure and simple. Having gravitated away from dance and toward the pulsating, metronomic side of metal in recent years, the band’s latest release, We Love You, is testament to the longevity of industrial metal. A rollicking slew of tracks that make Rob Zombie sound like a tramp banging a frying pan on his head, this album cements Combichrist within the ranks of the industrial elite.