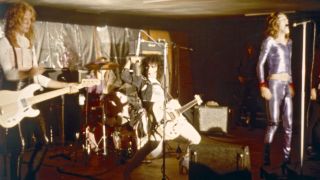 The New York Dolls were the definitive proto-punk band, successfully fusing elements of glitter to a crude street attitude. With a thrift- store dress sense and enough make-up to make your girlfriend jealous, they strutted with drag-queen spunk that screamed camp and kitsch.

Formed in 1971 from the remnants of Actress, the Dolls had their own unique set of toxic twins: Jagger-esque vocalist David Johansen and thatch-haired guitarist Johnny Thunders. Constantly loaded and permanently wasted with reverent Keef swagger, Thunders mirrored his stylish progenitor as junkie icon to a [blank] generation.

With Todd Rundgren producing, this classic, self-titled debut was recorded in just eight days. Underpinned by themes of sex, drugs, alienation and dysfunction, New York Dolls had the balls to pick up where the Stones left off. And whatever the band lacked in proficiency and sophistication they more than made up for with an attitude that spiced their bare-to-the-bones rock’n’roll with a rawness that spoke the same language as disenchanted youth everywhere.

The first 15 seconds of opener Personality Crisis presented a crash course in rock’n’roll urgency: punchy riffage, bawdy-house piano, and a barrage of unintelligible screams that sounded like a subterranean hybrid of the MC5, Little Richard and [inevitably] the Rolling Stones.

The six-minute, sleaze-drenched plummet into sax oblivion that is Frankenstein – possibly the ultimate paean to teen angst and dysfunctional sexuality ever – subsequently inspired an entire brood of awe-stricken grunge offspring. Looking For A Kiss encapsulated the band’s narcotic-fuelled lifestyle, with Johansen snarling ‘I need a fix and a kiss’, as he surfed precariously on the crashing waves of Johnny Thunders’ raucous sonic assault.

On the salacious, driving blues of Bad Girl and the trashy garage grind of Bo Diddley’s Pills, Thunders’ playing oozes purity and finesse. After all, isn’t this kind of organic, unfettered, visceral body-blow music exactly what rock’n’roll is supposed to be all about?

The album’s follow-up in 74, Too Much Too Soon, proved prophetic, as shortly afterwards the band were dropped from their record label. In disarray and self-destructing, the Dolls fell into the hands of nascent band manager and apprentice agent provocateur Malcolm McLaren, who took the ravished, strung-out quintet under his wing and endeavoured [unsuccessfully] to revive their nose-diving career.

Things came to a head on April 25, 1975 when Thunders and drummer Jerry Nolan left for the Heartbreakers and McLaren was unceremoniously dumped. Johansen and guitarist Sylvain Sylvain soldiered on for a two more years before finally calling it quits in 77.

In 1991, Thunders – his body ravaged by years of heroin abuse and in the latter stages of leukaemia – died in mysterious circumstances in New Orleans. Shortly after, died after suffering a stroke brought on by meningitis. Johansen reinvented himself as 80s lounge singer Buster Poindexter. Sylvain ended up driving a New York taxi cab and bassist Arthur Kane went missing-believed-drunk in LA. More than 30 years on, New York Dolls still sounds as dangerous as it did upon its original release and exemplifies chaotic brilliance.

The band returned in 2004, and have continued on, but only Johansen and Sylvain remain from those early days.

Looking For A Kiss