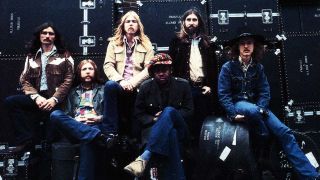 It’s no small feat to single-handedly invent a genre of music. But that’s what the Allman Brothers Band did with southern rock back in the early 1970s. Not that you’d want to say that to certain members of the group. “When I hear people describe us as southern rock I get fighting mad,” said drummer Butch Trucks.

Though they lived in Macon, a city nicknamed “the heart of Georgia,” and spoke with southern accents, when it came to music, the band’s tastes were all over the map: blues, country, rock, gospel, even free jazz.

“We took it to where Cream and the Grateful Dead took it,” said Trucks, “then added John Coltrane and Herbie Hancock to the mix and stirred it a bit, and we were up in places no one else was thinking about.”

Reaching those lofty places took time. The band evolved out of two 1960s-era west coast ventures, the Allman Joys and Hourglass, in which brothers Gregg and Duane Allman had attempts at everything from blue-eyed soul to psychedelia. It wasn’t until they moved back to Georgia in ’69 that they started clicking. Or, in Allman lingo, “hittin’ the note”.

‘Hittin’ the note’ was all about interplay and musical telepathy. And that’s what made the original line-up of the Allman Brothers Band so exceptional on their early records (the best of which, At Fillmore East, remains a strong contender for the greatest live album of all time).

After Duane’s death in October 1971, what followed was a head-shaking, decades-long tale of deaths, drugs, break-ups, lawsuits and even, amid the 20 or so albums they put out in that time, the occasional triumph.

Until the end, survivors Gregg Allman, Butch Trucks and Jaimoe Johanson kept the flame burning with live shows, until Gregg announced that the band would be wrapping things up for good after their 45th anniversary celebrations in 2014. Just three years later, he was dead.

The real spirit and legacy of the Allman Brothers Band lives on not only in classic albums like Eat A Peach and Brothers And Sisters, but also in a sprawling southern songbook that includes Lynyrd Skynyrd, Georgia Satellites, Drive By Truckers, Kings Of Leon and Alabama Shakes. But even at the end they’re still resistant to easy labels.

“I’ve heard that damn expression ‘jam band’ so many times,” Gregg said. “It’s b.s. The Brothers are not a jam band, we’re a band that jams.”

Duane Allman had a word for what the group did on stage: religion. The tenets of it involved a baptism in blues, rock and jazz, coupled with a faith in your bandmates and the ability to testify with your instrument.

This live album, recorded in New York in 1971, not only captured the best of that deepfried divinity (with some clever editing from Tom Dowd), but also pioneered southern rock and defined the art of the jam.

The shows have been reissued in their entirety as The Fillmore Concerts, but the original album stands as the must-have bible for all things Allman. Statesboro Blues, Stormy Monday, Whipping Post… Amen, Brothers.View Deal

‘Bearing sorrow, having fun.’ That phrase from Melissa captures the essence of this masterpiece album. After Duane died in a motorbike crash, the band rallied and made a studio-meets-live double album (including choice leftovers from At Fillmore East) that was part benediction, part bridge to the future.

Every song here is a classic, from the southern soul stirrer Ain’t Wastin’ Time No More to the epic Mountain Jam to Dickey Betts’s uplifting Blue Sky to the delicate acoustic jewel Little Martha. Drummer Butch Trucks called it “the apex of who we were,” and Gregg Allman said it “has the roots of our whole thing as a band”.View Deal

These soulful associations inspired in short order a stylistic revelation, a reunion with brother Gregg and this sizzling self-titled debut album. It’s remarkable how self-assured the group sounds right out of the gate. From the deep, sweaty blues of It’s Not My Cross To Bear to the swirling seven-minute reverie of Dreams, this is the birth cry of southern rock.View Deal

Highlights include the scorching instrumental In Memory of Elizabeth Reed, a rousing Hoochie Coochie Man, the tent-revival strummer Revival and the haunting moonshine soul tune Midnight Rider (as he predicted, the road would ‘go on forever’).

The album was their first to crack the US Top 40. Sadly it was also Duane’s last full album with the band.View Deal

Just two tracks into recording the follow-up to Eat A Peach, tragedy struck again when bassist Berry Oakley was killed in a motorcycle accident. This time it was Dickey Betts who stepped up to lead the charge, pushing his warm, country-tinged sound forward with Jessica, Pony Boy and US hit Ramblin’ Man.

Gregg, preoccupied with his first solo project, added gritty balance with Wasted Words and Come And Go Blues. The result was the band’s first US No.1 album. But there was a downside. “We became rock stars,” said Butch Trucks, “and we lost all sense of why we were doing it.”View Deal

The title refers to a Navajo saying that there are seven times in life when a momentous decision must be made, and a wrong one creates a dead end. After the trials the band had been through, the decision to reunite for the second time turned out to be the right one.

With Tom Dowd producing, Gregg in fine voice and new guitarist Warren Haynes tandem-riffing with Dickey Betts, they sound primed for the future. But it’s not just about reinvention as much as reclaiming past glories, and on the snarling single Good Clean Fun, the countrified Let Me Ride, and the jazzy jam True Gravity they do just that.View Deal

After the last gasp of 1975’s Win Lose Or Draw, the band split and Gregg Allman spiraled into a tabloid hell that rebranded him as Cher’s druggy ex-rock star hubby. This was addressed movingly not only in his song It Just Ain’t Easy, but also in the determination evident in his voice throughout the band’s first comeback record.

Gregg sounds like a convict just sprung from jail, humbled by a second chance in society. Meanwhile, Dickey Betts brought in two members from his band Great Southern, and contributed standout tracks Crazy Love and Pegasus. A record whose charms have increased with time.View Deal

Dickey Betts’s final album with the band is often overlooked (maybe because of an eyesore sleeve, which looks like a dashed-off high-school art assignment). But inside it’s solid Brotherly music throughout.

The ABB’s first album of the 21st century introduced 23-year-old guitarist Derek Trucks (Butch’s nephew) as replacement for the dismissed Dickey Betts. And the youngblood’s back-porch Dobroguitar duel with Warren Haynes opens the album with one of its most affecting tracks, Old Friend.