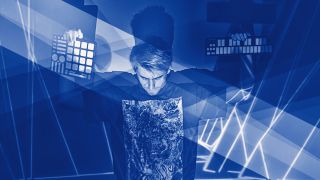 To gain a deeper insight into the mind of The Algorithm (or Rémi Gallego as his mum calls him), Rémi has written us a track by track guide to Brute Force you can check out below.

“Brute Force is a step towards more musicianship and organic feelings in my works,” says Rémi. “While keeping the electronic elements very present I tried to bring human feelings and authenticity to it using two fusioned elements of music I love.”

“The starting point, for me it feels like a launch at hyper speed or something and that’s what I had in mind when I wrote the track.”

“This was the first track with which I started experimenting more with guitars. I think it’s the most straight-forward track on the album and I always love playing it live.”

“pointers again let me experiment with different stylistic techniques and guitar solos even further, I’m pretty sure it sounds like a motherboard talking.”

“I think the most melancholic ‘metal’ track of the album. This is the track I wrote the quickest, surprisingly, and is also one of my favourites. It has a lot of passion in it.”

“This one also has a lot of passion, in a more introspective way. It talks a lot to my melancholic nature and has a very different direction than everything I’ve written so far. It was very interesting working on this one.”

“Probably the most evil song on the album. I can’t wait for when we play it live, it will happen the next tour for sure.”

“Same thing for this one. The synthwave is in general a very good inspiration for my works and it specifically shows a lot on hex.”

“I’ve been a fan of Igorrr since I started making music and he’s always been a great inspiration, I’m so proud to have done this collaboration with this incredible producer. Also a big thanks to Nicolas from Pryapisme for the intro!”

“Again a reference to the synthwave, and also a look back to my early works on tracks such as Decay on my first demo The Doppler Effect.”

“I always wanted to do a twist on my older works. It was incredibly fun doing it – I couldn’t stop laughing!”